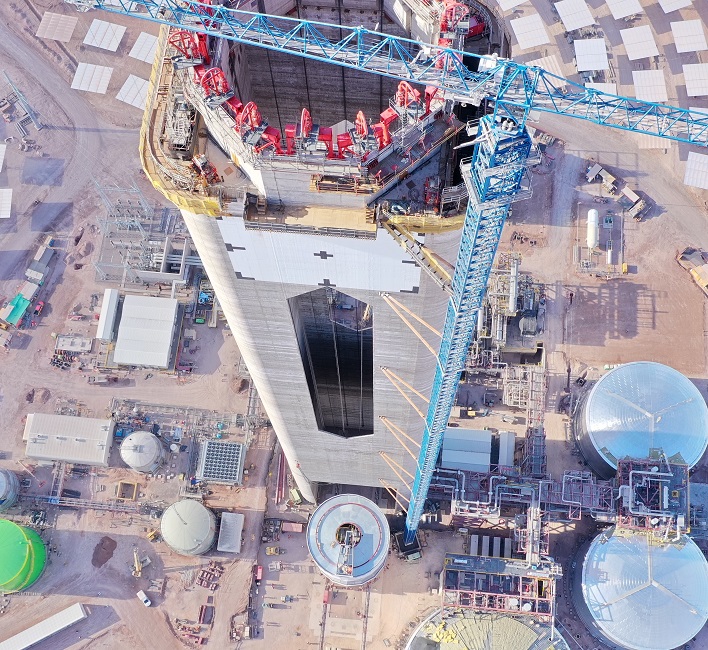 EPC partners Abengoa and Acciona have installed the receiver at the 110 MW Cerro Dominador CSP tower project in Chile, Abengoa said in a statement March 5.

Located in the Atacama Desert and due online this year, the Cerro Dominador plant is Latin America's first CSP plant and features a record 17.5 hours of molten salt thermal energy storage capacity. Owned by EIG Global Energy Partners, the plant will be combined with an operational 100 MW PV plant to supply power 24 hours a day.

The project is being built by an EPC consortium owned by Acciona (51%) and technology supplier Abengoa (49%) under a turnkey contract.

Weighing 2,300 tons, the receiver was installed at a height of 220 meters and will receive solar energy from 10,600 heliostats. Salt melting for the storage system began last month, another key step ahead of commercial start-up.

In July 2018, Acciona and Abengoa resumed construction of the plant following a two-year stoppage. The project was halted in 2016 when Abengoa, originally co-owner of the project and EPC supplier, underwent financial restructuring and transferred its stake to EIG.

Back in 2014, the Chilean government awarded the project a 15-year power purchase agreement (PPA) at a price of $114/MWh.

Since then, global CSP costs have fallen dramatically and spurred interest from energy-intensive companies, including Chile's large mining community.

In December, Cerro Dominador secured a five-year power purchase agreement (PPA) with Chilean fuel distributor Copec. The new PPA will start in July 2020 and supply 50% of Copec's energy needs, reducing its annual CO2 emissions by 19,850 tons. The contract will cover 72 Copec service stations, almost all of Copec's electricity charging stations and eight of its 16 industrial plants in Chile.

Due online this year, the pilot plant will test the technology and will be followed by a larger pilot plant suited to future client needs, it said.

The SaltX system can be charged with electricity or heat and releases steam of temperatures up to 450°C.

In September, SaltX announced tests at a pilot facility in Berlin, Germany had confirmed the "stability and scalability" of the design. The tests were carried out at a 10 MWh facility owned by utility partner Vattenfall.

More specifically, energy efficiency of electrical power to heat was recorded at 72% to 85%, compared to a theoretical maximum of 92%, the company said.

The plant achieved an energy density (chemical) of approximately 500 kWh/ton and an additional 100 kWh/ton "sensible energy" can also be stored in the material, it said.

"Based on the tests carried out in this first-of-its-kind pilot plant with regards to both the overall process and material analyses, the nano-coated salt material can be effectively used as an energy storage medium in a plant of appreciably large-scale," SaltX said.

SaltX would look to "optimize the process and confirm the commercial viability in pre-commercial plants,” Carl-Johan Liner, the group's CEO, said.

Jointly developed with the Moroccan Agency for Sustainable Energy (Masen), the Azelio system can store solar or wind power and dispatch it as electricity and heat.

The design uses recycled aluminum alloy as a storage medium which does not require refilling to maintain its efficiency. The system can provide electricity 24/7 and Azelio is particularly targeting remote customers with capacities of between 500 kW and 20 MW. The design is scalable from 100 kW to 100 MW.

Verification of the Noor Ouarzazate facility will take place this month and will be followed by commercial installations later this year and "volume production in 2021," Azelio said.

In the fourth quarter of 2019, Azelio signed several memorandums of understanding (MoUs) for 184 MW of capacity in the US, Africa and the Middle East.

In September, Azelio announced it would build and test a pilot facility at the Masdar Institute in Abu Dhabi, United Arab Emirates (UAE).

Built in partnership with Abu Dhabi Future Energy Company (Masdar) and Khalifa University of Science and Technology, the facility is due to be completed in the first half of 2020, it said.