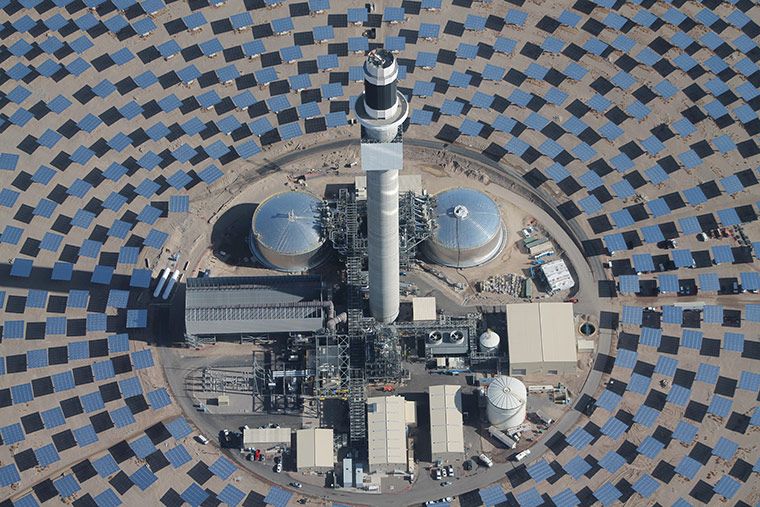 SolarReserve plans to deploy similar technology to that used in its Crescent Dunes plant in Nevada. (Image credit: SolarReserve)

The expedited tender round was five-times oversubscribed with submissions totalling 9.5 GW, Minister of Energy Tina Joemat-Pettersson said in a speech on March 17. Around 6.5 GW of this capacity was for renewable energy projects in the Northern Cape province.

Some 450 MW of the capacity is to be allocated to CSP projects and seven CSP projects were bid, one industry source told CSP Today. The results of the tender are expected in the coming months.

While minister Joemat-Pettersson also reaffirmed the government’s plans to build a 1.5 GW solar power park in the Northern Cape, she said most of the 3.2 GW network capacity between province’s Karoo and Namaqualand areas has already been allocated and future projects may have to make grid investments of their own. All of the CSP projects allocated so far have been situated in the Northern Cape.

“Until more funds are made available for transmission projects, development costs and relevant capital costs to connect IPPs, private investment in the grid remains an option to address the funding and implementation constraints experienced,” the minister said.

Since South Africa launched its REIPPPP in 2011, interest from developers has been high and renewable energy prices have fallen sharply.

Although CSP prices have not dropped as fast as those of PV, the base rate prices for CSP projects have halved, from 3.35 rand per kWh (21.9 cents/kWh) in 2011, to 1.70 rand/kWh in 2015. The REIPPPP also provides a peak rate tariff for CSP plants which offers 270% of the base rate across the evening peak demand period, to incentivize Thermal Energy Storage (TES) systems.

US developer SolarReserve bid for three of the seven CSP projects in the latest expedited tender round: Rooipunt and Kotulu Tsatsi in the Northern Cape, and Kalkaar in the Free State province. The projects, each with a 150 MW capacity, were jointly bid with French utility Engie and would employ the same technology used in the Crescent Dunes plant in Nevada, U.S.

“These three projects are all fully permitted. We also co-bid for three PV projects with NRG. Altogether, those six projects were in excess of $3 billion of investment that we put together for bidding round 4.5,” Kevin Smith, CEO of SolarReserve, told CSP Today.

US developer BrightSource Energy also reportedly bid in the latest round, proposing to build the 150 MW Solis I solar tower in the Van Roois Vley site, Northern Cape.

Saudi Arabia’s ACWA Power said March 15 it has bid to build a 150 MW CSP plant in the Northern Cape.

South Africa’s government aims to procure 13.2 GW of renewable energy by 2025, and aims to build 1.2 GW of CSP capacity. Around half of this CSP capacity was allocated before the latest tender round.

In her speech on March 17, the energy minister said a Ministerial Determination has been granted for the procurement of 1.5 GW through a solar park to be developed in the Northern Cape Province, confirming an earlier government pledge.

The minister noted the Northern Cape has seen "vast interest” for further solar investment, and enjoys sufficiently high solar irradiation levels to support investments in the park. But she also noted that required strengthening of the Northern Cape grid network has not been budgeted for in the current regulated multiyear price determination (MYPD3) for 2017/18 electricity tariffs.

“The Northern Cape offers some of the best conditions in the world for solar electricity generation, and therefore it is not surprising that the province hosts 100% of the CSP and 65% of the solar PV capacity procured in bid windows to date in the REIPPPP in South Africa, contributing 72.5% or 2 112MW of the total 2 992MW solar power in the country,” the energy minister said.

The predicted rapid expansion of South African renewable capacity will require significant reinforcement of the grid network to accommodate new renewable generation capacity, according to an analysis paper written by advisors to the government’s IPP Office and state power utility Eskom.

Eskom’s ability to invest in power plants and grid infrastructure is deeply tied to South Africa's national finances, which have been impacted by sluggish domestic growth and challenging global markets. Eskom has been hit by tariff restrictions in recent years.

Next in line, four projects are underway. Abengoa’s 100 MW Xina Solar One plant is expected to come on stream in the third quarter of 2017. Cobra and Emvelo’s 100 MW Ilanga 1, Engie’s 100 MW Kathu, and ACWA Power and SolarReserve’s 100 MW Redstone plant, are all scheduled to be operational by 2018.

With 12 hours of TES capacity, the Redstone plant will feature the largest CSP storage capacity in South Africa to date. It will also be the country’s first molten salt tower plant.

“Redstone is in the late stages of financing and we’re looking to start construction in the next 60 days,” Smith said.

“We have the debt and equity fully committed and we’re finalizing agreements. It will be our first CSP project in South Africa and will have the lowest tariff cost of all CSP projects in the country, at 12.5 cents/kWh.”

A number of new CSP projects are undergoing environmental impact assessment, as projects must receive environmental authorization before being able to bid in the REIPPPP.

“We have another six CSP projects at various stages of development past the current projects which we may bid in future rounds,” SolarReserve’s Smith affirmed.

Similarly, ACWA Power recently said Bokpoort was the first in a series of investments that the Saudi developer would be making in South Africa’s energy sector and has bid a 150 MW project in the latest round.

Engie, which has a global power generation capacity of 115.3 GW, is also shifting away from coal power development and increasing its investment in renewable energy. Engie was formerly known as GDF Suez.

In an interview with French newspaper Le Figaro, Engie’s chairman Gerard Mestrallet said the Paris-based company would not commit to any new coal-fired power plants anywhere in the world. “All those projects where contracts have not yet been signed will de facto be suspended,” he said. These include a 600 MW coal-fired plant that was planned for South Africa.

Engie has almost reached financial closure on the Kathu plant, its first CSP project, and it has also bid multiple wind and solar projects in South Africa.

Engie is not alone; the positive sentiment is shared by many IPP players.

“From our standpoint, it’s one of the best structured in the world,” he said.