An old project, built three decades ago in California holds the answer to an interesting question: How do the costs and performance of ageing CSP compare to energy from other ageing power plants, once the capital costs have been paid off? 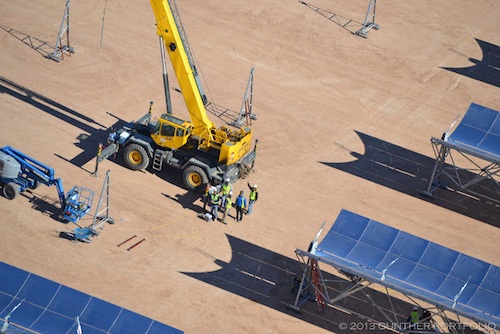 Solana is a new Parabolic Trough plant under construction in the USA. Photographed by Ed Gunther

In time, energy plants grow old. Today’s new renewable energy projects will one day be old, like the old coal and gas plants we are more familiar with. How will their energy production and costs to produce energy compare with the older forms of energy as they age?

Frequently, cost comparisons between renewables and fossil energy fail because they compare apples and orangoutangs. The price of power from a new renewable project - that is still paying down initial capital costs - gets compared with an old coal or natural gas plant - long since paid off.

But in the Solar Energy Generating Station (SEGS) project in Southern California, we do have an apples to apples example, because SEGS was built almost three decades ago, like many gas or coal plants. The 9 SEGS plants have now been providing clean, renewable energy to the California grid since the 1980s. So, for CSP, or “solar thermal”, we do have some results, in performance and price.

The holder of the power purchase agreement (PPA) for the nine SEGS plants is Southern California Edison (SCE). CSP Today asked about the PPA price paid for its energy generation, and whether now that now that SEGS is older, it’s a lower rate.

“We used to own the SEGS project at the very beginning, then later sold them off, then bought them back through PPAs,” says Marc Ulrich, who as VP of Trading and Energy Operations, attempts to get the best prices for power for SCE customers. “We are not the owner or operator, we just buy the electrons.”

He was surprisingly frank about their PPA with SEGS.

“SEGS are getting paid about 6 cents a kilowatt hour, for energy they deliver to SCE. I rounded it up: it’s current rates are 5.57 cents, during the winter period. Next month in June we’ll go into summer period and prices will change again.”

This is quite a bit lower than the estimated 9 to 15 cent range for current PPAs being signed by California utilities for new solar projects, but Ulrich points out that - as with PPAs for gas at that time in California - there was also a fixed cost paid in the original SEGS contract (a figure that he could not locate).

New renewable projects don’t have this split PPA, with both energy and capacity payments, so the comparison is a little murky. But he sees SEGS as very competitive with new solar.

“We encourage any renewable resources in our portfolio to compete against other potential renewable resources for new contracts,” says Ulrich. “So when those contracts expire for the existing renewable fleet, we encourage them to participate in our competitive solicitation.” He adds that as plants age out of the initial costs, a PPA should be able to bring in enough revenue for upgrades, and that appears to be the case with SEGS.

Capital expenses are paid off

Cogentrix is the current owner of 2 of the 9 SEGS. General Manager Brad Bergman says that they have been able to make improvements at SEGS I and II, also known as Sunray Energy.

"As the plants have aged, the cost of operations shifts from recouping the initial capital investment to maintaining and replacing ageing equipment," says Bergman. "As we replace older materials in the solar field, we are able to take advantage of newer, advanced components that more efficiently convert the sun’s energy into electricity."

As NREL’s CSP Program Manager, Mark Mehos has informal knowledge from interacting in the course of his work with the past and present owners and operators of the 9 SEGS plants. The National Renewable Energy Laboratories (NREL) does extensive research and testing of CSP (along with other renewables).

"My understanding is that the performance of the SEGS plants have significantly improved over time," he says.

"This is due primarily to replacement of first generation receivers with newer receivers that are much more efficient. O&M practices at the plants have also improved over time based on the now long history of operating these plants, resulting in increased output in addition to reduced O&M costs."

This suggests that even at six cents, the PPAs are still yielding enough for upgrades.

One firm that has looked into the energy generation over time of the CSP plants now under construction is SolarReserve, which is now building several of the largest of the US CSP plants, tower projects with molten salt energy storage.

"We have predictions on things like degradation and those things, and for CSP projects, if its maintained properly, you should have pretty good performance for the lifetime," says CEO Kevin Smith. "You have a mechanical steam turbine on the back end, which if it's maintained properly, there's very little degradation. You may get a little bit of degradation in the mirrors, but generally the mirror performance is pretty solid for the life of the project."

Smith points out that while there is little performance degradation with age in CSP, what there is, is not as costly as it is for ageing traditional thermal energy plants. Looking just at costs (and not accounting for pollution and carbon constraints) it can be more costly to operate an older coal plant than a CSP plant like SEGS.

"Those are issues you don’t have with a renewable energy facility," he says. "There is no fuel. So even if SEGS is a little bit less efficient, it doesn't really cost you money because you're not buying fuel. You're using wind or the sun as your fuel source.” Once the debt is paid off, it’s cost-effective to continue to operate renewables indefinitely, unlike plants that must buy fuel to operate.

If old CSP compares favourably with old coal or gas, it is also likely going to be attractive when compared in an apples to apples comparison with old PV, when both are likely to have their capital costs paid off, for two reasons. One is the separate value of its storage capability, a value which will likely grow as we add more renewables.

SolarReserve’s Crescent Dunes Tonopah project, now near completion, stores and ships power, for a 25-year PPA with NV Energy that requires it to start specifically at mid-day and shut down at midnight; for what CEO Kevin Smith describes as "the late risers in Las Vegas."

In January, its Rice Solar Project in California was approved by the CPUC, with enthusiasm. Commissioner Florio said "Eight to ten hours of fully dispatchable storage is quite impressive and offers significant benefits to the system, that we don't yet know how to quantify fully, but there's definitely value there.”

This ability to store power for a particular utility’s specific needs is a big draw for CSP, compared with PV, making it competitive with the traditional thermal sources - yet without their fuel costs.

“SEGS I is uniquely positioned to take advantage of advances in thermal storage, giving it the option to provide dispatchable energy, or to time-shift generation to meet the peak-demand needs of the grid,” says Bergman. “Since it was originally designed for the first generation of thermal storage, it is still configured to store thermal energy from the solar fields and later send that energy to the power block for conversion to electricity.”

The second reason that CSP holds up better over time than PV is because it doesn’t have the annual loss of efficiency, at the rate of about a half percent a year, that means that at the end of a 25 year PPA a PV project will be producing about 12 percent less power than when it began.

As Smith points out, "CSP is unlike PV, where you'll get degradation in performance over time."

When it comes to ageing, compared to the various alternatives, CSP would appear to be a beauty that doesn’t lose its bloom.