The process of testing each of the systems that comprise the Crescent Dunes CSP project is going smoothly for an old hand at power plant construction; SolarReserve CEO Kevin Smith. As construction nears completion, we check in on what the future holds. 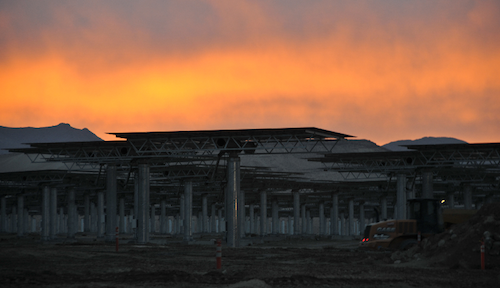 SolarReserve has completed the initial calibration on the first 1,000 out of the 10,000 heliostats in Crescent Dunes; a process that is ongoing. By May this year, construction of the plant is expected to be completed.

At the end of last year, SolarReserve began the commissioning activities for the 110MW Crescent Dunes tower CSP project at Tonopah, Nevada, marking the last nine months of construction for the three-year long project; the first CSP tower project with storage in the US, and the largest globally.

“Commissioning a facility like that is kind of a six to nine month process,” says Smith. “One of the biggest tasks is commissioning the ten thousand heliostats. We’ve done the initial calibration on the first 1,000 out of the 10,000; that is ongoing.”

“Even just melting the salt,” he says. “That’s about a two-month process, to melt about 70 million pounds of salt.” As we spoke, that process was just about to start. Once melted, the salt stays melted for the life of the project and just gets cycled through the receiver for reheating.

“We will probably be pretty much complete with construction by May of this year,” Smith calculates. “The commissioning activities kind of start to dovetail as the systems start getting complete, as some of the additional systems start coming online.”

The process of commissioning a power plant is not new to Smith, who has been building and operating conventionally fuelled power plants for 30 years. Concentrated Solar Power (CSP) shares the ‘back end’ technology – the turbines and power block, with fossil energy generation.

The siting, permitting and now the commissioning have all been a process with little drama for the six-year-old company. SolarReserve sited Crescent Dunes in an environmentally benign and extremely isolated area of Nevada, a four-hour drive north of Las Vegas, and it was permitted without incident. Its commissioning is similarly free of drama.

“So far things have gone along fairly smoothly,” he says. “We’re just completing construction so we are in the early stages, and until we get all of the systems operating we’re not going to have a really good understanding of whether there’s any surprises. We certainly don’t expect any.”

Smith’s conventional generation experience provides a basis for comparisons. He says that while a coal or a nuclear plant takes longer to commission, CSP takes a similar time as a natural gas power plant.

“Even a conventional power project is going to take a good six months for the commissioning process - even if it’s a simple gas turbine combined-cycle,” he says. But once operating, the differences emerge.

“There’s no fuel, so there is no efficiency upgrades that are mandated because of emissions,” he explains. “We’re certainly going to be looking at areas for upgrading the facility, but once the facility is built, there’s no capital cost. We will be unaffected by those environmental requirements that we would have in conventional energy.”

US prices for natural gas are currently at new lows at just $4 to $5 an Mbtu (Million British thermal units). With fuel prices so low, the cheapest option for power generation is to continue to operate existing gas plants. They have recouped their capital expenditures, and they can sell power at between 4 and 5 cents a kilowatt hour.

It will be 25 years before Crescent Dunes - and the other CSP projects being completed in the US thanks to the Recovery Act - are in that position. But it will happen.

“A solar project for instance isn’t necessarily going to have to be dismantled after 20 or 25 years,” says PG&E spokesman Denny Boyles. “I would expect that some of these projects will submit for a new power purchase agreement.”

The only CSP project to have entered a second round of 25 year PPA agreements to recoup costs is the SEGS project built 30 years ago in Southern California by Luz.

“Anything new; whether it’s natural gas or renewable, is going to have a lot of additional costs - permitting, siting, capital costs and investment financing costs that older plants that have been around for many years don’t incur anymore,” says Marc Ulrich, VP of Trading at Southern California Edison (SCE).

“Any old plant - even a renewable plant - is usually fully depreciated. So to the extent that it can still operate, it’s a very cost-competitive power plant.”

Ulrich pays under 6 cents a kilowatt hour for power in a new PPA from the 30-year-old SEGS project; about half the price for CSP from a new plant. Similarly, power from a newly built natural gas plant would be more expensive.

“If you build a new natural gas facility today, and you include all of your costs, including capital costs and O&M costs, that’s going to be more in the 7 to 8 cents a kilowatt hour range,” says Smith. And his estimate does not include the potential for gas prices to escalate during the 25-year life of a PPA with a utility.

Natural gas prices are extremely volatile. Smith built his last natural gas plant with Invenergy - a 570MW combined-cycle project in Ontario - a year before joining SolarReserve as one of the company’s founding executives.

“I built a natural gas-fired project in 2007, when natural gas prices were around $15 an Mbtu,” he says. “Natural gas is probably the most volatile fuel that exists. Ten years before that, it was $3.”

Historically, US natural gas prices have been demand driven, like oil prices.

Since 2006, electricity use in the US has dropped, and with slack demand, the price of natural gas has also dropped. The US currently has low prices due not to the advent of fracking technology, as some suppose, but because of low demand. And in the future, as coal plants are retired, US natural gas prices could rise again.

It is also likely that with the increased global demand for natural gas, the US will be exporting natural gas in the near future, creating significant spikes in gas prices over the next decades. Even now, there is upward pressure due to events in Russia.

“I’m sure the Europeans are getting a little nervous. I think Europe; a third of their energy comes from Russia, so I’m sure they are going to be looking for alternate suppliers,” he says.

SolarReserve plans to maintain an ownership position in Crescent Dunes over the long term, as one of three investors along with Spanish engineering and construction company ACS Cobra and Spanish banking firm Santander. With none of the drama of fuel price fluctuation, CSP looks like a better bet.