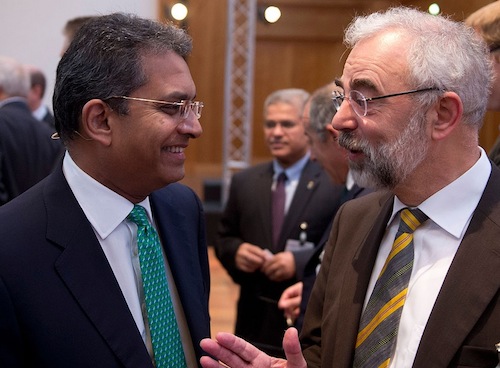 The eight-year-old Saudi electricity generator and desalinated water producer has just under 300 MW of renewables in work since setting a 10% renewable goal three years ago, but its capacity and appetite for renewables would entail owning and operating 3,500 to 4,000 MW of renewable projects by 2017.

For both the CSP bids you won in Morocco and South Africa, you chose trough. What do you see as the advantages of trough over tower?

The only advantage of trough over tower today is that trough is a proven technology. It’s bankable. The technology risk has been minimised, whereas tower is in its early days. So a certain amount of experience needs to be built up in order to be able to have the confidence to develop large plants. That’s pretty much the only advantage.

Now in the medium to long term, subject to tower being operated successfully, my personal view is that tower will become probably the technology that develops in much more scale going forward rather than trough.

But I don’t necessarily want to eliminate trough from the portfolio, because in our view there is a lot more advancement possible even in trough so you don’t want to write it off. The whole world of composites has yet to be fully explored or discovered. Right now its glass or aluminium but going forward I expect to see more composite materials.

These are lightweight, unbreakable, stronger, so that over time they will become more competitive to manufacture so it’s a lower cost. But a lighter foundation and lighter weight also creates another problem: wind. There’s a lift so you need to pin it down. Lots of pluses, some minuses too.

The point is there’s a lot of scope for improvement in all the technologies, so its early days to pin your hope on one or the other.

How can you bid CSP 28% below others, like in your Bokpoort bid?

Yes, we did submit a much lower tariff. Frankly, very simply, by focusing on each and every cost element that goes into tariff.

As a utility company - which is what we are - we invest in plants that are very large capital cost, and we recover our money over 20-30 years, so people need to understand that the tariff, whether high or low, is not a profit for immediately today.

We have consistently delivered these kinds of tariffs, for every bid that we have done from the time we were founded eight years ago. We have bid on fossil fuel plants, gas fired oil fired, coal fired; every one of them; there’s plenty of public record that shows that we have typically delivered an average 20% tariff difference by adopting this approach.

By the way, just a few days ago we submitted the first utility scale renewables IPP tender in Saudi Arabia which was a 100 MW photovoltaic plant for the city of Mecca. We delivered 12 cents per kilowatt hour tariff. There were only two bids - from us and the renewable energy arm of EDF. They were at approximately twice our tariff.

And these tariffs are safe for you?

Well everybody is amazed and very happy that we have been able to do a 19 cents per kilowatt hour tariff in Morocco but I need to collect these 19 cents per kWh every year for the next 20 years in order to make ends meet on our budget.

For us to recover all our investment we actually need every dollar to be paid back to us over the twenty years.

However - the reality we need to deal with is that over the next decade (and renewables is the best example) as technology develops, it becomes more efficient, plant costs come down, tariff for those new plants will come down.

So the tariff those new plants will be seeking for CSP at that future time will be substantially lower than our 19 cents. Say - 11 cents or 12 cents - whatever.

So there we are at ACWA Power, sitting there with the 19 cents which we must still collect for the remainder of the contract to keep us whole. But those who don't understand PPAs won't recognise that a decade earlier we already spent the money on what was then the most competitive plant of the time.

They'll say 'hey, why are you still paying ACWA Power this crazy tariff with all this new capacity available at half the price?' and even the most honourable government or off-taker can then only do the sensible thing and see if they can convince the seller to reduce the tariff. If the PPA gets terminated early, or if the customer decides early on not to pay us, we'd enforce our contractual rights, but inevitably end up losing significant sums of money.

So regardless of the robustness of the off-taker, or the contract that we signed - our belief is that true sustainability of that tariff is being as competitive as possible for ten to twenty years. So, the best way for us to avoid getting into that situation, is to be as low as possible from day one.

When will your CSP project in Morocco break ground?

We are working to sign the financing agreements in a matter of weeks. By then we also expect to issue a limited notice to proceed to the EPC contractor who'll complete engineering and mobilisation to site, while we'll complete all the necessary conditions to begin drawing funds via the financing documents. We expect to break ground in May or June.

What plans - that we don’t know about yet - does ACWA Power have for CSP in the MENA region?

We will bid every credible project that comes up. Other than Saudi Arabia we don’t see many CSP projects coming up in the GCC region on an IPP [Independent Power Producer] basis. Maybe in Abu Dhabi for example, at Masdar City, they could come out with more CSP beyond Shams 1. Kuwait may come up with something, a limited amount of CSP, 50 or 100 MW. We expect to see CSP in time in the region. Jordan is a compelling case, but it takes quite a lot of time to move forward.

So for us, the bulk of MENA renewables will be between Saudi Arabia and Morocco.

There’s a lot of space to grow, in our view, as a company, beyond the Kingdom of Saudi Arabia. We are in the GCC, Turkey, Morocco and the southern horn of Africa: South Africa, Mozambique, Botswana, Namibia, and Jordan and Egypt. Beyond Saudi Arabia, we see the renewables footprint growth will be in South Africa and Morocco, where we already are. Morocco has a 2000 MW plan to develop over the next decade which they should have no problem achieving. We would like to have a meaningful position in that plan.

I expect to see some CSP coming up in the rest of the GCC region but not to the significant levels that is being planned in Saudi Arabia. The next tender is Ourazzate 2 in Morocco which we are working on right now, 300 MW in two packages, one is a 200 MW trough, and the other is a 100 MW tower.