Daily operations of Solana - four months down the line

While the challenges facing other CSP plants in America have made news, Solana has quietly plugged away in the background. In October 2013, the 280MW plant opened for business and began selling power to Arizona Public Service (APS). CSP Today takes a look at its initial months of operation. 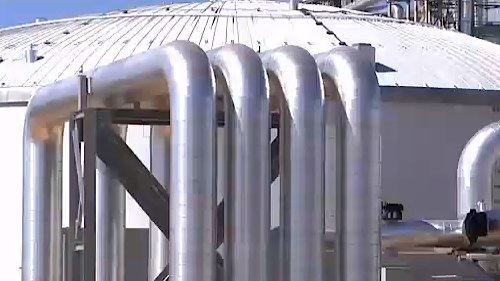 Solana has 6 hours' of storage

Solana is the first US CSP project with storage built-in from the start, and at 280MW gross, is the largest operating trough system in the world.

Arizona Public Service is buying the power from the plant which was developed by Spain’s Abengoa Solar.

"We are underestimating the value of storage, as well as grid security,” says Nancy LaPlaca, who was Policy Advisor to former Commissioner Paul Newman at the Arizona Corporation Commission (ACC), when they approved the contract. “If the grid goes down in Phoenix on a very hot day, we will see the value of local storage that doesn't depend on a long transmission line."

Brad Albert is the Resource Acquisition General Manager at APS, and he says his team is communicating throughout the day with Emiliano Garcia, General Manager of the plant and his operations staff, “dispatching and optimising it in real time, dealing with the operations of it.” He also was involved in the contract, so has been part of the project from the outset.

What was the criteria in selecting Solana?

Solana was attractive because it could meet early morning and late evening needs. When APS was evaluating the proposals, they were able to see estimates of power production for Solana (and the competing renewable projects) and not just for annual production, but very granular estimates on an hourly basis.

“When we were evaluating it - and this was five years ago when we entered the RFP process - and selected the Solana project, we were looking at hourly profiles, because we care greatly about how it comes at the hours that it does,” says Albert. “That was the level of detail that we put into our valuation of not just Solana but the other renewable resources that were bidding on our business.”

“What we care most about, what the critical periods are for us this time of year are the morning hours from before the sun comes up, and the evening hours right after the sun goes down”.

How is production comparing with estimates?

“It is just right on track with where you would expect it at this point in its lifecycle,” says Albert. “It’s just starting its production and it’s new in its life and everything, so it’s doing just fine. It is meeting our expectations so far.”

The plant began operating at the start of winter in October. Winter’s shorter days and the lower angle of the sun were factored into the overall annual estimate.

The impact of PV on grid integration

When Solana began the permitting process in 2009, Arizona had 900 rooftop arrays. By mid-2013, the number was 18,000. This has had two impacts on CSP, in competitiveness, and in peak loads.

“Abengoa did an enormous amount of work before the project was approved. In its day, it was ground breaking,” LaPlaca says. "They took on a difficult task early in the world of solar. No one knew that PV costs would drop so far so fast."

Every utility faces peak load as ratepayers come home from work. But in Arizona, this night effect is exacerbated by the amount of PV on its grid in the daytime, changing the load and impacting the wholesale power market in Arizona.
“In fact, the weakest wholesale power prices are now typically occurring during the middle part of the day and not even at night time,” explains Albert. “We are already starting to see and feel the impacts of solar PV penetration, and having a very difficult time across the middle part of the day in terms of keeping our operations stable and cost effective, there’s too much power out there.”

“We have on a good, clear day something on the order of anywhere from 400 to 500 megawatts of PV on the system, between what’s sitting out there on our customers’ rooftops and what we have as utility-scale PV on our system. This is against a load requirement in the middle of the day that is under 3,000 megawatts.”

As a result, the storage aspect has come to assume a greater importance than when the project began, to deal with the non-daytime load. Solana’s storage is also being used to meet early morning load.

Power after sunset - and before sunrise

Desert environments get quite cold at night in winter and the hour before sunrise is one of the winter peaks for APS. Because of the extremes of heat and cold, houses in Arizona are very well insulated and people use electricity for both heating and cooling, often with heat pumps. So the ability to store power overnight for use the next morning has become very useful.

Albert was very impressed with how little heat is lost overnight in the storage tanks. "The tanks are extremely well insulated,” he says. “I saw them being constructed during the installation. There’s very little heat loss out of those. I’m told that it has been less than a degree of temperature a day.”

One of the most valued aspects of the plant has been the dispatch-ability of its storage to meet changing needs on a daily basis. The PPA is flexible in meeting day-to-day needs. Albert says his team is able to place their order for production a day ahead, based on each day’s forecast of what their needs will be the next day, and operate the plant off energy stored overnight.

“That is what we did today, in fact,” he says. “We had them start up the plant probably about an hour to an hour and a half before sunrise this morning. It was into the mid to upper 40s here.” The plant could even operate entirely off stored power, according to Albert, but with one proviso.

“You’re only subject to two concerns,” he explains. “One is the obvious one, which is the amount of storage that you have. The Solana plant is equipped with 6 full power hours’ worth of storage: enough to be able to produce at 280 megawatts electric for 6 hours. That is the physical extent of the storage. There’s nothing that prevents you from keeping that energy bottled up in storage for multiple days if you wanted to.”

“But one of your more practical considerations could be what happens if you fill up the storage and leave it full. Now what if you can’t use all the solar energy from the solar field the next day?” To avoid spilling that energy when the storage is full, he says the plant is designed so you can store part of it and send the rest to the grid.

“We might have the plant running one turbine - so 140 megawatts during the day - and storing 140 megawatts that we can pull later in the evening to meet the load when our customers need the energy the most,” adds APS spokesperson Jenna Shaver, who has been impressed with the company culture.

APS has been working with Abengoa very closely to map out what is best for their customers and “we’ve just been seeing great results in terms of helping to meet the capacity at our system’s peak load.”