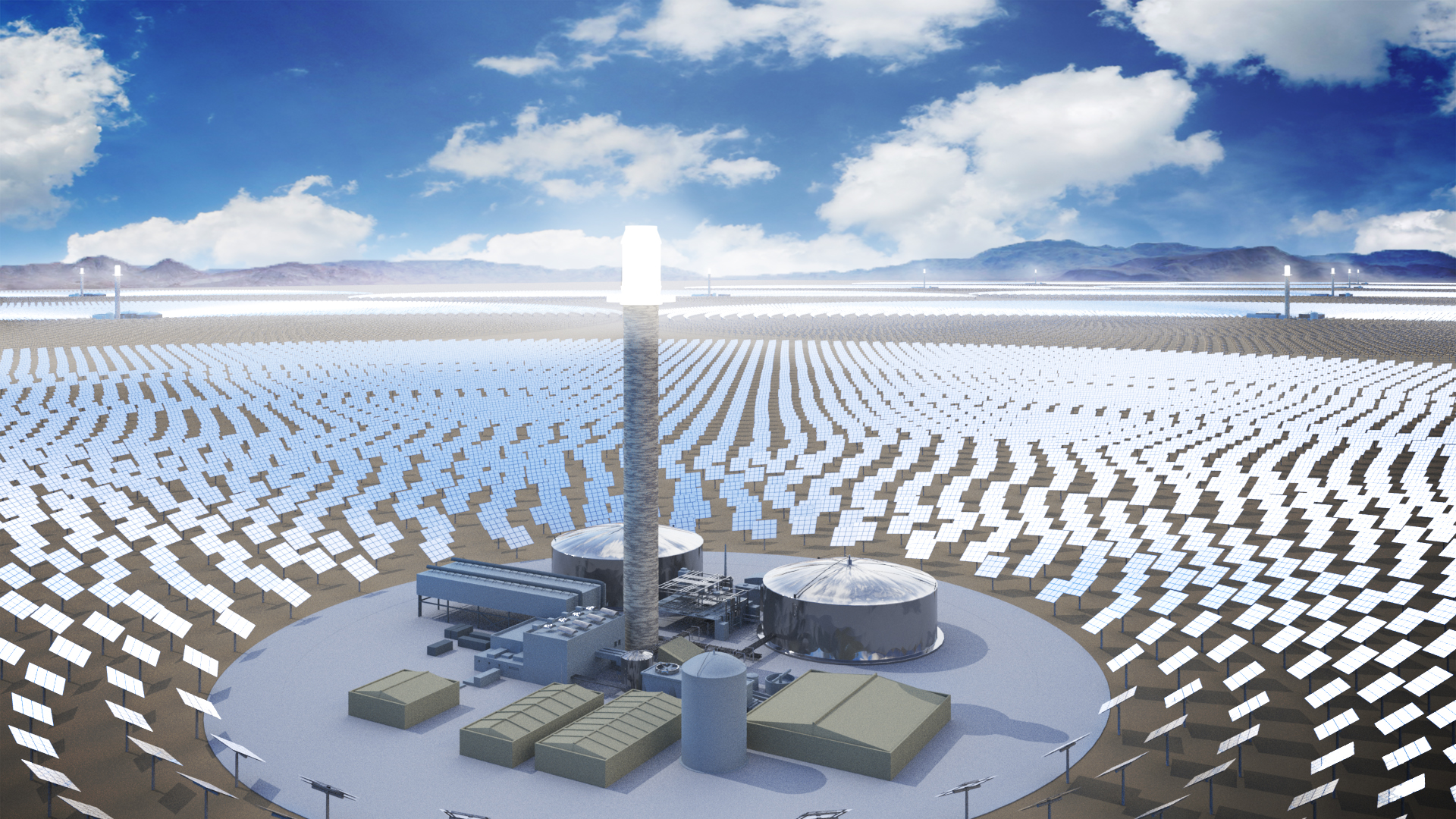 The Sandstone project would see up to 10 solar towers built in Nevada for a total capacity of 2 GW. (Image credit: SolarReserve)

The U.S. has seen only a handful of new CSP plants in recent years as falling technology costs have led to a surge in wind and solar PV capacity and CSP plants have struggled to compete on a cost per MWh basis.

California's SolarReserve has continued to seek U.S. opportunities and last month the company announced plans to build up to 2 GW of new CSP tower capacity in the state of Nevada.

The $5 billion Sandstone project would consist of up to 10 concentrated solar tower plants, each of capacity 150 MW-200 MW and equipped with molten salt for storage. Much of the power would be sent to California to cover high afternoon and evening power demand which cannot be met by PV and wind capacity.

“Our view is that California will be the dominating market in the U.S. for CSP,” Smith said.

“It’s really all about storage. California’s market will not be able to reach its 50% renewable energy target without substantial storage,” he said.

Saudi Aramco predicts the cost of PV with seven hours’ battery storage will fall below the cost of CSP plus storage by 2021, Tim Polega, executive head of Saudi Aramco's renewable energy, said at the MENASol 2016 conference in Dubai on May 25.

CSP developers must focus on performance improvements and supply chain savings from large-scale deployments to preserve the advantage for longer storage periods.

SolarReserve is proposing up to 10 hours of storage on the Sandstone towers.

The developer will use the experience from its 110 MW Crescent Dunes plant in Nevada, which has 10 hours of storage and can store 1,100 MWh per day. This is 30 times more storage capacity than the largest battery installed in California, the 32 MWh Tehachapi plant.

The above graph shows typical daily output from the Crescent Dunes plant.
The yellow is Direct Normal Irradiance (DNI), the red is thermal energy that the power plant collects in molten salt, and the green is power delivery.
Even when sunlight is intermittent, the plant can provide steady power from the morning well into the night.

The entire Sandstone solar complex could supply 3% of California’s power needs and generate power until 11 or 12 PM, Smith said. As in many developed countries, demand rises sharply at around 5-7 pm while PV output declines.

“To address the peak times of California, you’re looking at minimum of six hours of storage. So our view is that 6 to 10 hours of storage is the sweet spot for CSP technology in the U.S.,” Smith noted.

SolarReserve has shortlisted two sites in Nye County, Nevada and will announce the site in the next six to nine months. The project is expected to be located on land managed by the U.S. Bureau of Land Management (BLM).

“The rule’s competitive leasing provisions will help renewable energy development flourish on the 700,000 acres of public lands that have been identified in Arizona, California, Colorado, Nevada, New Mexico and Utah,” BLM said in a statement.

Competitive bids will replace the first-come, first served application process used to date and the regulation will ensure transparency and predictability in rents and fees by giving developers the option of selecting fixed rate adjustments instead of market-based adjustments, BLM said.

Fees have been updated in line with market conditions “which will bring down near-term costs for solar projects,” it said.

Smith said the BLM’s latest measures are encouraging for the CSP industry.

“Our expectation is that it all results in a more expedited process for permitting,” he said.