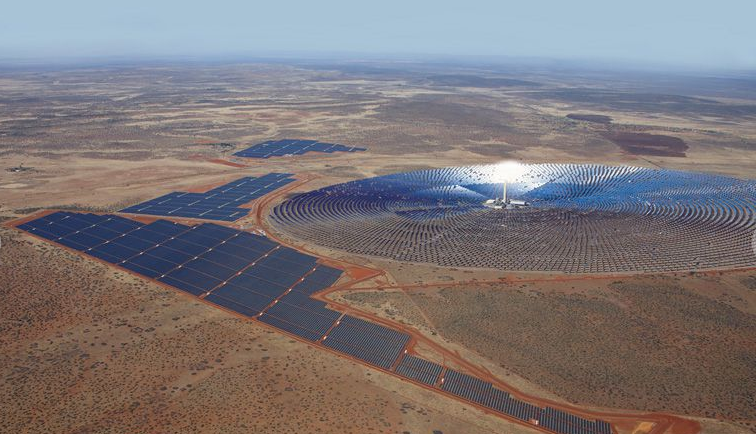 Global CSP capacity hit 4.95 GW at the end of 2017, according to the International Renewable Energy Agency’s annual report on global renewables capacity.

The 100 MW Xina plant in Pofadder, South Africa was the only CSP plant to begin commercial operations in 2017, marking the slowest year for the industry since at least 2008, when IRENA began keeping records.

Global CSP capacity is expected to grow significantly in the coming years, with China alone planning to add 5 GW by 2020. Several projects are on schedule to become operational this year, including the 200 MW Noor 2 and 150 MW Noor 3 projects in Morocco, and the 100 MW Shouhang Dunhuang project in China. There are 16 pilot plants under construction or in planning or development in China (after four were recently shelved from the original list of 20). Outside China, several projects are either under construction or about to begin construction, including the 150 MW Aurora project in Australia, and the 700 MW fourth phase of Dubai’s Mohammed bin Rashid Al Maktoum Solar Park. 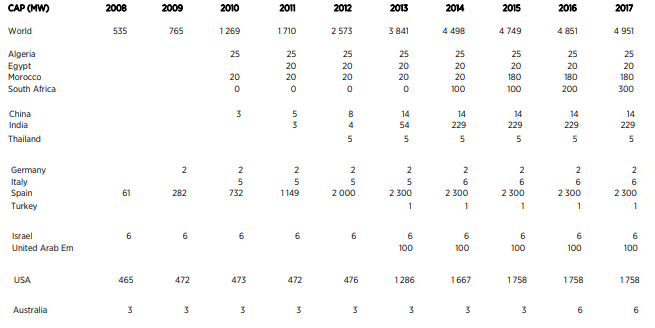 Spain and the U.S. account for more than 80% of global CSP capacity (Source: IRENA)

South African energy minister Jeff Radebe confirmed the news on Twitter. He announced that the South African government had signed agreements for 27 projects procured under the Renewable Energy Independent Power Producer Procurement Program (REIPPPP), one of which is Redstone.

In 2015, South Africa awarded a consortium led by SolarReserve and ACWA Power the Redstone project, at a tariff of $124/MWh. But in 2016, state utility Eskom – which had been facing ongoing financial difficulties – announced that it was postponing signing of the PPA.

The PPA is for 20 years, and it will see Redstone deliver clean electricity to more than 200,000 South African homes for up to 17 hours each day, including during peak demand. The plant will store 1,200 MWh of energy daily. It will be located near Postmasburg in the Northern Cape Province, adjacent to the 75 MW Lesedi and 96 MW Jasper PV plants that were also developed by SolarReserve.

South Africa has strict requirements in regards to foreign investors and their use of local content. During the Redstone construction period, more than 43% of capital costs will be spent on South African content. The Black Economic Empowerment program will have a 26% share in the project, and more than 700 million rand ($58 million) will be spent on small- and medium-size enterprise and socio-economic projects over the 20-year period of the PPA.

Denmark has put itself on the CSP map, inaugurating a combined heat and power (CHP) plant with a biomass boiler and 16.6 MW of concentrated solar power capacity.

The system is the first CHP plant of any type in Denmark, and it is the first in the world to integrate CSP and biomass with an Organic Rankine Cycle (ORC). The solar-thermal system based on CSP technology has been producing heat since the end of 2016, but with the ORC and biomass units now online, it is also ready to contribute to the electricity grid.

The CSP technology consists of 40 rows of 125m parabolic troughs. Aalborg CSP developed the 26,929m2 CSP portion of the project, and the entire project was support by the Danish Government’s Energy Technology Development and Demonstration Programme.

Aalborg CSP has long been pushing the potential for CSP to be used throughout Europe. Although CSP is known for its used in sunny desert areas like Spain, the western US, and the Middle East and North Africa, Aalborg CSP says it has potential in northern Europe when integrated with other technologies.

According to Aalborg CSP, markets with well-established district heating infrastructure or an existing base of ORC plants - such as Germany, Austria and Italy - can leverage the flexibility of CSP for combined heat and power generation. It says that while the prices of different types of fuel fluctuate, concentrated solar energy proves to be a stable and efficient renewable alternative in Europe.