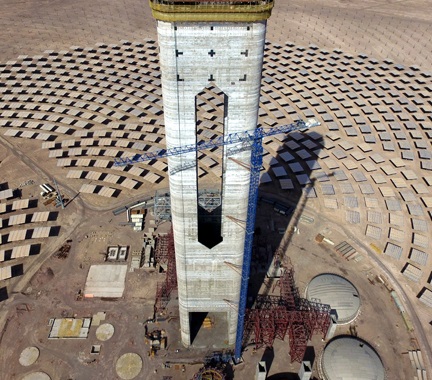 The Cerro Domindor plant is currently 85% complete and will include 17.5 hours of thermal energy storage capacity. (Older photo).

A fire broke out Tuesday at the 110 MW Cerro Dominador CSP project, currently under construction in Chile's Atacama desert, the developer said on Twitter.

The fire was spotted at 20:00 local time Tuesday at the top of the 250-meter receiver tower, development company Cerro Dominador, a subsidiary of EIG Global Energy Partners, said.

By Wednesday, local firefighters had brought the fire under control, it said. The fire had caused some material damage, but no major damage to infrastructure, the company said. No workers were injured, it said.

The first utility-scale CSP plant in Latin America, Cerro Dominador is being built by an EPC consortium owned by Acciona (51%) and technology supplier Abengoa (49%) under a turnkey contract.

Located on a 146-hectare site, the plant includes 10,600 heliostats that direct the solar radiation to a receiver located at the top of the tower. The plant features a record 17.5 hours of molten salt thermal energy storage capacity and will be joined to an operational 100 MW PV plant at a total cost of $1.3 billion.

The combined facility will be capable of supplying power 24 hours a day, mainly to serve mining facilities.

In July 2018, Acciona and Abengoa resumed construction of the plant following a two-year stoppage. The project was halted in 2016 when Abengoa, originally co-owner of the project and EPC supplier, underwent financial restructuring and transferred its stake to EIG.

Last month, Cerro Dominador Director Francisco Vizcaino told New Energy Update the project was on track to start commissioning activities by the end of the year and achieve commercial operations by May 2020.

Construction is 85% complete and work will resume "as soon as possible," the company said Wednesday.

The Cerro Dominador group has been assessing other sites in Chile for future CSP projects.

US to provide $30 million to 13 CSP research projects

The U.S. Department of Energy (DOE) is to provide $30 million to 13 CSP research and development (R&D) projects in its latest round of solar funding, the DOE announced November 6. In total, the DOE will provide $128 million to 75 solar research projects that help to cut costs or improve grid reliability.

The CSP research projects will cover areas such as new materials, systems and manufacturing solutions, as well as automated CSP collector fields.

The projects will help the U.S. achieve the DOE's CSP generation cost target of $50/MWh by 2030 for CSP with a minimum 12 hours of thermal energy storage, the department said.

The largest award-- some $4.4 million-- will go to Echogen Power Systems, to develop advanced compressors for CO2-based power cycles and energy storage systems. Echogen will provide an additional $1.1 million to the project.

"Conventional systems have multiple shafts but lower mechanical efficiency and higher costs. The team will build and test a prototype at the University of Notre Dame’s test facility," it said.