Overcoming the reservations of the finance industry will be key to China achieving its ambitious goal of 5 GW of power generation from concentrated solar power by 2020, expert speakers said at CSP Seville 2017. 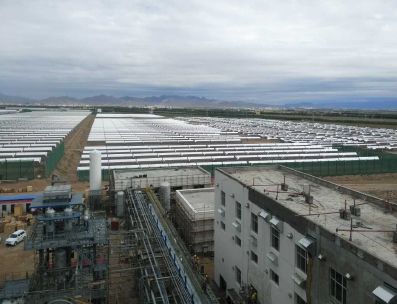 Several China pilot projects use parabolic troughs, including this one in the western province of Qinghai (Image credit: Cayetano Hernandez)

Beijing set the target last year as part of its latest five-year plan. The 5 GW figure is equal to the current total capacity of global CSP installations. But the speakers on a panel discussion on the Chinese CSP sector predicted the goal would not be reached as early as hoped.

Last November, Chinese authorities approved 20 CSP demonstration projects with a combined capacity of 1.35 GW, most of them located in the north and west of the country where direct natural irradiance (DNI) typically reaches 1,800-2,000 kWH/m2/year. Central tower technology accounts for roughly 50% of the total capacity of these projects, with parabolic trough contributing around 35% and linear fresnel 15%.

The banks don’t yet have confidence in the companies that are going to develop the projects, Hernandez said. Given the current situation, he said a figure of around 1 GW of electricity generation from CSP could realistically be expected in the next two years.

Wind and solar energy account for just 4% and 1% respectively of China’s total installed power capacity, because the “Chinese electricity market isn’t completely prepared for this type of energy”, Tao said.

“It’s still difficult for the Chinese electricity grid to receive the kind of energy which needs to quickly connect or disconnect to the power plant. So it’s still a difficult point, to be able to extend the use of renewable energy in China.”

Agreeing with Hernandez on financing issues, Tao said banks and investors are finding it very difficult to trust plants with unproven technologies such as parabolic trough with molten salt receiver.

Testing the waters with variety of projects

Hernandez noted that the Chinese government very deliberately planned for the demonstration projects to be spread out over different provinces and using different technologies. He commended Beijing for choosing a variety of projects, but said they would not achieve the necessary economies of scale with the 50 MW to 150 MW projects included in the first batch of demonstration projects.

The logical conclusion is that although the Chinese are very interested in CSP, they are not willing to risk bigger plants even if this would make sense from an economies-of-scale point of view, Ralf Wiesenberg, Managing Director of Spain’s AF Aries Energy, said.

DNI can reach close to and in excess of 2,000 kWH/m2/year in the deserts of western China (Image credit: NREL)

AF Aries is consulting on the Delingha project, and Wiesenberg described some of the issues facing his team in the remote location in the western province of Qinghai. Delingha is located at 3,100m above sea level, and has a DNI level of more than 2,150 kWH/m2/year. Weisenberg and his team were aware that temperatures can reach as low as minus 30 celcius in winter, but one thing they did not give thought to was who else operates in the region.

“The majority of China’s nuclear warheads are in this area, making it a restricted area,” he said.

Non-Chinese are generally prohibited from the area, and even those who are allowed to visit the site are subject to restrictions. “Last year there was a manoeuvre, and we had to stop all site work for three or four months,” Wiesenberg said. “You can imagine that once you are there and you learn what is going on, it’s not so easy. You have to be really prepared with local people and have a lot of information in order to make a profitable project.”

Tao and Weisenberg both emphasized the important of learning lessons from what Tao called a “very critical period” for the Chinese CSP market.

China is in need of foreign expertise for this first phase of projects, and once the plants have been completed, outside support will be needed for commissioning, operation and maintenance, Tao said. He predicted Beijing would announce a second tender for demonstration plants in 2018 in an attempt to reach the 5 GW objective by 2020. And he said the lessons learned from the first batch of projects would be all important to achieving quicker construction times in the next phase.

At Delingha, Spain’s Ingeteam, tasked with the initial engineering, has outsourced work to three separate contractors with fulfilling various roles. Therefore, Weisenberg said, AF Aries has to deal with four separate parties on the ground in Qinghai, in addition to having to set up an engineering team at its Spanish headquarters and its own local engineering and project management teams at the site. Nevertheless, he said he expects the plant will go online next year with only minor delays.

“EPC contractors from China are already on the world market offering their services, doing projects, so it’s important to know how to work with them on an international level. That’s what we’ve learned and that is good for all international companies involved in China."