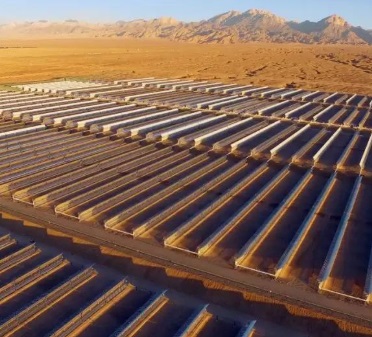 The Delingha plant is located at 3,100 meters above sea level in Qinghai, north-western China. The site has a direct normal irradiance (DNI) level of more than 2,150 kWh/m2/year.

The plant uses parabolic trough and molten salt storage technology and was connected to the grid in June.

The new technical standards will include the "latest design concepts, requirements and technical level" for solar tower plants and they will play an important “guiding role” in China's first batch of CSP plants, CEEC said.

The dual-technology DEWA CSP project, awarded by the Dubai Electricity and Water Authority (DEWA) in September 2017, sets a new industry record for size and cost-efficiency. The project was awarded at a tariff price of $73/MWh and includes up to 15 hours of energy storage capacity.

This baseline scenario includes 1.9 GW of new capacity in China, 1 GW of new projects in Morocco and South Africa, 1 GW in the Middle East and the remainder in Australia and Chile.

Under an accelerated growth scenario with faster development of announced projects, CSP installations could rise by a further 2.6 GW over the next five years, the IEA said.

Spain and the U.S., the two countries with the most installed CSP capacity, are not forecast to install any new capacity in the next five years.

By 2023, China is expected to overtake the U.S. to host the second largest installed CSP base, behind Spain, the IEA said.

Infunde Development has invited expressions of interest for consultants to perform a grid impact study for a medium-sized CSP plant in Indonesia.

Infunde is co-developing the project with a local partner, the company announced October 11. No further project details were given.

Consultants have until November 16 to express their interest in the contract. The Request for Proposal (RfP) and Terms of Reference will be sent to shortlisted consultants after a review of their technical qualification and work experience.