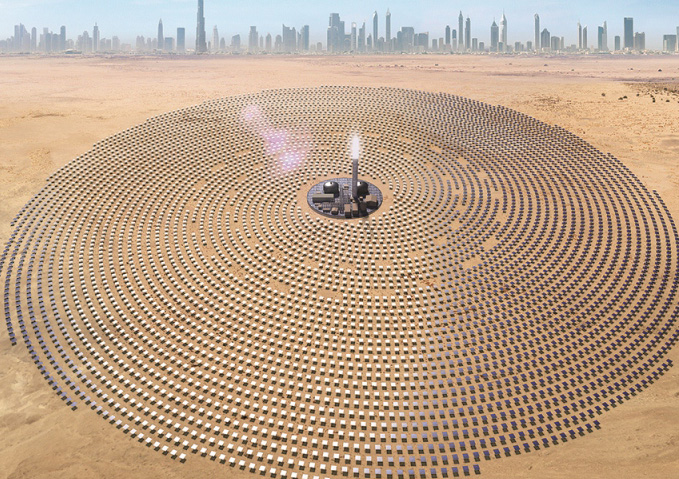 Shanghai Electric will leverage its supply chain capabilities to install the 700 MW plant in Dubai. The plant will use parabolic trough and tower technology. (Image credit: DEWA.)

The 700 MW dual-technology CSP project, awarded by the Dubai Electricity and Water Authority (DEWA) in September 2017, sets a new industry record for size and cost-efficiency.

The project will require 14.2 Billion AED ($3.9 billion) in investment and will consist of three 200 MW parabolic trough systems and a 100 MW central tower plant. The project was awarded at a tariff price of $73/MWh and includes up to 15 hours of energy storage capacity.

Spain’s Abengoa and U.S. developer BrightSource are the respective technology providers for the parabolic trough and central tower plants, bringing decades of CSP industry experience to the project.

Project documents, including the power purchase agreement (PPA) with DEWA and EPC contracts, have now been signed and talks with financial lenders are at a "very advanced stage," Meriem Bellizim, ACWA Power’s project manager for the DEWA 700 MW CSP project, told the conference on April 24.

"Financial close will be around the end of July, maybe the beginning of August," she said.

A key driver of the low tariff is a 35-year PPA provided by DEWA, much longer than the typical 20 to 25 years offered for CSP projects to date, which spreads the initial investment across a longer period and reduces the annual cost of capital.

Economies of scale and purchasing power will also play a major role. The construction of three 200 MW parabolic trough systems will allow manufacturers to introduce economies of series.

Shanghai Electric's experience as a plant supplier as well as an EPC contractor will allow it to drive for efficiencies in the supply chain, Bellizim said.

Shanghai Electric is one of China's top five power generators. Owned by China Power Investment Corporation, Shanghai Electric has a total installed capacity of 107 GW, including 5 GW of solar power and 10 GW of wind. The company is active in 35 countries.

The JV between Shanghai Electric and BrightSource includes the construction of a 135 MW tower with molten salt storage at the Huanghe Qinghai Delingha project in Qinghai province, selected under China's 1.35 GW CSP Commercial Demonstration Pilot Program. The partners plan to build multiple 135 MW towers at the site.

Shanghai Electric has worked with BrightSource to optimize the installation of central tower solar fields, including mirrors, molten salt receivers, and control systems, and these learnings can be applied to the Dubai project, Deyuan said.

"The combination between BrightSource and Shanghai Electric could benefit the integrated solution- especially for the solar field," he said.

ACWA Power has issued a limited notice to proceed (LNTP), allowing Shanghai Electric to move forward with supply optimization ahead of a full NTP later this year.

"All kinds of experience and lessons learned will be helpful for us to understand the challenges," he said.

For the parabolic troughs plant, Shanghai Electric is collaborating with Abengoa to find innovative solutions to best integrate the solar field and power block, Deyuan said.

Maximizing overall plant performance is a priority for Shanghai Electric, he said.

"We will mix best practice from the past experience...And continue to optimize the solutions. We found there are a lot of spaces to be improved.”

Shanghai Electric will look to optimize all aspects of the supply chain, including raw materials costs, Deyuan said.

"We have a huge demand of quantity for the materials and equipment...We would like to have open discussions...for collaboration with participators for this project, to find the best solutions," he said.

Supply chain gains for the DEWA project should help support global CSP growth and the buildout of a “very strong supply chain” in the Middle East, Deyuan said. Other projects up for tender in the Middle East and North Africa (MENA) region include Morocco's 800 MW Midelt project hybrid PV-CSP project, for which contracts are expected to be allocated in 2018.

China’s Demonstration Pilot CSP program will support the growth of a domestic CSP industry, and installation and technology experience gained from abroad will allow China to diversify its technology base, he said.

"This will give us more chances to achieve technology improvements," Deyuan said.

Increasing efficiency of heat transfer fluids, improvements in receivers and collectors, and automation of manufacturing and operations and maintenance activities should all drive down costs, Geyer said.

"There is still lots of room for improvement for automating the O&M," he noted.

A CSP plant of capacity 100 MW-150 MW might typically have around 50 to 70 operational staff, and this number could be significantly reduced with automation, Geyer said.

"There is much less automation in these plants than we have in....combined cycle [gas] or coal plants," he said.