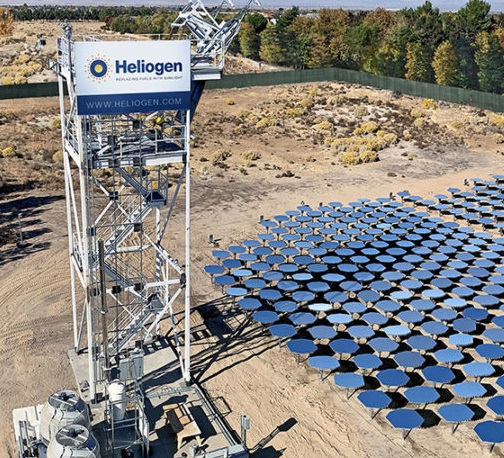 A number of research groups are raising the temperature limits of CSP plants to increase system efficiency and tap into the industrial heat market. In one example, the German Aerospace Centre (DLR) is developing a centrifugal CSP receiver which has already achieved particle temperatures of 965°C at the receiver outlet.

California's Heliogen eventually aims to reach temperatures of up to 1,500°C, allowing it to split carbon dioxide and water to make fuels such as hydrogen or synthesis gas (syngas).

Heliogen is working with Parsons Corporation, a multi-industry engineering group with over a decade of experience in developing solar thermal projects.

Both the plants feature nine hours of storage capacity and are located near Terraform's other CSP assets. The plants have around 19 years of remaining regulatory life under the Spanish market framework.

In 2018, Terraform acquired five 50 MW CSP plants in Spain through a takeover of Spain’s Saeta Yield group. The Extresol 1, Extresol 2, Extresol 3, and Casablanca plants are located in Extremadura, south-west Spain while the Manchasol 2 plant is located in the central Castilla-La Mancha region.

Terraform's latest transaction is scheduled to close in Q1 2020 and is expected to generate returns on equity beyond the company's target range of 9%-11%, it said.

Credit Suisse Energy Infrastructure Partners recently purchased a 49% stake in 250 MW of Spanish CSP capacity from ContourGlobal at a price of 134 million euros. The five 50 MW plants are situated in south-west Spain and came online between 2009 and 2012.

ContourGlobal, a UK-based power plant investment group, purchased the plants from Spain's Acciona last year. The price paid by Credit Suisse was almost double the net investment made by ContourGlobal.

Spain's CSP plants generated a record output of 2.8 TWh in the first half of 2019, some 19.3% higher than the historical average and accounting for 2.4% of national power generation, according to data published by grid operator Red Electrica.

Terraform operates over 4 GW of global renewable energy capacity, including 2.8 GW in US, 146 MW in Canada, 948 MW in Europe and 197 MW in other regions.