Adapt or Die: Real-World Evidence Across the Lifecycle

The regulator’s view of real-world evidence 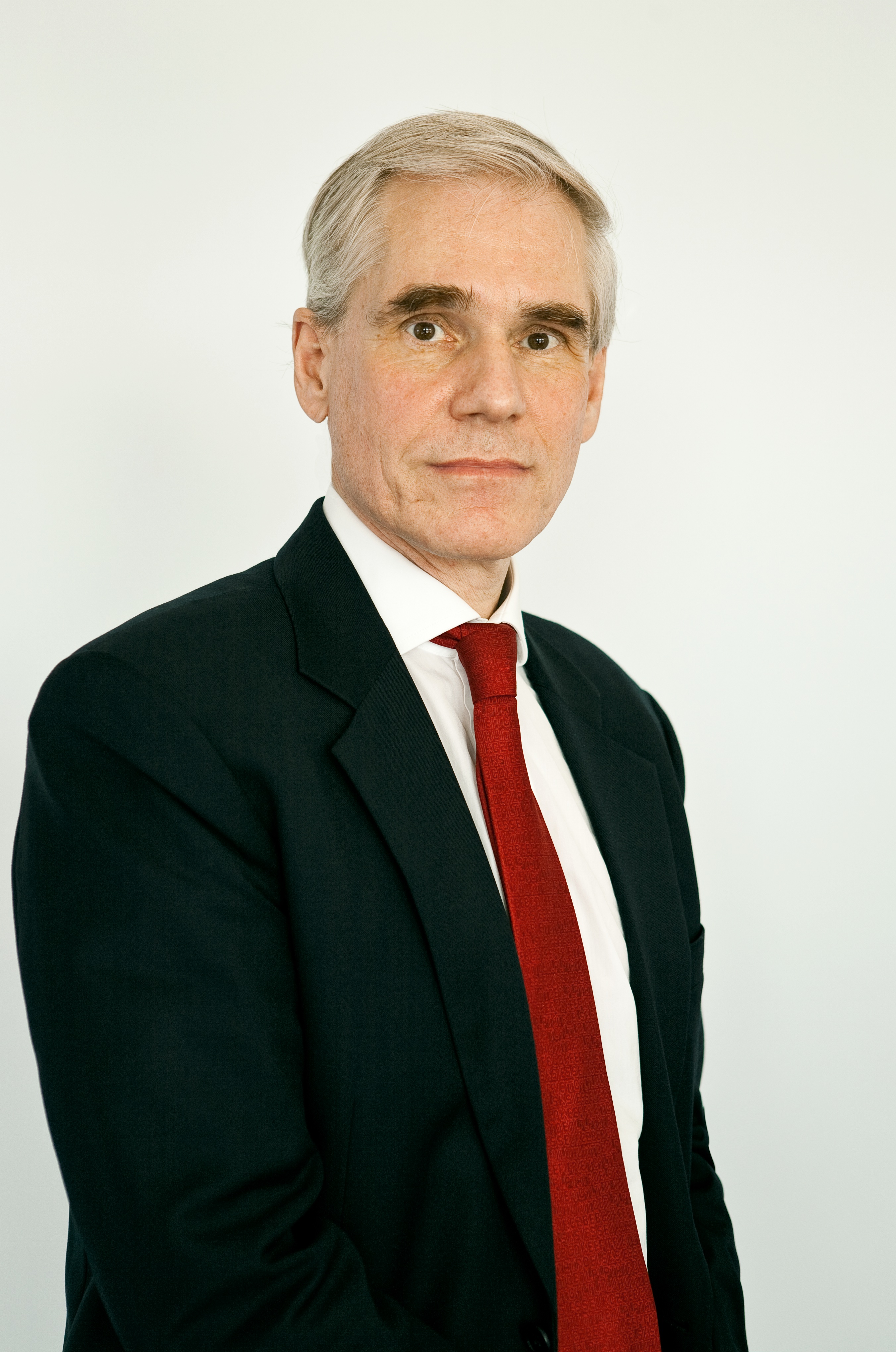 As Senior Medical Officer at the European Medicines Agency (EMA), Dr Hans-Georg Eichler has the unenviable double task of being a guardian of public safety and an enabler of innovation. As such, he is at the forefront of industry-transforming trends around the gathering and interpretation of real-world evidence. “There will always be far more questions in a conventional drug development program with randomized control trials than we can answer,” he says. “There are questions relating to different patient subsets, different comparators, different outcomes etc. but now there’s an opportunity to answer these questions using real-world evidence and we want to ensure we’re using this opportunity appropriately to expand access.”

Reconciling timely patient access to medicine with the need for robust evidence and comprehensive information on drug safety and efficacy was a conundrum that gave rise to the EMA’s adaptive pathways program, initially set up in 2014.

The concept applies to treatments in areas of high unmet medical need where it is difficult to collect data via traditional routes and where large clinical trials are either impractical (eg, rare disease populations) or unethical. The intention is to allow drugs to be licensed in a small patient population first, with further studies conducted later to determine whether that use should be extended or restricted.

“For patients, time is of the essence, and it matters if a drug comes to market in 2016 instead of 2018. Yet, as for any medicine, a marketing authorization will only be granted if the balance of benefits and risks for the defined patient population is found to be positive. This is followed by iterative phases of evidence gathering and progressive licensing adaptations, concerning both the authorized indication and the potential further therapeutic uses of the medicine, to expand its use to a wider patient population as more data become available. “The whole objective is to increase evidence in a staggered way, with continuous learning over the lifespan of a product,” says Eichler.

We wanted to ensure that we focused only on drugs that would move the needle for the patient. The key learning is that it’s possible to devise such a pathway to market and to knowledge generation. It’s also possible to bring in decision makers, HTA bodies and have meaningful interactions with patient groups.

However, he admits that there is a major stumbling block – the differing attitudes of regulators and HTA/payers. “There’s definitely a disconnect between regulatory and payer decisions,” he says. “We have to get all the decision makers around one table to synchronize the access decision. A key building block is that once a product is out, with limited but robust evidence, we have to ensure the product is used appropriately. There has to be some restriction on prescriber behavior; it can’t be a free-for-all because we want to grow the treatment-relevant population in a coherent way.” Dialogue between these stakeholders is essential to help determine which medicines could be appropriate for adaptive (iterative) development, to jointly agree a data generation plan to meet the needs of regulators and HTA bodies, and to ensure the use of the medicines is well monitored and managed.

During the pilot phase of the adaptive licensing pathways program, the EMA received 62 applications, 18 of which were selected for in-depth, face-to-face meetings along with other stakeholders. At the time of writing, six of these applications had progressed to receive formal parallel advice by EMA and HTA bodies and one to benefit from simple scientific advice. The majority of the proposals received were not considered suitable for adaptive pathways, and the companies were advised to pursue traditional development routes. 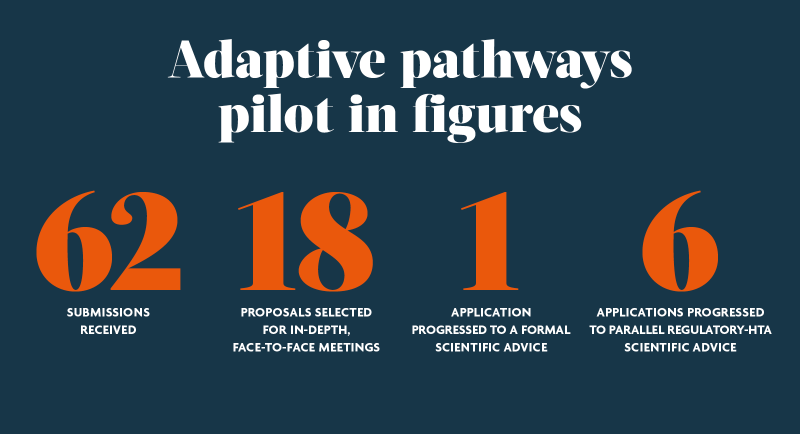 Ultimately, we chose a very small selection of the drugs that were submitted and many companies may have been disappointed,” says Eichler. “We wanted to ensure that we focused only on drugs that would move the needle for the patient. The key learning is that it’s possible to devise such a pathway to market and to knowledge generation. It’s also possible to bring in decision makers, HTA bodies and have meaningful interactions with patient groups. Patient representatives gave us insights into what was urgent for them and informed HTA bodies with their report.”

Most companies were very good at laying out development plans up to initial licensing, he says, but after that “the whole thing got a little vague. So we have to gently remind everyone that this is a lifespan approach and you have to be as careful in the early stages as the late stages – focus on the upstream and the downstream. We were underwhelmed with the industry, but we got there in the end, and we will be successful in devising a lifetime development plan in certain cases.”

Eichler’s advice to pharma is to act earlier. “If we had one wish, it would be for pharma to come to us for scientific advice on its RWE plans. For decades, we have advised companies on how to design RCT trials and we are now ready to give scientific advice on other types of studies, including observational studies, creating disease registries, etc. Some time ago, a company came to us with a product

for a rare disease and we looked at the protocol for the real-world study together, planning a registry. It took a couple of years to accumulate the information but, in the end, it was so useful that it allowed us to expand the indication. It was good from the patient and company point of view. It was a very positive and fruitful outcome.” 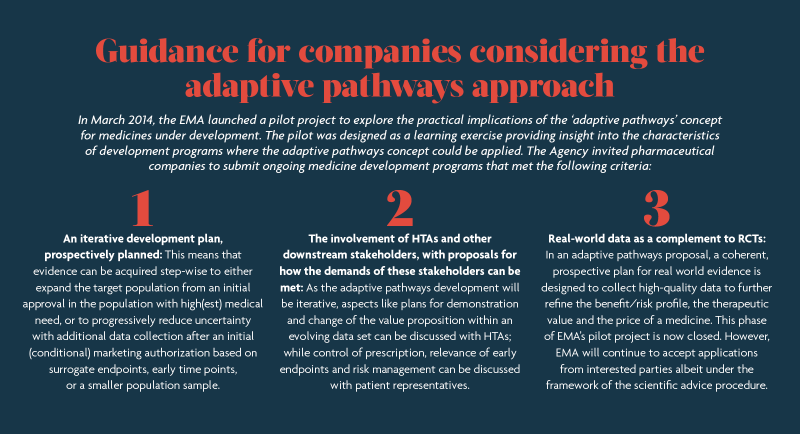 Assessing the value of a drug requires an understanding of its impact on current management in a practical, real-life setting, but, as the benefits of real-world data become more apparent so too do issues around appropriate collection and reliability. Eichler cautions calls for a balance between the real-world and clinical trial data. “We always said RWE will not replace RCT – it will supplement it. Do we hope RTC trials will become more representative? It’s a complex question; if you study a product in a large population indiscriminately, and if you do not ensure good adherence to drug treatment, you may lose a good product that works in some select patients but not in a large plurality of patients,” he says. You want to ensure you get the right patient population for the right trial, he adds. “Finding the right balance between those two extreme will always be a challenge and you will see various clean RCT in select populations but we will have to supplement that information with RWE.”