Confident people rise to the top but why do so many women lack the confidence gene and what can be done to encourage women to step forward and embrace senior leadership positions? 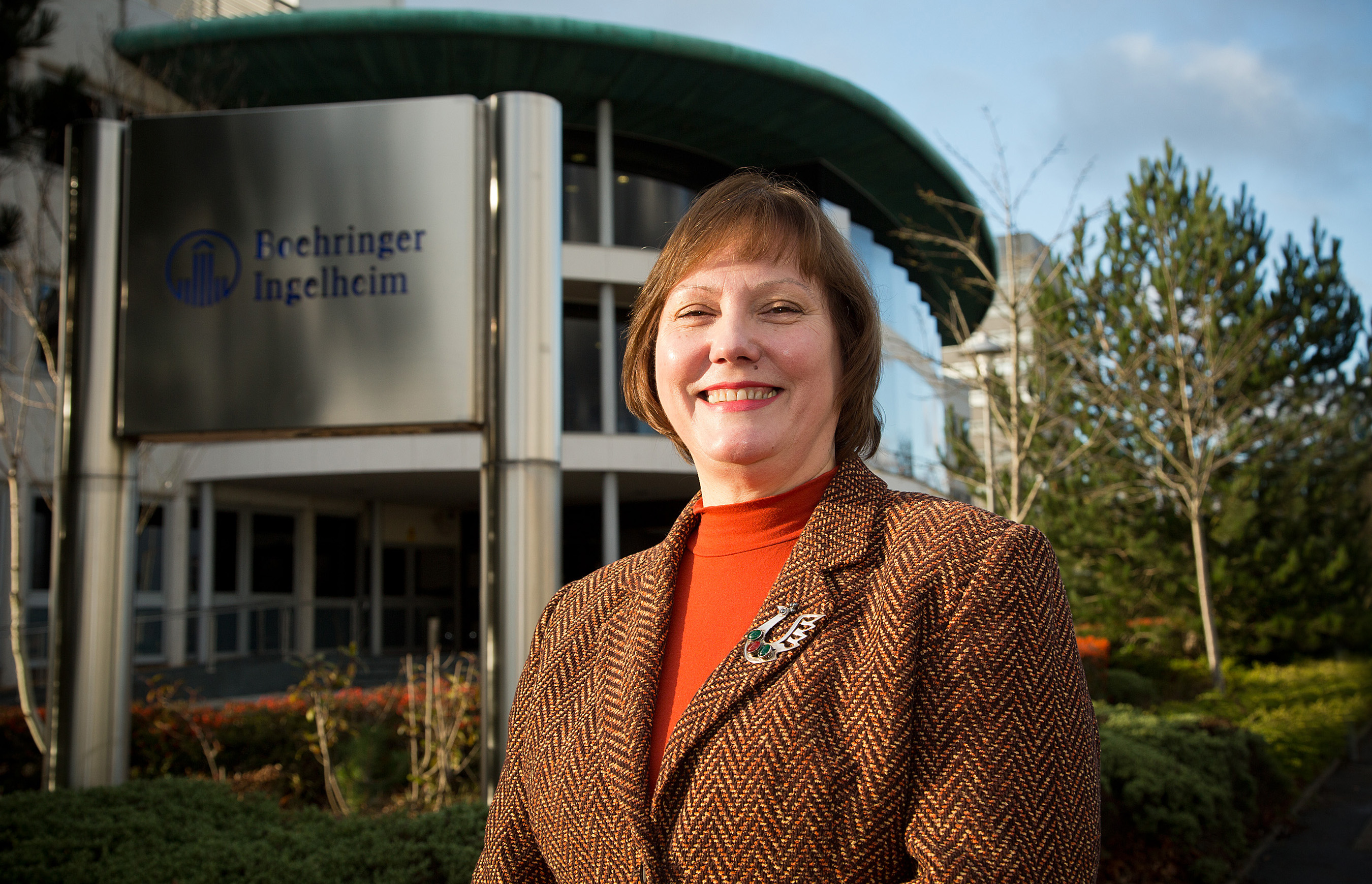 “When a man, imaging his future career, looks in the mirror, he sees a senator staring back. A woman would never be so presumptuous”, Marie C. Wilson, author of Closing the Leadership Gap.

Women now account for 18% of board members in Fortune 500 companies1. Whilst this may be a significant improvement on the 2011 figure of 16.4%, it is still a long way from parity. Companies continue to struggle with increasing gender diversity in leadership with a mere 24% of women occupying senior management roles globally.2 A nagging question remains: Why do so few women make it to the top corporate echelons? Are women holding themselves back?

According to one of pharma’s current female success stories, Zinta Krumins (now Managing Director, UK & Ireland, Boehringer Ingelheim), women need to step forward far more. “I think it’s crucial to be very open and clear about what you are interested in and the opportunities that you want to explore that could advance your career. You need to make that interest known, put your hand up and make a case for taking on that project or promotion. If you are told you can’t, you need to question what specifically is lacking capability-wise that prevents you from taking on new roles. Personally, my stint in Turkey was a great learning ground: unlike [the rest of] Europe which is much more consultative, Turkey is hierarchical and I had to find my voice and say, ‘yes I’ve heard your views, but now it’s time to do it this way’ and be decisive in my role.”

My parents raised me to assume nothing was impossible and from that point of view I never felt constrained, never felt I had to get permission and if I wanted to do something I put myself forward".

To underline the business imperative, she also says that pharma “needs huge input from diverse sources on how we run our businesses.  I am an advocate of diversity in the workplace”.

But the groundwork needs to be done early: “I was wondering recently how I ended up where I am. I think there is a very strong link with the way I was brought up; my parents raised me to assume nothing was impossible and from that point of view I never felt constrained, never felt I had to get permission and if I wanted to do something I put myself forward”.

In their book, The Confidence Code, authors Claire Shipman, the senior national correspondent for Good Morning America, and Katty Kay, the Washington correspondent for BBC World News America, set out to delve into the subject of women and their lack of confidence. The authors spelled out evidence that women are less self-assured than men, consider themselves less promotion-worthy, predict they'll do worse on tests and generally underestimate their abilities.

According to Shipman, “There's a great study that we've found by Hewlett-Packard that has since been replicated about promotions: women will apply for a promotion when they feel they have roughly 100% of the job qualifications; men will apply for promotions when they think they have 60%, and they figure they're just going to learn on the job. Women strive to be competent. We think, ‘If we just do a good job, somebody's going to notice and move us to the next level’, and what we’ve found is, and this is backed by research; no, people who are actually not just confident, but slightly overconfident, do better. They get more success, they're viewed as leaders of the pack, and their ideas carry more weight”.

“The Confidence Code” goes on to unveil that confidence is not a fixed state and can be developed and nurtured. The solution to the confidence gap? Less worrying and people pleasing and perfection and more action, risk-taking and fast failure.

Even after women get the senior positions, they doubt themselves and feel they are imposters. We do need to unlearn a lot of the fundamental beliefs about our abilities and a big part of that is confidence. The biggest drawback with confidence is it stops us from putting ourselves forward”.

In a recent article in the Guardian,Trang Chu, executive coach and founder of Tallgrass Leaders evaluates the role of unconscious bias – ingrained beliefs – including doubts about their abilities, that lead women to hold back and miss opportunities and stop them from reaching the top. “In my own experience, having worked in banking for over 20 years and for the latter part as Managing Director of Deutsche Bank and more recently working with women as an Executive Coach, I think women do hold themselves back because they lack confidence. Our aspirations too tend to reflect the current norm and, with relatively few women in key roles, women's unconscious beliefs about career advancement could be holding them back from reaching the top. Women are a lot harder on themselves than men and we won’t answer a question unless we are 100 per cent certain of the answer. Men don’t do that, they take a lot more risk and they’re more confident in their abilities. Even after women get the senior positions, they doubt themselves and feel they are imposters. We do need to unlearn a lot of the fundamental beliefs about our abilities and a big part of that is confidence. The biggest drawback with confidence is it stops us from putting ourselves forward”.

So it isn’t that women don’t have the ability to succeed, or are not interested in rising through the ranks to top positions; it’s that they don’t believe they can succeed, and that stops them from even trying. Women are so keen to get everything just right that they are terrified of getting something wrong. But if they don’t take risk and put their hands up, they’ll never reach the next level.

A substantial part of the confidence code is what psychologists term ‘volitional’: our choice. The good news is that lack of self-confidence does not however, equate to lack in leadership skills and potential and through support, coaching and a shift in thinking, confidence can be developed and acquired as with any other leadership competence area.

Here are 4 coaching tips from Trang Chu on how to build your confidence to progress to the next level in your career.

1)     Reflect on your own Limiting Self-Beliefs

“To begin a real process of change, women need to look at their own unconscious bias and move away from these potentially damaging beliefs. Assumptions are internal and they need to be understood before we can make any external changes. Bias comes in many forms, from assuming you need to take on more ‘masculine’ characteristics to succeed, to doubting your abilities and strengths. Look at what views you have in relation to self-advancement in your career and evaluate how these can be holding you back. We need to recognize our inner critic that whispers, ‘you don’t have enough experience to apply for that promotion’. The truth is, often we have more than enough experience and what we don’t know we can learn on the job. Underqualified and underprepared men don’t think twice about putting themselves forward. Overqualified and overprepared, too many women still hold back. Women feel confident only when they are perfect. Or practically perfect. Everything starts with awareness”.

“Self-trust is vital to having the courage to take on risk and new challenges. Know that we have the capabilities to move ourselves forward. It wasn’t luck or chance that got you this far. You have to trust your instincts and judgments and play to your strengths. Don’t second guess yourself or overanalyze. Confidence is all about having the self-belief that you can and will accomplish great things.  For the most part, the best person should get the job, regardless of gender, but you have to put yourself forward to even be considered and that requires confidence and trust in your own capabilities”.

“Highly qualified women are not breaking into leadership positions commensurate with their presence in the talent pool and the reason for many is that they are labouring under the misguided belief that if they work hard enough their achievements will speak for themselves and they will get promoted. That is not borne out by statistics. But in order to break through to the top, women need sponsors – influential leaders who are willing to advocate for their next key role and propel them to the next level. Women cannot passively wait for a chance to break through – they need to be strategic and seek out alliances and cultivate them early on in their careers. Talent is not enough and women rely too much on their capabilities speaking for them. Women-only networks need to get men involved as they will be all the more powerful with buy-in from men”.

4)    Take Risks and Consider All Opportunities

“Have you ever been asked to do something and turned it down because of a lack of confidence in your ability?  In order to break through the stereotypes that keep women from achieving positions of leadership, you need to believe in yourself. Accomplished, credentialed women will turn down opportunities because they feel they don’t have enough experience when in fact they often do – it comes down to confidence yet again. We often rely far too much on our credentials and fall back on our self-doubts - and we discount the importance of learning on the job. You don’t have to know everything – in fact you learn by doing and that involves taking risks. You stand to lose far more by being invisible and avoiding making mistakes. Women don’t put their hand up enough because of fear of failure. Taking risks builds resilience and self-confidence. Don’t hold back – the more you stretch yourself and succeed, the more confident you will feel which will empower you to strive towards a leadership position”.

There is a vast confidence gap that separates the sexes. It’s one of the chief reasons women don’t put themselves forward for senior positions and lack the crucial visibility to ensure they are “on the radar” of key decision makers. Awareness is the first step in changing behavior and results. While the fearful will agonize over decisions and always make the safe choice, the confident will take the information that they have and take action. That is the definition of leadership. If you want to conquer fear and grow in confidence – step forward.

What in your opinion is holding women back? Is it confidence? Have you experienced this in your own career? We’d love to hear your opinions.