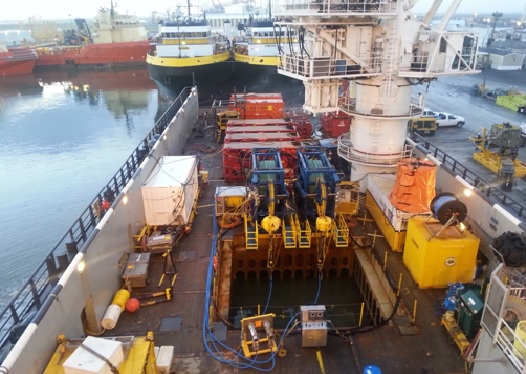 A well kill using resin requires, among other things: onboard tankage for mixing of brine; injection pumps; mixing blender for resin; and data cabin for well control (Image credit: Oceaneering)

Because there was a downhole obstruction, the operator of this particular field determined that it could not reliably carry out a lower temporary abandonment with cement, Mancini said.

“There wasn’t an easy way to go about circulation of cement as you would expect in a normal P&A [plugging and abandonment] where you’d be able to insert a plug pre- and post-cement job in the lower abandonment,” Mancini said about the job, which was completed two weeks before the Houston conference. “It was explored and it was elected that we would perform this squeeze using our hydraulic well-stimulation equipment for spotting and putting in place a resin plug in the completion.”

Cement could have separated or dehydrated under tight spaces in the restricted flow paths, whereas resin – which bonds to metal better than cement – would have had no such issues, Mancini explained.

Several speakers at the conference talked up resin’s prospects of replacing cement in well P&A. Debbie McIntosh, head of OTM Consulting’s subsurface and wells practice, predicted resin would be one of a number of groundbreaking technologies in P&A in the future. And Bruce Crager, Executive Vice President of Endeavor Management, described how a joint-industry project is evaluating the total costs of resins as a replacement for cements.

In this particular case, Oceaneering was able to perform the work at the end of a well-stimulation campaign for the same operator, thereby saving the operator further expenses associated with mobilizing and demobilizing Oceaneering’s multi-service vessel (MSV).

Oceaneering used dual coiled-tubing risers to deliver fluids from the waterline down to the mudline. It first injected brine into the well, and later squeezed the resin into the formation.

In this resin squeeze, as in any well stimulation, Oceaneering took control of the tree over to the MSV. This, Mancini noted, was not standard practice as recently as two years ago, when the regulator was still satisfied with the contractor maintaining a simple communications link with the host in order to control the tree.

Another requirement BSEE has brought in recently is to have a means of shutting in the well free from human intervention in the event of a black ship. Oceaneering has incorporated features into its system that give it the ability to disconnect its coiled-tubing risers, provide retention of the fluid within those risers, and ensure dual-barrier isolation of the tool, while also allowing it to command the tree to shut-in without human intervention, he noted.

When it came time for the actual well kill, Oceaneering installed flying leads into the well interface, and then performed a “shell test” against the barrier valves.

Once the tests were completed, it began injecting the fluids. It began with 250 barrels at 11 pounds per gallon (ppg) of brine, “just to clear out the hydrocarbons, as much as we could, out of the production tubing and into the near-bore formation.” It injected an additional 250 barrels at 12.7 ppg of brine, “basically to kill the well,” Mancini noted.

“We wanted to have it pressure-balanced, such that when we squeezed in the resin, we were going to have a static condition there until the resin had a chance to cure. We wanted to wait for it to cure, and we wanted to do it while it was not moving,” he explained.

Next came 35 barrels of resin, courtesy of partner CSI Technologies. And the job was completed with the injection of a third dose of 250 barrels of brine, again at 12.7 ppg, “to spot the resin into the formation”.

The final task was to check the resin was in the right place and to allow the temperature to drive the suitable reaction. Mancini concluded: “We had plenty of time to use conventional equipment to pump the resin into the reservoir, and then let nature or the natural temperature of the surroundings catalyze the reaction, or start the polymerization [setting] of the resin.”