The Wednesday Update including: colour and texture on Pinterest, Twitter and customer services and FOMO fuels social media addiction.

Brands that understand how social media is interfacing with their corporations are tapping into a propensity for social media users to feel that they are missing out if they don’t connect with their networks. A new study from MyLife.com highlights what it calls FOMO or Fear of Missing Out.

It seems that over half of social media users are afraid of missing out on news or status updates that could be of interest to them if they are away from their social media feeds for too long. As a modern addiction, some 26% of those surveyed would trade other habits like smoking to ensure they could connect to their social media networks when they want.

The survey also highlighted how social media habits manifest themselves. Over a quarter check their social media networks as soon as they awake in the morning, and over half state that they have considered taking a break from one of their networks, but only half of these respondents actually acted on this.

For brand owners this insight offers valuable data especially regarding how social media usage has changed since its inception. Today the valuable 18-34 age group is managing multiple social media networks and three email accounts. The touch points that brands now have are manifold. The key to successful campaigns will be choosing the right channel for each message. 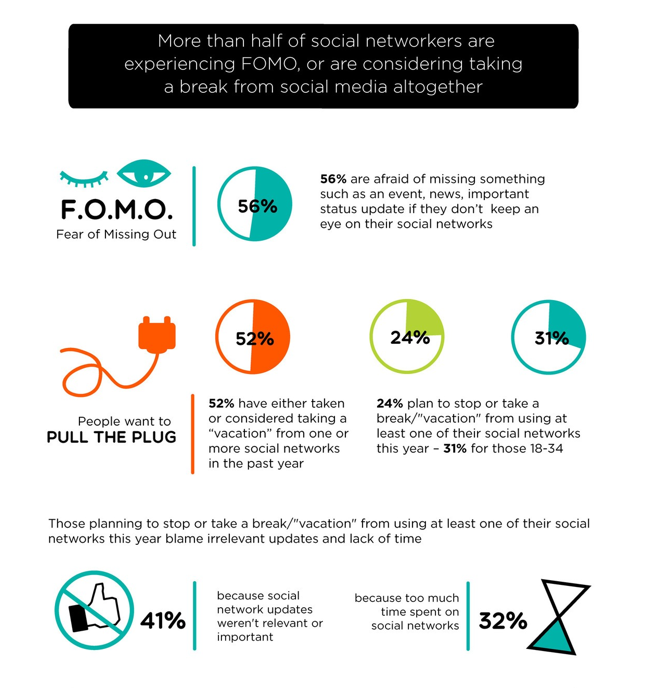 And brands know that a bad customer experience is now likely to be shouted across all social media networks, with corresponding issues for brand advocacy and sentiment. The infographic from Zendesk should be a warning to all businesses that don’t pay close attention to how social media is now influencing their customer services.

The research from Simply Measured is clearly a wake up call for all brands. Many corporations though, are reacting to the shift in how Twitter is being used as a customer services touch point and developing separate teams and channels within their businesses to handle these communications.

Beauty it seems is in the eye of the beholder at least when it comes to how attractive images are to potential customer on Pinterest. Research and an accompanying infographic from Curalate focused on 30 different characteristics of images and have come up with some fascinating and ultimately commercial results.

The top results from the study include: The most repinned images have multiple colours: Images with multiple dominant colours have 3.25 times more repins per image than images with a single dominant colour. Very light and very dark images are not repinned as often. In fact, the repinning rate for images of medium lightness is 20 times higher than for images that are mostly black, and eight times higher than images that are mostly white.

Also, images that contain less than 30% background (e.g. whitespace) are repinned the most. Repins drop off by 2X to 4X for images containing 40 percent or more of background area. With brand images without faces receive 23% more repins. Less than one fifth of images on Pinterest today have the presence of faces. Time to overhaul your brands Pinterest buttons?