The Dow Chemical Company is on track to complete its 1.5 mtpa ethylene cracker in Freeport, Texas in Q2 2017 as part of a wider production thrust to meet rising demand for speciality products in the Americas, Doug May, Dow’s business president for Olefins, Aromatics, & Alternatives, and Brian Ames, Dow’s senior vice president for Portfolio Development, told Petrochemical Update in an interview. 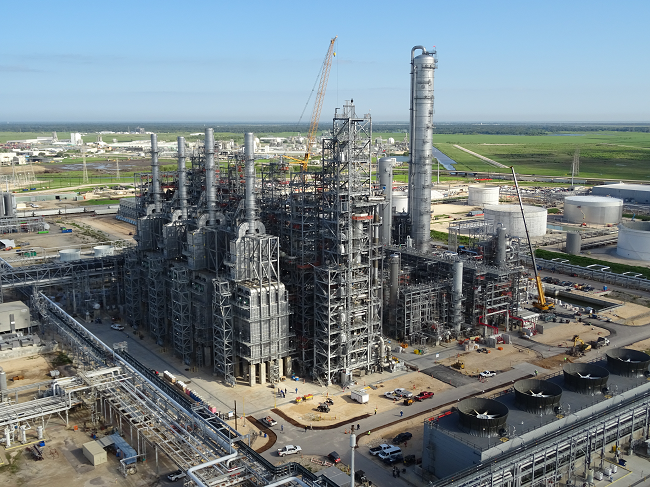 Dow seeks first-mover advantage by establishing a series of petrochemical projects on the US Gulf Coast to integrate its US operations with cost-advantaged feedstocks by 2017-2018 as some 10 million metric tons of new ethylene capacity is slated to start up in the US by decade’s end.

Ames said that construction on the world-scale cracker project is 32% complete and three of the derivative units associated with the ethylene plant are on schedule to start at the same time as the cracker. The fourth unit is slated to come online approximately 12 months after the commissioning of the ethylene plant.

The ethylene facility in Freeport will use both ethane and propane as feedstock. Dow is currently building enhanced ethylene distribution and new feedstock lines for delivering propane and ethane to Freeport, Ames said.

The ethylene produced at the Freeport cracker will be used both as a feedstock for existing units at the site and at other new and operational Dow facilities in Texas and Louisiana.

Wood Group Mustang is providing the engineering, field services and construction management for the project's pipelines while Fluor is performing engineering, procurement and construction for the Freeport ethylene production plant, as well as associated power, utilities and infrastructure upgrades. 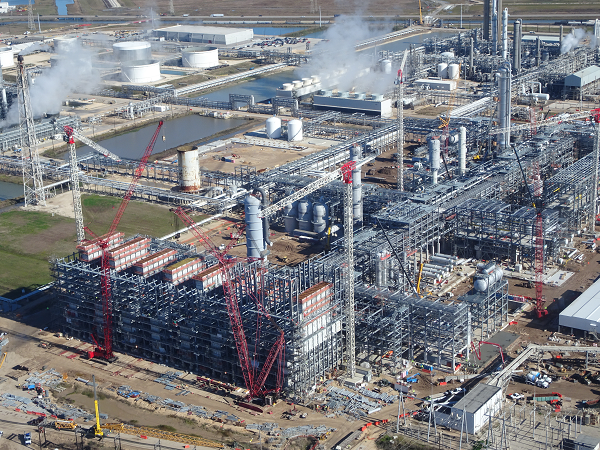 To ensure it has consistent labor supply for several years ahead, Dow transferred many of the craft workers from its recently commissioned PDH plant in Oyster Creek, Texas to the cracker project.

Ames expects labor at the ethane cracker site to peak at around 4,500 people in the second half of 2016, slightly lower than the 5,000 peak at the PDH project.

Dow also plans to debottleneck two gas-based polyethylene units in Lake Charles, Louisiana and one unit in Seadrift, Texas. The first one is scheduled to start up in Q4 2016 and the other two will come online in 2017, Ames said. 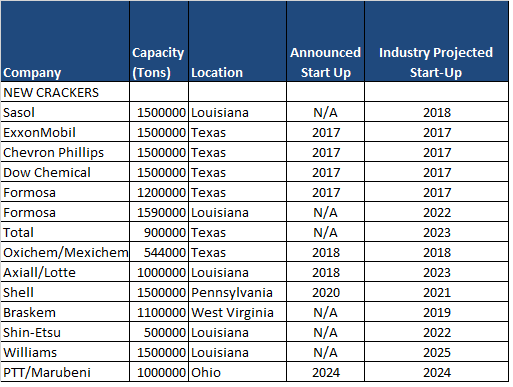 The Texas cracker and derivatives projects are part of more than a $6 billion investment in four strategic assets on the US Gulf Coast to grow the company’s ethylene and propylene supply and ethane cracking capabilities in Texas and Louisiana.

Over the last few years, Dow has changed its focus from low-margin commodity chemicals to high-margin specialty materials for fast-growing markets in the Americas such as flexible packaging, hygiene, medical, transportation, consumer durables, wire and cable and industrial specialties.

As part of the Gulf Coast investment, in late 2012 Dow restarted an idled ethylene plant at its St. Charles Operations site near Hahnville, Louisiana after almost four years, as cheap shale gas made US production more competitive.

Most recently, in December 2015, Dow commissioned a 750 KTA PDH plant, which has been operating at a 100% rate since the end of January this year, Ames said.

The company is also debottlenecking and converting its Plaquemine, Louisiana cracker to use more ethane feedstock. Dow plans to ramp up the ethylene capacity at the site, which Ames said is on schedule start up by Q4 2016, by 250 KTA.

Outside the US, Dow started initial polyethylene production in December 2015 at its Sadara joint venture with Saudi Aramco in Saudi Arabia, and expects to start several ethylene oxide and propylene oxide units at the complex in 2016. 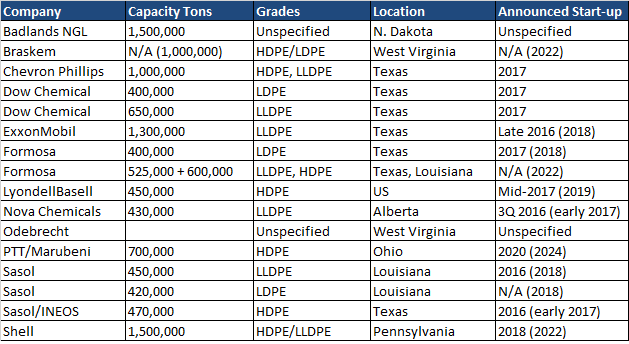 The drop in crude oil prices has not changed Dow’s investment strategy on the US Gulf Coast, May and Ames told Petrochemical Update, even as plummeting oil prices are eating into the cost competiveness of US ethane-based petrochemical players.

Even though margins for US ethane crackers remain favorable against oil-based naphtha plants and project spending in the US is still robust – especially for pure-play chemical makers – many large petrochemical projects are not moving as fast as planned, some companies have rowed back on proposals for new cracker plants and other projects are likely to be smaller than originally anticipated.

Cheap crude affects companies’ bottom lines differently across the value chain. Some companies have pursued pure-play strategies, focusing on narrow sets of chemicals, while others have opted to hedge market volatility by diversifying their feedstock and products.

Dow, which in December inked a $130 billion merger with DuPont, reported its Q4 adjusted net income was up 7% year on year on strong margin gains in performance plastics and higher volumes in all regions. Adjusted sales, excluding the impact of divestitures and acquisitions, were down 15% year on year on negative currency effects and lower feedstock costs. 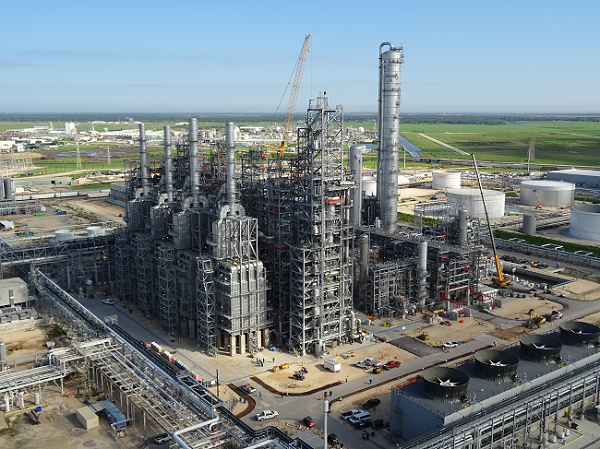 Dow's PDH facility in Oyster Creek, Texas has been on stream since December 2015. Image credit: The Dow Chemical Company.

Ames said short-term market dynamics don’t affect the company’s project execution on its US Gulf Coast projects, which are part of a long-term, global strategy to integrate and innovate its offerings regardless of business cycles.

“What we’ve got is a plan to get these plants running as quickly as we can in a controlled manner, obviously very safely, and we continue to pursue that whole strategy as this whole thing evolves,” he added.

“We think long term. We place these low-cost building blocks – ethylene in this case – where we find stranded feedstock, or economic feedstock, and then we try to keep them as domestic as we can. Sadara is going to serve Asia, while we want to keep the USGC in the Americas,” May said.

May expects about 9 million tonnes/year of new ethylene capacity to come on stream in the US by 2017-2018 – in the first wave of construction – the bulk of which from the 4-5 major projects already underway in the US. He said the second wave of projects is still in question and will likely be more staggered than the first.

Even though Dow plans to cater its US Gulf production to markets in the Americas, there will be opportunities for US petrochemical producers to serve global markets even with a more modest global growth of 2.5-3%, May added. He expects China will continue to be short of 7-10 million tons of ethylene even though it is adding new coal-based ethylene capacity.

“When you look at modest economic growth, aging existing fleet, clear signs of slowing in construction, and wave two now becoming in our mind at best delayed, we still feel very good about the outlook; we still think it’s going to be a very attractive business,” May said.