The set-jetters: how films and books can inspire digital campaigns

In-Depth: Tourism inspired by films and books has become an important market. But while there are many book and film themed websites as well as related social media resources, quality smartphone and tablet apps are still far from commonplace. Indeed, there many business opportunities on this front both for developers and their customers, writes Andrew Hennigan

If you have wanted to visit a country after seeing a film or reading a book you are not alone. Destination marketers around the world report that many visitors are partly or entirely motivated to visit countries where a film or book has been set. Many also choose to visit movie locations or specific sites mentioned in books, inspiring new digital campaigns and mobile apps.

According to a 2010 study by the UK film council, films depicting the UK are responsible for generating 10% of overseas tourist revenue.  On the other side of the world, in New Zealand, many visitors cite a single movie franchise, Peter Jackson’s The Lord of the Rings trilogy as a reason for visiting the country. Over 250,000 people have already visited the Hobbiton village set seen for the first time in The Fellowship of the Ring.

“’Set-jetting’ is a growing trend,” says James Fox, corporate press officer at VisitScotland, Scotland’s national tourism organisation. “One in five overseas visitors are inspired to visit by images that they have seen in films and on TV.”

VisitScotland recently launched a major movie-themed campaign that taps into this interest. “We have been working with Disney/Pixar to promote their new animated film Brave which is set in the Highlands,” explains Fox. “This is VisitScotland’s biggest ever worldwide campaign, is worth £7m and expected to earn Scotland £140m over the coming years.”

In the year after the 1995 film Braveheart was released visitors to the Wallace Monument, which commemorates the legendary warrior played by Mel Gibson, increased by 300%. What has changed, however, is that are now a number of different ways to market various tourist experiences.

For the Brave campaign, for example, VisitScotland has created a public website about the movie for travellers, with competitions, suggested itineraries and travel experiences. Another dedicated web page encourages businesses to develop their own Brave-related experiences. Wilderness Scotland, for example, has created an adventure holiday with family activities inspired by the film that is tied to this programme.

Although VisitScotland supports the campaign with social media activities it does not directly participate in any mobile apps.  Today, users must turn to existing smartphone apps like ‘British Film Locations’, created by ETV Online for VisitBritain, and TheMovieMap, an independent app created by web designer Darren Langley which both guides and inform visitors interested in movie locations.
In TheMovieApp new locations can be submitted by users but they are not added automatically.  “Our remit is to be as accurate with the location as possible”, says Langley, “and to pin-point the very spot the scene was filmed.  We verify each location manually rather than allowing for unqualified locations to be added to the map.”  Film makers can also submit their own location data which gives production companies another opportunity to promote their work.
Fantasy becomes reality
In New Zealand film tourism really took off after The Fellowship of the Ring was shot there in 2001. Middle Earth, the fictional setting of Tolkien’s fantasy writings, is the majestic landscapes of New Zealand. It is easy to how effective a tool this is for promoting the country as a coveted destination.

In addition to the landscapes, there are attractions like the permanent Hobbiton village set and experiences related to the Tolkien world. According to Catherine Bates, general manager of brand and international PR at Tourism New Zealand 6% of visitors cited The Lord of the Rings as one of the main reasons for visiting New Zealand and 1% said that it was the only reason – that 1% spent NZ$30m.

Tourism New Zealand has consumer content related to an earlier The Lord of the Rings trilogy on a special website, Facebook, YouTube and Twitter. The country’s tourism organisation is now working on the launch programmes for upcoming films based on The Hobbit -An Unexpected Journey, set for release later this year, and There and Back Again, scheduled for 2013. The two were shot back-to-back in New Zealand this year. “Planning on how we will leverage The Hobbit movies is ongoing,” says Bates adding that while work will not commence for some time yet, “it will include the full range of digital marketing and communications”.

France’s Provence-Alpes-Cote d’Azur (PACA) region (after Paris is the country’s most popular region for film production) has also recognised the importance films for tourism. In 2011 it commissioned a 100-plus page study on the economic return from films made in the area.  According to the report, 15% of visitors surveyed said this was the main reason for their visit.

To exploit this interest, PACA’s Tourism Board sponsored the development of a smartphone app.  Created by ZeVisit, the CinéPACA iPhone and Android app helps tourists find locations in the region for films like The French Connection and Mr Bean’s Holiday. For the moment, however, it is only available in French.

It is not just films, however, that inspire travel. Books, be they today’s international bestsellers or literary classics, also contribute to the tourism business. Admirers of Karen Blixen’s Out of Africa visit the scenes of her African adventures in Nairobi, Kenya. Fans of Dan Brown go to Paris where a Google search turns up dozens of Da Vinci Code walking tours. And in Stockholm the interest in Stieg Larsson’s Millennium trilogy is so strong the local Stadsmuseum has a small exhibition on this theme, linked with walking tours of the key book and movie locations in the city.

In Dublin, which was designated a UNESCO City of Literature in 2010, legendary writers like George Bernard Shaw, Oscar Wilde and James Joyce are a major pull. “Since 2010 there has been a notable interest in Dublin as a literary destination,” says Louise Tolerton of Fáilte Ireland, the Irish national tourism development authority. “In travel guides to Ireland and Dublin the literary heritage is often cited as a strong reason to visit the city.” This inspired Dublin’s ‘City of Words’ map and a dedicated website www.discoverireland.ie/literary.  The literary information is also displayed with other visitor information on the DiscoverIreland app, available from www.discoverireland.ie/aboutmobile.

App inspiration
Lovers of Joyce’s novel Ulysses can follow in the steps of its protagonist Leopold Bloom thanks to a smartphone app called Joyceways.  “I needed a way to open up this difficult book to a bunch of American college students”, says Joseph Nugent, associate professor at Boston College who teaches a course on the book. “So I engaged them in active reading that involved tracking the movements of the characters across the city.”
The students had the idea of sharing this knowledge to the world through a smartphone app, instituted a crowd-funding campaign on the Kickstarter website to fund it and did much of the concept work. The result is a GPS-guided tour of the Dublin of 1904, following in the footsteps of Leopold Bloom. You can use it on the streets as a guide or visit the locations virtually.
Developed by Big Top Multimedia, the firm that produced the official guide to Dublin, Joyceways was released in June and has been given many favourable user reviews. However, replicating its success will take some commitment. “Through three years of Ulysses seminars at Boston College we honed the ideas”, explains Nugent, “and in the last six months we put it into action. Help from the university, financing through Kickstarter and enthusiasm of the students also made it happen.” 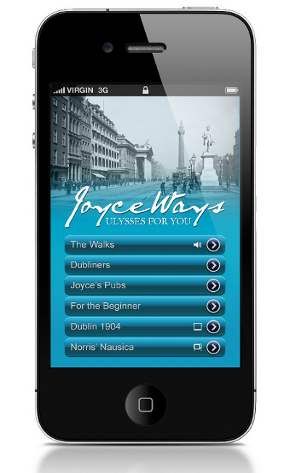 Joyceways was conceived for smartphones but user feedback suggests it is also popular with tablet users. “This is because we used high-resolution images which makes it particularly satisfying on the iPad’s larger screen,” says Nugent. “It’s clear from comments that many people are using it not primarily as a travel app but as a reading companion for Ulysses.”
This literary inspiration is certainly an indication of what is possible. So it seems likely that right now destination marketers in all corners of the world are crafting digital campaigns that go further in generating more revenue and customer satisfaction. And if they are not, they should be.
Andrew Hennigan is a freelance writer, speaker and communications consultant