The decision by U.S. and China to rise above strained relations over issues such as human rights to work together on climate change is a huge boost for hopes for a meaningful increase in ambition at critical climate talks in Glasgow later this year.

A joint statement by U.S. special climate envoy John Kerry and his opposite Chinese number, Xie Zhenhua, committing the world’s two biggest emitters to “cooperating with each other and with other countries to tackle the climate crisis” earlier this month paved the way for President Xi Jinping to participate in last week’s Earth Day climate summit of 40 global leaders hosted by President Joe Biden.

And while in his virtual address Xi only restated a goal announced last September for China to peak its CO2 emissions by 2030 and reach net-zero by 2060, he also pledged to “strictly control” China’s build-out of coal-fired power plants and phase out coal consumption from 2025.

The development comes amid fears that China is not moving anywhere near fast enough to peak emissions by the 2030 deadline, amid a steep rise in coal use in the past year, which fuelled a 2.3% increase in GDP.

The 14th five-year plan is not ambitious enough. If it stays as it is, all the work will be in the latter half of the decade

Global Energy Monitor reported earlier this month that while most of the rest of the world retreated from coal in 2020, retiring 37.8GW of coal plants, China offset these gains by commissioning 38.4GW of new coal last year – resulting in the first increase in global coal capacity since 2015.

China’s latest five-year plan had also disappointed, with goals for reducing energy consumption and CO2 per unit of GDP no more ambitious than those set in the previous five-year plan, and only a “modest acceleration” in adding wind and solar to the energy mix, according to a research note by Morgan Stanley, which predicted that total emissions in China could grow by 8% between 2020 and 2025.

China also accounts for more than 75% of energy-intensive bitcoin mining, due to its cheap coal-dominated power grid. A study in Nature Communications predicts that, without policy intervention, CO2 emissions from the industry in China will exceed the total greenhouse gas emissions from major economies like Italy and Saudi Arabia by 2024. 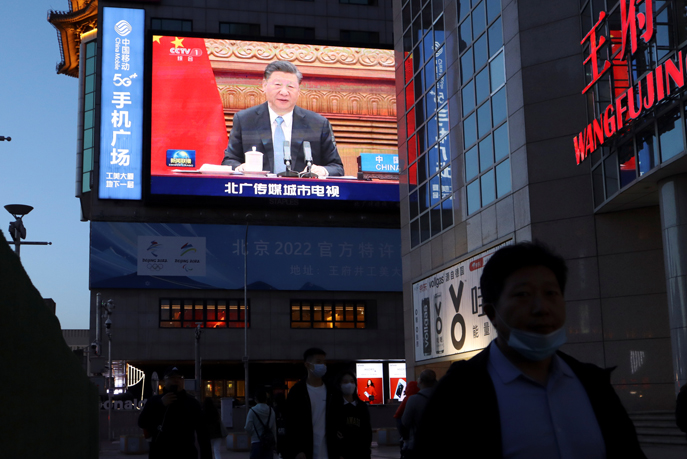 Cary Krosinsky, author of the book “Modern China: Financial cooperation for solving sustainability challenges”, agrees that it will be difficult for China to peak its emissions ahead of 2030 on its current trajectory.

“The 14th five-year plan is not ambitious enough. If it stays as it is, all the work [of cutting CO2 emissions] will be in the latter half of the decade.”

But he observes that China’s leaders have a year to finalise the details of the five-year plan.

“No country changes as quickly as China,” Krosinsky said. “There are internal conflicts [between different ministries], but the scales have tilted to sustainable development. [China’s leaders] want to solve the air quality and pollution challenges for their people.”

One positive sign is that Yi Gang, the governor of the People’s Bank of China, reportedly told a closed door meeting of the China Development Forum in March that China’s central bank is cooperating with the European Union to converge green investment taxonomies and is aiming to implement a jointly recognised classification system for sustainable investment by the end of the year.

This could be hugely significant given that China is the world’s largest financier and builder of fossil fuel infrastructure worldwide, and Chinese financial institutions and companies fund one quarter of coal-fired plants outside China, according to Climate Action Tracker.

Another is China’s much delayed national emissions trading system, which is expected to finally begin operating in June, helping to decarbonise the power sector in its first phase, before being rolled out to other high-emitting sectors. 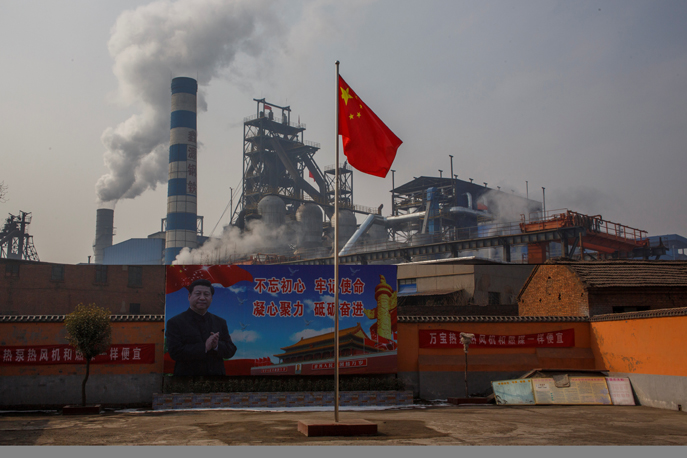 And while the pace of renewable energy roll-out may have slowed, China leads the world in development of nuclear power, which Europe’s Joint Research Centre recently recommended could be included in Europe’s sustainable investment taxonomy plan – though nuclear was not one of the technologies mentioned in the joint statement.

Tim Nixon, co-founder and CEO of Signal Climate Analytics, expressed scepticism that Europe and China would be able to align sustainable investment taxonomies and allow ESG finance to flow into Chinese companies.

He points out that Chinese industrials dominate a list of the world’s 250 biggest greenhouse gas emitters, compiled by Signal Climate Analytics in a collaboration with Reuters to delve into the extent to which big corporates are bringing their operations in line with the global agenda of keeping global temperature rises to well below 2C.

The poor performance of Chinese companies on disclosing their climate impacts, compared to western peers, can be seen in the chart below.

“Chinese industrial giants have lower levels of disclosure [than western firms]. Most don’t disclose prior emissions and don’t have meaningful public 2030 targets. Yet the whole taxonomy is built on investors being able to look into a company and measure the different parts of it to judge how ‘green’ or ‘brown’ it is. We have nowhere near that level of transparency right now in China.”

He points out that China’s coal dependency and high energy consumption per unit of GDP (at $2.12 kWh in 2016, compared with $1.49 kWh in the U.S. and $0.86 kWh in the UK) has impacts on the decarbonisation efforts of all western companies, most of which have outsourced their manufacturing to China.

But delivering on corporate net-zero carbon commitments will be particularly tricky for companies, such as BP, VW, GM and BMW, that are staking future growth on providing China’s fast-growing middle class with consumer goods like cars, and the energy to run them, as governments in North America and Europe seek to regulate fossil fuel vehicles off the roads, says Nixon. 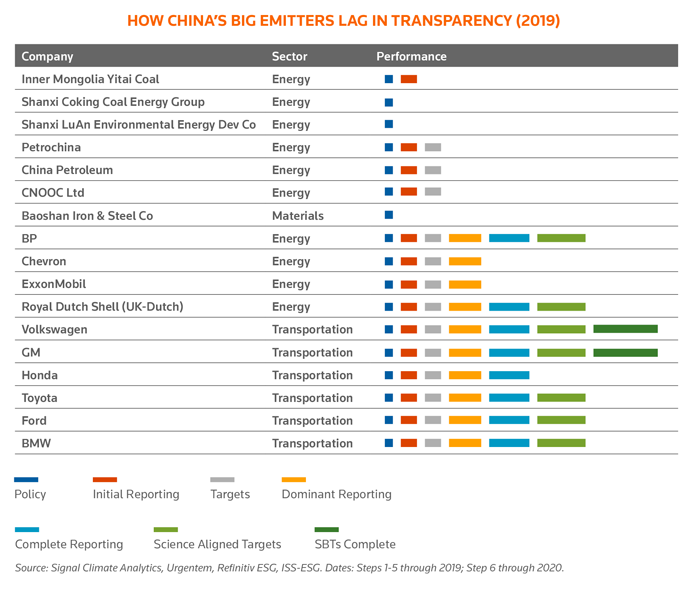 And though corporates are emphasising their electromobility plans in the Chinese market, where they have to comply with government mandates to sell a certain percentage of “new energy” vehicles, the carbon intensity of China’s grid, particularly in the north of the country, means the lifecycle carbon benefits of EV vehicles compared with internal combustion vehicles may in some cases be only marginal, according to a 2019 study for the Belfer Center for Science and International Affairs.

This was acknowledged by Volkswagen Group's CEO, Ralf Brandstätter, in an interview with the Financial Times this week, in which he called on governments to do more to decarbonise their electricity grids and increase electric vehicle charging infrastructure. "It doesn't make sense to charge an EV with coal-based energy in Poland, for example."

You have BMW with one set of decarbonisation targets and this big, important market with another

In its Power of Choice sustainability plan, launched last year, the German manufacturer says its plans to sell 4.6m fully electric and 2.4m plug-in hybrids within the next 10 years will put it on track to meet targets to reduce its scope 1 and 2 emissions by 80%, and cut CO2 emissions of its vehicles in their use phase by 40% by 2030.

“We have a progressive expansion path for electromobility, which is happening swiftly in Europe and China,” Zipse said.

But Axel Threlfall, Reuters Editor-at-Large, questioned the climate impact of the automaker’s strategy of aggressively expanding sales, particularly of gas-guzzling mid- and large-size SUVs. According to data from the Transition Pathways Initiative, in order to be compliant with a 2C world, the average carbon intensity of BMW’s global fleet will have to fall dramatically, from 133g of CO2 per km travelled to 41g or 42g by 2030. “Is [reaching that target] realistic?” Threlfall asked. 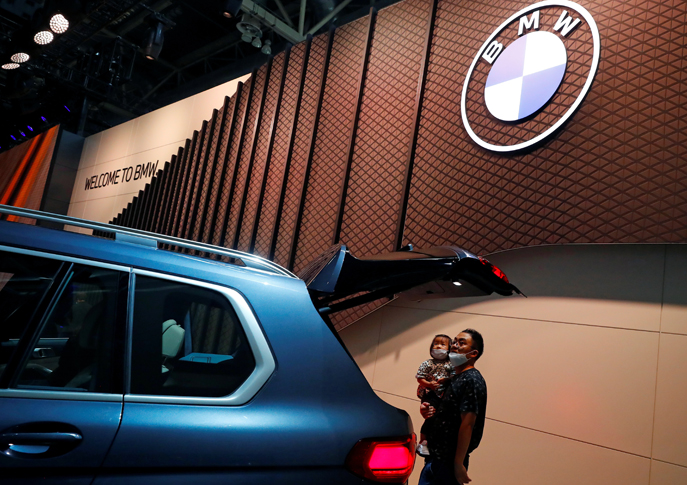 BMW is one of the car companies with ambitious net-zero commitments that are targeting growth in China.  (Credit: Thomas Peter/Reuters)

Although the 133g figure was in BMW’s own report, Zipse questioned where it had come from, and instead quoted the 90g per km figure for Europe. “At the end of the day it’s important that we have new cars,” Zipse said. “The worst outcome [for climate change] is if customers stop buying cars and drive their old [more polluting] cars forever.”

Nixon is not convinced. “You have BMW with one set of decarbonisation targets and this big, important market with another. How is that going to work? You have a mismatch and wherever we see that mismatch we know from experience that the climate is going to suffer.”

This article appears in the April 2021 issue of The Sustainable Review: See also:

PepsiCo’s biggest challenge: winning over millions of...
Editor’s letter: Can tourism tread more lightly?
Can business travel get onto a more sustainable flight-...
Why business journalists need to challenge the ESG orth...
comments powered by Disqus