Essay: Philanthropy works when the giver can gain too

Simply giving cash is like throwing money away, when compared with the good a company can achieve by donating its expertise

Climbing Borneo’s Mount Kinabalu is hard work. Climbers are legally required to hire a guide. Not that it always helps: guides sometimes just abandon the tourists and climb with each other. And why wouldn’t they? There’ll be a fresh batch of tourists tomorrow who will be obliged to give them money.

When I went up the mountain, I was lucky: the guides supporting my group stuck with us, even on our incompetently slow descent. They even missed their village football match for us.

Why did they care? Probably because I was travelling with Intrepid Travel, a global “adventure tour” organiser that takes loads of groups to Borneo. Intrepid Travel has given generously to the guides’ village, supporting teaching programmes and providing learning resources. Clever: the villagers value their good relationship with Intrepid, and consequently the guides look after Intrepid’s clients assiduously.

Is Intrepid’s work in that village “charity” or is it “investing in the business”? It’s both. Great corporate philanthropy always is.

One of the best examples of corporate philanthropy is from Goldman Sachs, the investment bank. It’s probably the first heart-warming tale from the world of high finance you’ve heard for a while.

Globally, we lose 2.3 million children each year to preventable diseases such as pneumonia, diarrhoea and yellow fever. Various governments pledge money for developing and delivering immunisation, though the timing of their funding is unpredictable.

Goldman Sachs provided a small group of bankers on a pro bono basis to create the innovative International Finance Facility for Immunisation for the Global Alliance for Vaccines and Immunisation (Gavi), a charity. This takes the governments’ commitments and, by issuing bonds secured against them, makes the money available upfront. This enables Gavi to plan better, which accelerates research and development, reducing vaccine prices and speeding up delivery.

Vaccinations enabled by the bond are expected to protectmore than 500 million children in about 70 of the world’s poorest countries, and the bonds themselves are credited with saving at least 3 million lives.

Let’s suppose that this project occupied three bankers for two years, ie took six person-years. The cost of that time (even the opportunity cost) to the bank might have been, what, a few million dollars? Saving three million lives – three million pointless pregnancies, three million risky births, three million incidences of grief – is a cracking return on a few million bucks. A couple of dollars per life: it’s rather humbling really. Goldman Sachs only got that return by using its virtually unique skills in financial wizardry: it would never have got that by dishing out cash.

More than “just” altruistic, the bond has been good for Goldman itself. Good for morale. “The opportunity to marshal the resources of Goldman Sachs to help improve the lives of millions of children is profoundly meaningful,” says Michael Sherwood, co-chief executive of Goldman Sachs International. And good commercially, since Goldman Sachs is one of several banks that sell the bonds. It’s been criticised for this – though not, I notice, by any of the half-billion children.

Contrast that with a recent giving programme by NatWest, the UK retail and wholesale bank. It invites charities to apply to its CommunityForce programme, and those that gather the most votes on CommunityForce’s website get grants of £6,000. It gives about £2.5m a year: about the same as Goldman Sachs’ “donation” to immunisation.

Yet CommunityForce achieves much less: its “winners” are chosen on popularity, and since there’s no connection between that and merit (consider a great charity working with homeless people, who generally aren’t online), may not be much good. The application process is very labour-intensive for charities. NatWest solicited loads of applications of which it rejected 93%, so it created masses of wasted work. And the resulting £6,000 grants are “restricted” (ie ring-fenced) which demonstrably reduces their value.

For any donor, the best giving makes more than just a little improvement to the world: it finds where and how its resources will make the greatest possible impact. Soit finds the intersection of two questions: 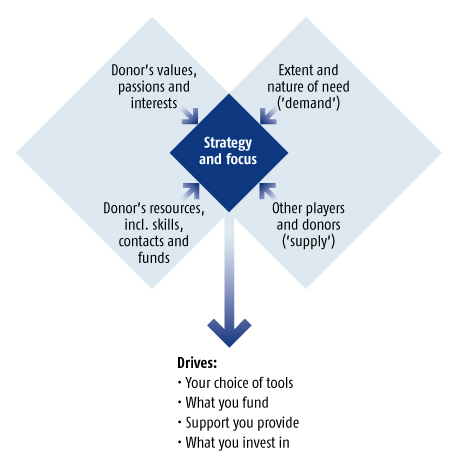 On the right-hand side of the Best resource deployment diagram are the needs in the world that need addressing and haven’t been met by businesses, government or NGOs to date. Clearly, programmes should always target priority problems – ideally problems identified as problems by the beneficiaries rather than solely outsiders – and select their NGO partners on merit.

On the left of the diagram, a company’s resources includestaff, offices, brands, teams, distribution systems, warehouses, training programmes, relationships with accountants, systems, information, knowledge of government, and so on. The aim of making best use of the available resources is precisely analogous to comparative advantage, and so it’s surprising if giving cash to another organisation is better than using any of the company’s bespoke resources and capabilities. As Kurt Hoffman, then director of the Shell Foundation has observed: “Money is the least valuable social change asset.”

Second, a company’s interests include those of its shareholders. In listed companies, the company’s resources don’t belong to the people giving them. Shareholders are within their right to be interested solely in capital growth and dividends, and to be unimpressed at a company giving away their money. (Oddly shareholder revolts about dismal corporate giving are rare, presumably because the amounts involved are negligible compared to those affected by other corporate decisions.)

So should a public company give at all, and if so, when? Two criteria seem sensible.

1) If giving creates value for the company. It might increase sales, decrease costs, hone skills, bring reputational benefits, improve customer service by getting tired clients down the mountain safely, improve skills in the pool from which the company hires staff, or improve morale. Given that companies are spending somebody else’s money, it’s hard to see why they’d be shy or apologetic about gaining commercial value from it.

Does CommunityForce create value for NatWest? Probably not much. It appears to have been designed for PR, though many people complained about the technology platform used for the voting, and it’s hard to imagine that the 93% of rejected charities were delighted by the experience.

Corporate philanthropy schemes are often designed for PR and brand building. But they are patently not essential for building brands: people left candles and flowers outsides Apple stores around the world as tributes after the passing of Steve Jobs – under whose leadership, his company, beloved of so many, gave barely a pip to charity. It’s even been criticised for making it difficult for customers to donate to charity through its phones and other products.

At a more sophisticated level, a company’s giving may create value by bringing about a social change that is beneficial for the company. The Coca-Cola Company in Africa used the trucks and network that form its legendary logistical operation to combat the spread of HIV and Aids. It distributed condoms and attractive informational materials to all those dusty villages in the back of beyond where, astonishingly, you can always get a Coke.

Not just serving a major need, but creating value for the company because, by 2002, Coca-Cola was Africa’s largest private sector employer and stood to lose a great deal by declining physical and economic health of the population.You probably didn’t know about this: there wasn’t a massive PR campaign about this work in the west because the goal wasn’t reputation but rather keeping staff and customers alive in Africa.

“The acid test of good corporate philanthropy is whether the desired social change is so beneficial to the company that the organisation would pursue the change even if no one ever knew about it,”say Mark Kramer and Harvard Business School professor Michael Porter.

2) If the giving achieves more than individual shareholders could achieve themselves. After all, shareholders put commercial money into the company to achieve a financial return which they could not achieve themselves. Corporations meet this if they deploy their unique sets of assets and market positioning in some useful way which only that company could do. Hence giving should relate deeply to a company’s strategy. Dishing out cash rarely meets this criterion.

It’s slightly different for private companies. Because the owners of private companies are not beholden to external shareholders, they can choose whether they mind if their giving creates commercial value for the company or not. However, their philanthropy is still most effective if it uses the company’s unique assets in a strategic manner.

What about giving money?

Straightaway it’s clear that simply looking at how much companies give (whether money or staff time or anything else) indicates nothing. It’s a measure of input, and, like most measures of input, is irrelevant to impact. There once were rankings of companies based on how much cash they gave, which mercifully have disappeared now: not only did they ignore non-cash donations but simply looking at what is given indicates nothing about what is achieved.

From the analysis above, you may have figured that I’m sceptical about corporations giving solely money. If “money is the least valuable social change asset” and companies have a dazzling array of more valuable assets they can deploy, why are they giving money at all? Is that really the best option they can think of?

Going back to our NatWest example, you might ask: what’s really wrong with that? The missed opportunity, that’s what. The resources that it gives could deliver so much more. People miss out because these resources are given in the wrong way. Even if it reaches effective charities, money alone is much less valuable than other resources that could be given at the same cost.

Perhaps this is harsh. Perhaps it’s enough to look at whether the charities are effective. I don’t think so: we should always strive for our giving to achieve not just something but everything possible.

Goldman Sachs could have made money from those bankers’ time and simply given it to the vaccine programme, but it would never have created anything like the impact of the bond. Intrepid Travel could have supported an effective charity anywhere. But by supporting a village from which it draws guides, it not only does work worthwhile in its own right, but also enhances the customer experience, which is good for the company, makes more revenue available for good works in future, and hence makes it easier to continue.

The trick with corporate giving is finding the intersection in the diagram above, where the company can best help for least effort, and creating benefit for itself that makes the giving defensible and sustainable. Because in terms of impact for the company and for beneficiaries, it ain’t what you give, it’s the way that you give it.

Caroline Fiennes is director of Giving Evidence, which advises on giving to donors of all descriptions. She is author of It Ain’t What You Give, It’s The Way That You Give It, from which this article is an edited extract. Readers can buy the book at an introductory discount: www.giving-evidence.com/book.

The CR Reporting and Communications Summit 2012

Good for General Motors, but is an electric Hummer good for the planet? https://t.co/kL87VTNhSZ #EVs #Automotives… https://t.co/rpSjuTxKBr