The city of 15 million has slashed CO2 emissions and carbon intensity through a city-wide cap and trade scheme. Angeli Mehta reports

Shenzhen on the Pearl river delta, home to more than 15 million people, was the first of China’s seven emissions trading pilots.

With almost four years of a carbon market behind it, Shenzhen will provide valuable experience to inform the country’s national trading system, due to be launched by the end of the year.

Almost 20 years ago, Shenzhen became the country’s first “model city for environmental protection”. As a relatively young city it has encouraged hi-tech companies, tried to move away from more polluting industry, and shifted energy production from coal to gas.

It has got rid of energy-intensive businesses – 3,074 of them in 2014 alone – according to academics at the Harbin Institute of Technology. That has helped cut emissions from the manufacturing and energy sector. Shenzhen has pledged that its greenhouse gas emissions will peak by 2022, well ahead of the national target date of 2030.

Shenzhen’s carbon market covers about 40% of its total carbon emissions. Its stated goals were to cap enterprise emissions and reduce carbon intensity by 25%.

The latest figures, for 2015, show that 636 regulated companies cut emissions by around 5.8m tonnes compared to 2010, and decreased carbon intensity by over 41%, almost achieving the 45% target set for 2020.

A cap that fits

Rather than an absolute cap on emissions (as in the EU system) Shenzhen opted to cap carbon intensity, so companies can either make changes to their processes or improve efficiency. The cap was established after using both benchmarking and historical industry data.

Companies that operate below the cap can keep or sell their surplus allowances. In its first three years, allowances covered around 100m tonnes of CO2, which industry observers suggest was more than they would have emitted. According to climate leadership group C40 Cities 90% of allowances were free of charge. Participants also had a means to offset carbon emissions (some 12m tonnes over three years) through certified projects. 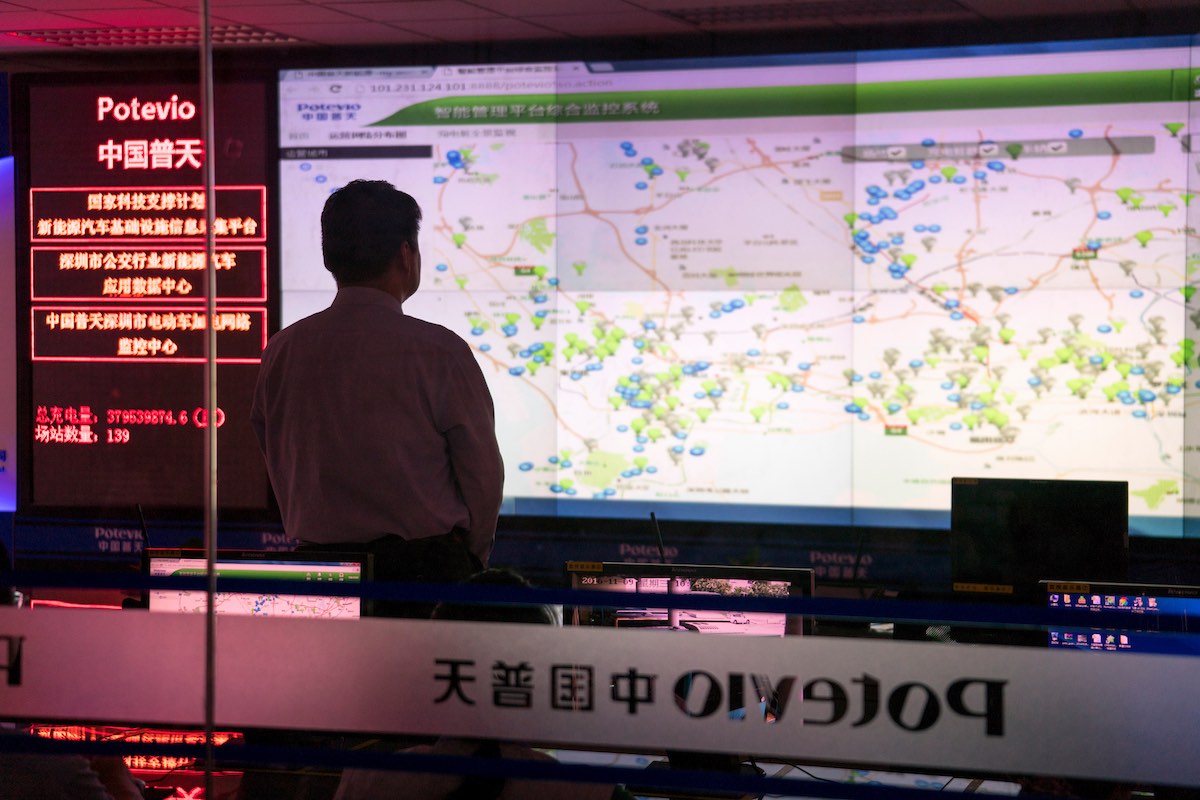 The China Emissions Exchange reports that more than 18m tonnes were traded in the first three years of the scheme, worth some 596m yuan (£66m). Tingyu He, Shenzhen city advisor at C40 Cities, says it had “the smallest trading volume, but the most active market” compared to the other pilots. She adds that it is the only scheme to allow foreign transactions. Several international oil companies are reported to have entered trading there.

Shenzhen has actively supported sectors such as IT, bioengineering, clean energy, and new materials. It boasts some of the world’s biggest tech companies: telecoms giant Huawei; BYD, which makes electric plug-in vehicles and solar panels; and web giant Tencent. He of C40 Cities observes that “it is quite challenging to cut emissions from already less polluting industry’”.

The city has had much success cutting emissions in the transport sector. “There are around 57,000 new-energy vehicles in Shenzhen, more than all the other cities in China,” according to Dr Yu Liu, executive director of the new energy research institute at the China Development Institute in Beijing. He points out that Shenzhen’s mayor has committed to all buses being electric by the end of the year.

Private transport has been more problematic, says C40's He. ‘If you’re dealing with big companies you only need negotiate with the responsible people, but with 3 million private cars it’s going to take time.” It will also take legislation. Liu says Shenzhen has offered generous subsidies for drivers to switch to electric or plug-in hybrids, as well as a free license plate, for which drivers of conventional vehicles have to spend upwards of £2,000. As a result, he says, there were around 30,000 electric and hybrid cars on the road by the end of 2016. 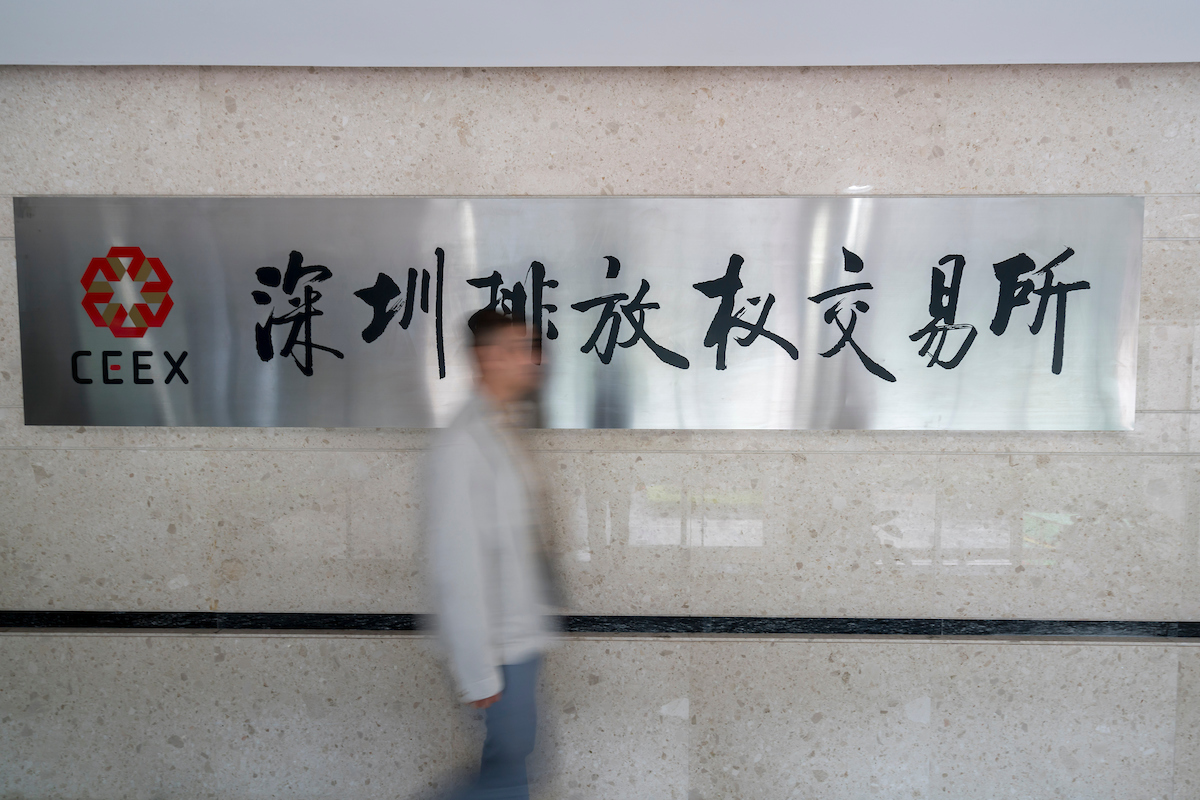 The CEEX has traded more than 18m tonnes of CO2 (credit: BRENT NG/AP IMAGES FOR C40)

“Promoting green buildings is an important policy, and I think it is successful,’ says Liu. Legislation came into force in 2013, and now there are over 33 million square metres of buildings that meet China’s green buildings standard. The city also enforced installation of solar heating systems in buildings less than 12 storeys high. However, reports suggest that older industrial buildings on the edges of the city are still major consumers of energy.

Companies themselves have taken various approaches. Liu says Yayork Plastic Products, which specialises in sports equipment, met its obligations by installing energy-efficient air conditioners and improvements in machine motors. In its report on the first year of carbon trading, the China Emissions Exchange, highlights plastics moulding group Lintall, which upgraded manufacturing facilities, and invested in renewable energy and energy saving equipment. Its international customers also had an impact, because Lintall had to meet their standards for clean production and emissions reduction.

As learning points for the national scheme, Liu suggests businesses and employees be educated about emissions and energy-saving. “At first [many] companies didn’t know how to calculate emissions inventory [or] how to cut emissions.” That changed when third-party evaluators got involved.

Shenzhen’s scheme covers almost 30 industries, but most of these won’t be large enough to enter the national market when it begins. Only the electricity sector is a big enough emitter. However the city plans to carry on with its emissions-reductions goals through investing heavily in energy conservation and the circular economy.

Can business bridge the yawning gap in finance for natu...
Calls grow for companies to disclose nature impacts in ...
‘We are sliding from climate crisis to climate disast...
Brand Watch: Things go badly for Coke, as activists att...
comments powered by Disqus