Vaccines are widely considered one of the most powerful and cost-effective health interventions available. They were a major focus of the Millennium Development Goals, the precursor to the SDGs. Gavi, the Vaccine Alliance, was established in 2000 - a collaboration between the WHO, Unicef, the World Bank, individual countries and pharmaceutical companies to accelerate access to life-saving vaccines in some of the world’s poorest countries.

While Gavi has helped to immunise close to 700 million children, averting 10 million deaths, global immunisation levels have stalled, and have hovered at around the 85% level for the past three years.

According to the World Health Organization (WHO) over 95 million children a year are still missing out on their basic vaccines, leaving them at risk of potentially deadly diseases such as measles, mumps, tetanus and typhoid.

Its innovative partnership model is based on what Nguyen calls a dual market, which allows manufacturers to sell a vaccine at a premium price in the developed world, and to Gavi for a much lower cost.

In the case of pneumococcal vaccines, a financing structure called the Advanced Market Commitment guarantees the market for a new vaccine, with Gavi pooling demand and giving manufacturers the confidence to invest. 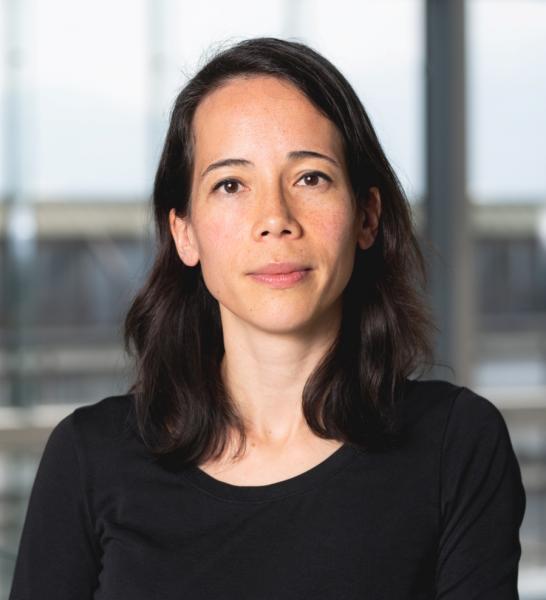 For others, such as those for Ebola, where the disease is non-existent in high-income countries, Gavi commits to buy a vaccine once it is licensed, again creating a guaranteed market for the manufacturer.

But procuring vaccines is the relatively easy part; dispensing them throws up whole new problems, says Nguyen. “How do we distribute and deliver them where they are most needed? I think is one of our big questions going forward.”

In order to try to boost stalled global immunisation rates, manufacturers are working to develop products that are suitable for developing countries, with many vaccines now thermostable, meaning they can exist outside of the cold chain for longer periods of time when there is no access to electricity. Packaging has also been designed to be as small as possible to optimise precious fridge space.

While the world has seen massive increases in immunisation coverage, progress has not reached the last mile

GlaxoSmithKline (GSK), one of the major global vaccine suppliers, has made a small but important change to the way it supplies Synflorix, a pneumococcal vaccine that could prove important in helping to defeat pneumonia, which kills two children every minute.

GSK now provides a four-dose vial, doubling the number of children that can be vaccinated per unit and reducing the physical space required during delivery and storage. A new formulation also means that once opened, the vaccine lasts up to 28 days instead of just six hours.

The International Federation of Pharmaceutical Manufacturers & Associations (IFPMA), which includes the likes of Johnson & Johnson, GSK and Novartis, is also an important partner for Gavi. Earlier this year it announced a further £1m of support for the Strategic Training Executive Programme (STEP), which uses pharmaceutical company expertise to train supply chain managers in Gavi-supported countries. STEP has now been rolled out in the Democratic Republic of the Congo, Ghana, Nigeria, Benin and Mozambique. 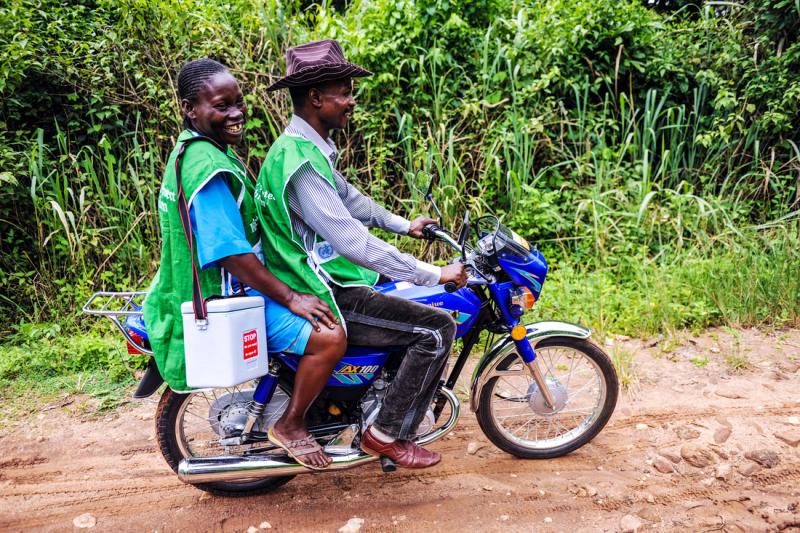 Well-trained community health workers are also crucial to the effectiveness of any immunisation campaign and Gavi is working with philanthropic group the Audacious Project, as well as NGOs Last Mile Health and Living Goods, to boost the number of CHWs and integrate immunisation information and data-capture into their daily routines. (See, SDG3: Community health workers key focus in push to bring vital medicines to all)

The $18m initiative is set to help give over eight million people, living in remote areas across Liberia, Uganda, and Kenya, access to vaccines. As Last Mile Health’s CEO Dr Raj Panjabi says: “While the world has seen massive increases in immunisation coverage over the past two decades … progress has not reached the last mile.”

The health workers will use smartphones to capture the immunisation status of every child in real time, as well as sending carers vaccination reminders by SMS, which together will help to close so-called immunisation gaps.

Another high-profile use of technology is the mVacciNation programme, a partnership between GSK and Vodafone launched in 2016 that uses a smartphone app to enable frontline health workers to capture data for each child they vaccinate. In 2017, the programme was extended to Nigeria and Tanzania, where nearly 200,000 vaccine doses were administered to children.

“The aim is to make it as easy as possible to overcome barriers to immunisation in parts of the country that might otherwise be out of reach or have a weak health system, thereby reducing the number of child deaths caused by vaccine-preventable disease,” explains Aleena Khan, Amref UK’s programme officer, which also partners in the project.

Another important player is the Access to Medicine Foundation, an independent not-for-profit based in the Netherlands that helps pharmaceutical companies to do more for people living in low- and middle-income countries without access to medicine. 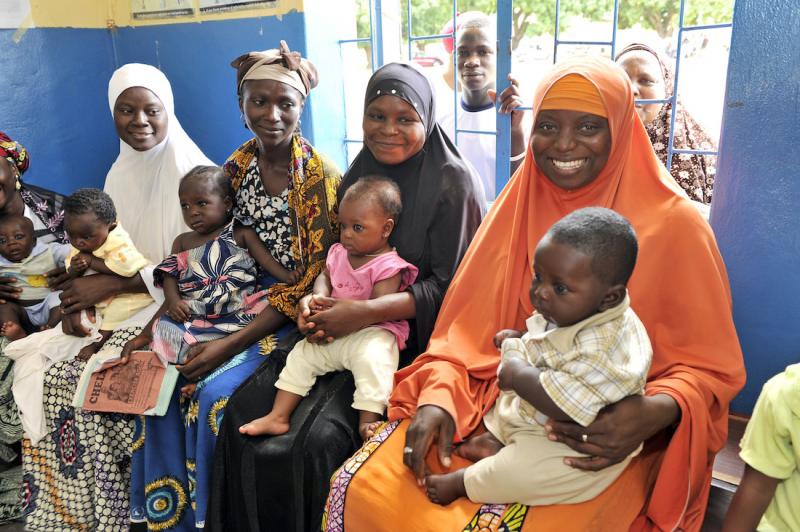 Mothers wait for their babies to be immunised in a Nigerian clinic. (Credit: Gavi/2013/Adrian Brooks)

The foundation believes that the pharmaceutical industry has a clear role to play in developing new and improved vaccines, as well as addressing issues of affordability, and supply and demand.

Last year, it published the first Access to Vaccines Index (a new version is due out later this month), that maps how eight of the world’s largest vaccine companies are responding to the challenge.

Executive director Jayasree K Iyer says the index is a comparative analysis of the relatively small number of major vaccine producers, benchmarking the companies against their peers, highlighting best practice and “utilising the competitive nature of the pharmaceutical industry” and directing it towards a social good.

Our work in global health, whether in vaccines or supporting third party partners, is not philanthropy

The index takes the form of a report card, and draws on publicly available information, as well as that provided by companies, to highlight areas for improvement and future opportunities.

“Companies over the years have grown to trust the way in which we look at their work,” says Iyer. “The information helps companies when it comes to renewing strategies or approaching a particular problem,” including negotiating with Gavi around drug purchases.

The foundation also works with a pool of over 70 investors, including pension funds and banks, which use the report cards to interrogate businesses around their environmental, social and governance (ESG) activities. 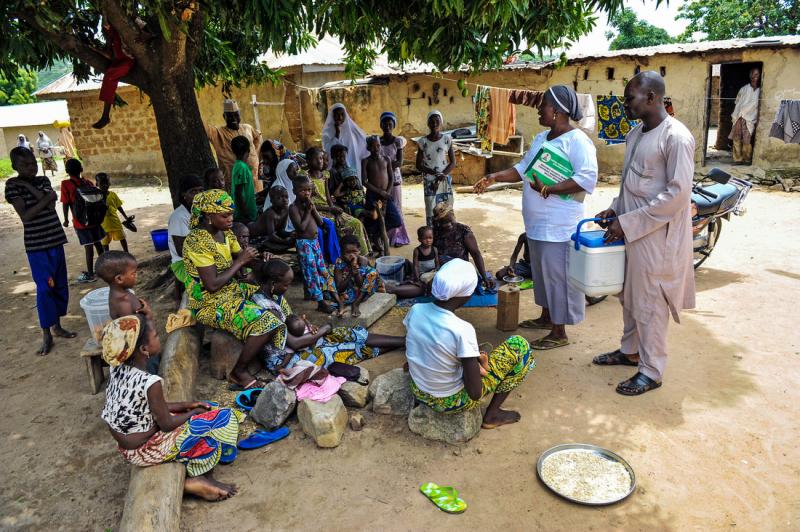 GSK was the top performer in the most recent index, leading in all three categories of research and development, manufacturing and supply, and in pricing.

Clare Griffin, vice-president for global health communications at GSK, emphases the business impact of its access to medicines work. “Our work in global health, whether in vaccines or pharmaceuticals, or supporting third party partners, is not philanthropy,” she explains.

GSK has recently redefined its approach to global health and is now focusing on infectious diseases – specifically malaria, HIV/AIDs and TB – that affect young people in the developing world. The work will be science-led, sustainable for GSK and prioritised for impact, she says.

“This brings tangible business benefits – the science in these disease areas is often transferable, it helps us attract and retain the best people, since employees are highly motivated by this work, and governments, who are often our customers, want us to be active in this area,” she adds.

It’s an approach that “means doing fewer things better, so that our investment in global health research leads to the greatest possible impact over the long term”.

This article is part of the in-depth Partnering for Health briefing. See also:

‘Get the blend right’ and we can unlock trillions i...
As energy security concerns trump climate, will drive t...
The woman at the eye of the storm of Asia’s rising cl...
How governments are giving to nature with one hand and ...
comments powered by Disqus