Non-communicable diseases (NCDs) are one of the world’s great killers. According to the World Health Organization (WHO), cardiovascular and respiratory diseases, along with cancer and diabetes, are the cause of seven deaths out of every 10, including 15 million people a year who are in the prime of their lives (30-69), most of whom come from developing countries.

“NCDs are a growing global health challenge, and they represent a huge economic burden, particularly in low- and middle-income countries,” explains Frances Longley, chief executive of Amref Health Africa UK, an NGO at the forefront of improving people’s access to healthcare, especially those living in the continent’s remotest areas. “Yet the fight against NCDs receives comparatively little attention, and is consistently underfunded.”

If the world is to achieve Sustainable Development Goal 3 on good health and well-being, and make universal health coverage a reality by 2030, she says, “the global health community must step up its efforts to combat NCDs”.

There is a growing recognition among pharmaceutical companies that they have a responsibility to respond to the challenge of access to medicines. From bodies such as Access Accelerated, a cross-industry collaboration between 24 pharmaceutical companies, to individual company initiatives such as Takeda’s patient assistance programme, which guarantees eligible patients the treatment they need, even if they can’t afford to pay for it in full, to Novartis Access, which offers a portfolio of 15 medicines to governments and NGOs at $1 per treatment per month.

But it’s not just about making medicines freely available, says Kileken ole-MoiYoi, head of the Novartis Africa Health Alliance, a body established to help build healthcare systems across the continent. “There is such a dearth of trained health workers, particularly in sub-Saharan Africa, that without strenghening CHWs we really won‘t be able to have the improved patient health outcomes that we desire," he says.

His frustration is shared by Daryl Burnaby, director of frontline health worker programmes at GlaxoSmithKline (GSK), though GSK’s focus is more on healthcare worker programmes in infectious diseases. “With programmes in over 40 countries, and with multiple partners, we were finding that even if we reduced our prices and improved our distribution networks in developing countries, essential medicines and vaccines were still not reaching those that really needed them,” he explains. 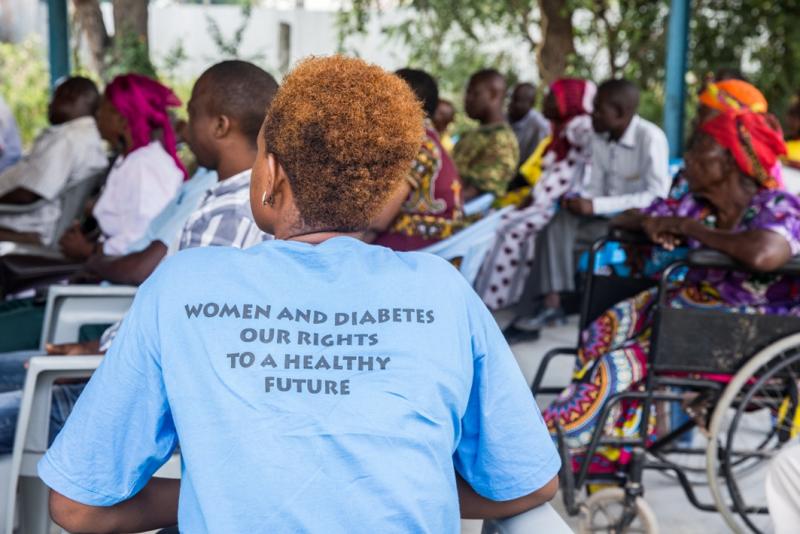 In many developing countries, community health workers (CHWs) are the foundation of the health system, the first point of contact people have with formal healthcare, and an important link with state-run services.

“They are trusted figures in their communities, and they’re a crucial source of support for the households they’re responsible for,” says Longley. “Because of this, they can play a vital part in the prevention, management and control of NCDs.”

The challenge is starkest in sub-Saharan Africa, which bears a quarter of the global disease burden, yet is home to just 3% of the world’s health workers.

“If you can invest in bridging that gap and training health workers, then you go a long way to improving peoples’ access to medicines and vaccines,” adds Burnaby.

Part of the problem is that CHWs have been seen historically as volunteers. “For a long time, the concept of a community health worker really was developed and scaled up in association with HIV, and more often than not they were community health volunteers,” says Ole-MoiYoi.

CHWs tended to be paid in respect, not wages, he says, but ultimately this leads to an unsustainable system, as you have to train more and more people to take the place of those who leave to find paid employment. 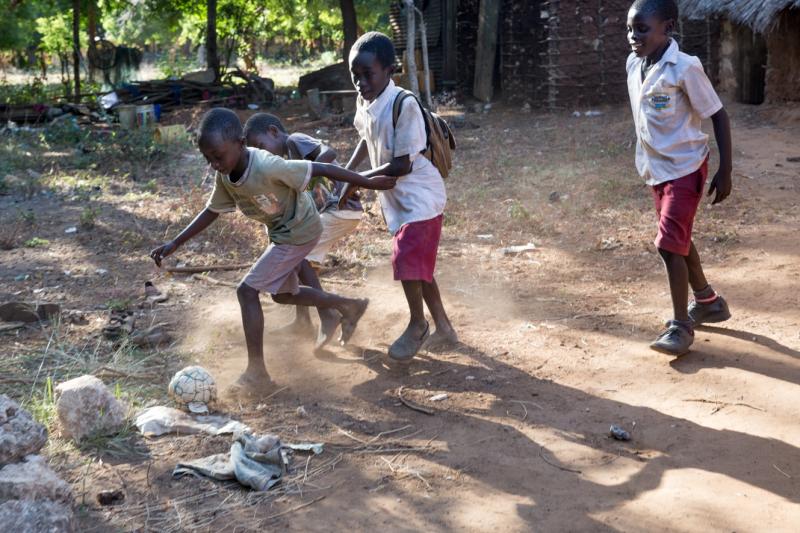 While the pharmaceutical companies aren’t in a position to start picking up the wages of health workers, they are encouraging governments to formerly integrate CHWs into the health system. It’s an advocacy based on research, which shows that for every £1 that’s put into training a CHW, the country receives £9 back from having a healthier population that can go to school, get a job and make a real contribution.

The WHO estimates that almost a quarter of NCD-related deaths could be prevented through healthier lifestyles and environments, and CHWs are instrumental in raising awareness of aggravating factors such as unhealthy diets, lack of exercise, tobacco use and alcohol consumption.

In terms of disease management, Amref trains CHWs to recognise the signs and symptoms of NCDs, meaning they can refer people to the nearest health facility for diagnosis and treatment. After diagnosis, CHWs help individuals to manage their conditions by ensuring they take their medication, go for regular check-ups, join support groups, and make changes to their diet and lifestyle.

In Kenya, for instance, Amref has partnered with GSK, AstraZeneca and the Ministry of Health to address NCDs and infectious diseases through the training of frontline health workers. “We have seen tremendous value and impact through these partnerships,” says Longley.

Technology is also playing a key role in efforts to train CHWs. Most health workers own a smartphone, enabling them to connect to the internet and access training and important medical information.

Several pharmaceutical companies are involved with Amref’s LEAP programme, an interactive mobile learning solution that has helped to train over 6,000 CHWs, while more than 600,000 households have received important health education, basic first aid and referral services via the platform. 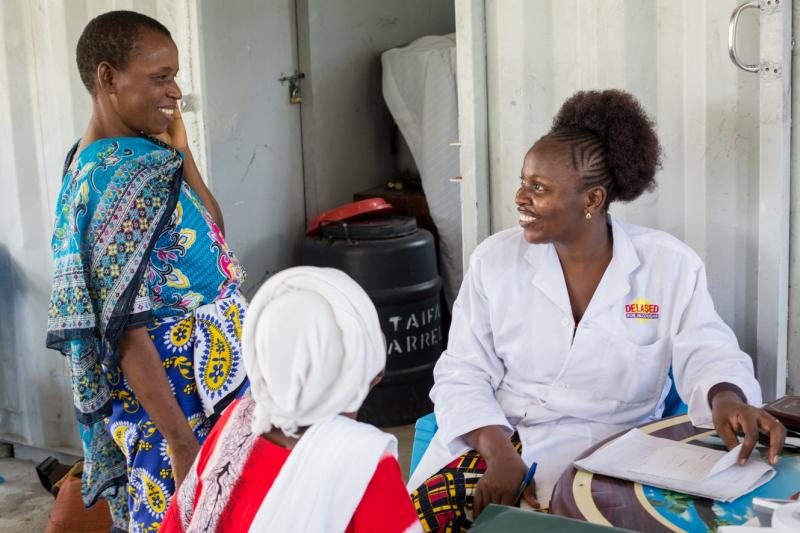 Recognising that the mortality rate for diseases such as cancer remains high across sub-Saharan Africa, Takeda has partnered with Amref and the Kenya Hospice and Palliative Care Association (KEHPCA) to convert information on palliative care into e- and m-learning to train CHWs using LEAP.

The Novartis Foundation has also pioneered a telemedicine programme in Ghana that allows CHWs to connect with specialist health professionals using mobile technology and a 24-hour teleconsultation centre. The coaching they receive from doctors, nurses and midwives strengthens their capabilities and helps avoid unnecessary referrals, which cuts costs and wasted visits by patients. Six centres have now opened, covering around six million people, with national coverage expected to be achieved in 2019.

The Novartis Foundation is also taking the fight against NCDs into urban areas with its Better Hearts Better Cities initiative, which is currently being piloted in three cities, Sao Paulo in Brazil, the Senegalese capital Dakar, and Ulaanbaatar in Mongolia.

As a pharmaceutical company, we acknowledge that solutions need to go beyond the pill

People living in cities are often more prone to NCD triggers such as poor diet and air quality, as well as healthcare systems that often can’t keep up with rapid population growth.

Better Hearts Better Cities is taking a multisector approach, addressing hypertension and its underlying risk factors in a sustainable way, and at scale. This involves building a network of partners, reaching beyond the health sector to include digital and telecommunication organisations, to food suppliers, employers and social enterprises.

By the end of the year, the project will have reached one million people, with the results forming a blueprint for managing and preventing NCDs in other cities. 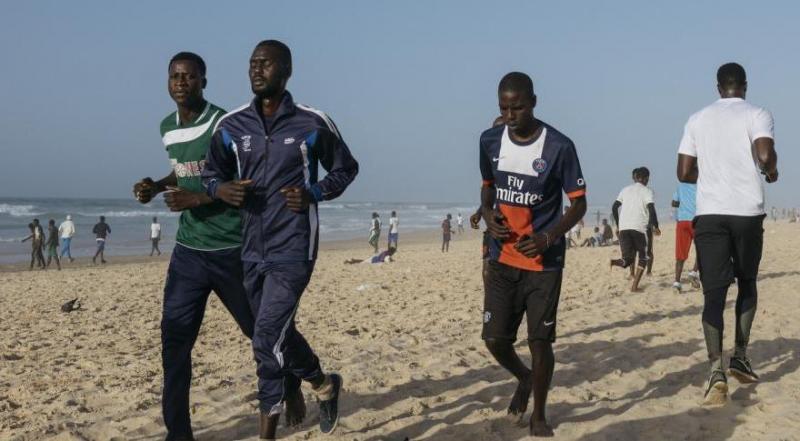 Jogging on a Dakar beach as part of the Better Hearts Better Cities project. (Credit: Novartis)

Better co-ordination of efforts across all types of frontline health worker programmes, whether in NCDs or infectious disease, is also crucial, says Burnaby. “The whole development space is just littered with lots of people trying to do the right thing but sometimes treading on each other’s toes and then sometimes missing something altogether.”

As a result, pharmaceutical companies are working with the Gates Foundation’s CEO Roundtable to improve efficiency and reduce duplication of investment in health worker training.

Such collaborations will be crucial going forward, says Ole-MoiYoi: “As a pharmaceutical company, we acknowledge that solutions need to go beyond the pill, as any medicine is only as good as the system that delivers it. In order to ensure maximum impact, we need to work with public and private partners to raise awareness and strengthen healthcare systems and capabilities, including training of healthcare personnel to diagnose and treat NCDs.”

This article is part of the in-depth Partnering for Health briefing. See also: