A new survey of salaries indicates that while CR professionals’ pay may have stagnated, job satisfaction remains high

Back in 2007, despite plenty of anecdotal evidence – and gossip – there was little hard data on the salary levels of corporate responsibility practitioners in the UK and even less was known about their job titles, educational qualifications, day-to-day activities and the kind of budgets they worked with. It was against this background that Acre and Carnstone first discussed the possibility of undertaking a survey of people working in the sector with the aim of providing some answers to these questions.

That 280 people took the time to complete that first survey suggested we might have tapped a nerve, something that was endorsed by the level of interest the survey generated in both the specialist and more general media. We also began to receive emails and calls from practitioners who wanted to know if a “friend’s” salary was in line with what he or she should be getting paid…

Since then, the survey has grown in scope both in terms of its reach (we went global in 2010 and had 1,200 responses in 2014) and the areas it covers (questions on job satisfaction, job security and the competencies required to break into the sector and be effective have been added along the way). The level of interest remains high and we are increasingly being asked to provide more granular data that gives the breakdown for total remuneration (salary and bonus) by industrial sector. 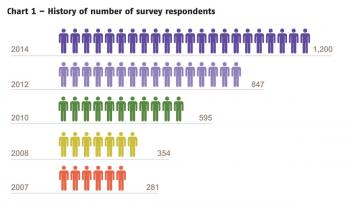 From the outset, we wanted to make the survey more than just a series of graphs and charts with some analysis thrown in and, hence, we’ve always included comments on different aspects of the results each year from a wide range of senior practitioners. For their support over the years we are deeply grateful.
While each survey throws up particular findings and insights certain themes have remained constant.

The first – and this would be worth an article in its own right – is the under-representation of women in senior management positions both in-house and in consultancies. The early surveys also suggested that women were more likely to be found in certain areas of CR activity than others.

As one of our commentators in 2009 put it: “So, men stride around climate change in big boots saving the planet, while women stay home, communicate with people, do the ‘soft’ community stuff and write about it afterwards. You couldn’t make it up.”

Because of the direct correlation between seniority and remuneration it’s not surprising, therefore, that women are paid less than men.

Now, there may well be a number of reasons why that was and remains the case – including the relative small number of women in those industrial sectors where remuneration is highest. It may also be true that CR and sustainability merely reflects wider societal and employment trends. However, it does seem incongruous that a sector whose practitioners often promote the benefits of diversity has failed, thus far, to put its own house in order.

It’s also important to note – and, again, this may go against the popular view – that consultants are less likely to be paid a bonus (just over half of consultants received nothing versus 35% in-house).

Moreover, in every region, consultants’ bonuses are lower on average – for example, in the UK consultants received £8,500 on average (versus £11,000 in-house) and £5,000 in North America (versus £23,000). In chart 3, average bonuses for consultants are lower across all of the salary bands apart from the lowest and highest with the latter, one suspects, including a fair number of people with an equity stake in the business.

This raises a number of issues. Given that consultants “eat what they kill” it seems fair to suggest that the disparity in remuneration is evidence of too many chasing too little work (and therefore depressing rates) and/or a failure by consultants to demonstrate the value of their services and advice.

Whilst money isn’t everything – variety of work and less bureaucracy are frequently cited as being chief among the delights of a consultant’s life – the question arises as to whether the allure of corporate salaries and bonuses (and superior benefits packages) will make it more difficult for consultants to attract and retain employees with the right skills and experience.

The third theme we’ve identified relates to the high level of academic qualifications possessed by people working in the sector. The latest results reveal that just over 70% have a first degree, while 60% have a master’s or doctorate – a 14% increase on 2007.

Of those with postgraduate degrees, over two-thirds had studied for a qualification that was CR or sustainability-related. Conversely, less than one in five of respondents claimed to have a professional qualification in CR or sustainability. In part, this reflects the difficulty of developing a “gold standard” qualification – similar to those in human resources, management or marketing for example – that encompasses the different roles found in the sector.

The increasing numbers of practitioners with postgraduate degrees is a powerful indicator of the sector’s growing maturity. This specialist knowledge is vital but needs to be allied with an understanding of how businesses operate if it is to be deployed effectively. In seeking to answer the question of what should they know of CR, the Institute of Corporate Responsibility and Sustainability (launching in July) has developed a competency framework for practitioners that outlines the skills and behaviours required.

To test its validity and utility, this year’s survey asked respondents to select the competences required to secure a first job in the sector and those needed by established practitioners. For in-house respondents the top selection was “engage with stakeholders” while consultants chose “plan and develop strategy”. Particularly noteworthy was the fact that only around 1% of respondents suggested alternative skills and behaviour to those contained within the framework. 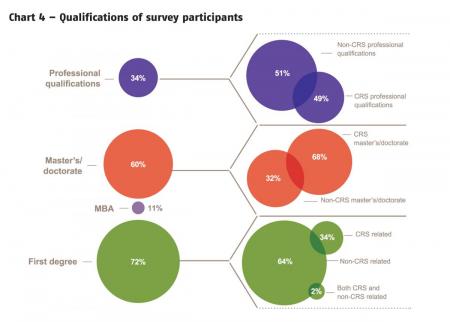 A further theme is the very high level of job satisfaction expressed by participants – 52% satisfied and 28% very satisfied – while 93% would recommend a career in the sector. Any human resources director, regardless of sector, would be delighted if these levels were replicated in their own organisation’s annual employee survey. No doubt these figures reflect the personal interest in the subject matter and emotional capital individuals invest in their roles. The challenge for employers going forward is to maintain this level of commitment.

Paul Burke is a senior partner at Carnstone Partners LLP, a specialist management consultancy that advises clients on the full range of CR and sustainability issues. The CR and Sustainability Salary Survey is a collaboration better Acre, Carnstone and Flag. A full copy of the results can be downloaded from crsalarysurvey.com

Make sustainable innovation add to your bottom line. 15+ CEOs and C-Suite from leading multinationals plus heads of CSR will discuss the future of sustainability

SSE, Persimmon and BT 'best plcs for building an i...
Rise of the sewbots: Asian factory workers feel chill w...
CEO pay: Would a £1m pay-cut really hurt?
Why curiosity and collaboration are the critical skills...
comments powered by Disqus

2 in 3 respondents state that addressing #scope3 emissions is the most challenging aspect to meeting #netzero emiss… https://t.co/afDvV12EXk

ESG Watch: IEA report calling for end to new oil and gas puts wind in the sails of investors