The Intergovernmental Panel on Climate Change (IPCC) assesses that we have 11 years to prevent irreversible damage from climate change). Against that background, governments, companies, sectors and industries, and individuals must all challenge the status quo and change to a net-zero way of living.

Realising that the role for commercial lawyers in tackling the climate crisis has been largely overlooked, Matt Gingell, general counsel at at Oxygen House Group, started The Chancery Lane Project (TCLP) to mobilise the legal profession to help bring about the transition to net-zero and protect the economy and community from the unavoidable impacts of a changing climate. TCLP, which is independent of any professional body or practice and is politically neutral, brings legal professionals together to collaborate and rewrite contracts and laws that will support communities and businesses in fighting climate change and achieving net-zero carbon emissions.

"We do not profess to have all the answers to the climate crisis, and we are not trying to own the solutions,” Gingell says. “From the very beginning, the project has not been about individual lawyers or firms, but rather the collective effort of the entire legal profession to make a positive impact. We are, with the best of intentions, using our legal skills to accelerate solutions to climate change in a politically and professionally neutral manner."

In February, TCLP published a Climate Contract Playbook. It includes 16 free-to-use precedent clauses that help lawyers, businesses and communities to have a positive impact on the climate crisis through environmentally conscious drafting. The clauses have each been given a child’s name to ensure that those drafting and using them are connected to the next generation for whom the changes are so important. The clauses cover a wide variety of issues including:

• Introducing an exemption to data protection rules to allow pooling and processing of personal data where that would help find solutions to existing climate change issues;
• Amending the Landlord and Tenant Act 1954 to require all new business leases to include green lease clauses; and
• Introducing a class of environmental crime where parent companies would be liable for environmental damage caused by their overseas subsidiaries unless the directors can show adequate procedures were in place to identify, avoid and mitigate such impacts. 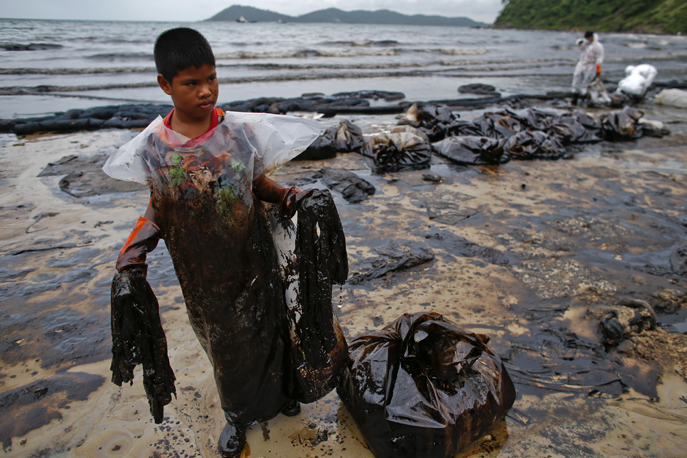 Under the Green Paper of Model Laws, companies would be liable for environmental damage caused by overseas subsidiaries. (Credit: Athit Perawongmetha/Reuters)

TCLP knows that the laws and contracts drafted through this project are not enough on their own to address climate change. Ellie Mulholland is a lawyer at MinterEllison, director of the Commonwealth Climate and Law Initiative, and a member of the TCLP steering group. She says these clauses and laws must be "taken up and used, negotiated, refined, applied to the unique circumstances of the client, project or jurisdiction, and agreed or passed" so that they are "brought to life and into contracts to deliver real-world impact".

TCLP has clearly tapped a legal need in the legal and CSR communities as the playbook and green book have been downloaded nearly 5,000 times since they were launched and downloads have been by organisations across the globe including in the US and Australia as well as the UK.

They are the result of a climate hackathon at Practical Law's Canary Wharf offices In November 2019, attended by a pioneering group of over 120 lawyers from specialisms and sectors across the profession.

They were published in February 2020 at an event hosted by Airbnb in London. At the event, funding to allow the TCLP team to scale up its work was announced by Ilmi Granoff of ClimateWorks. My colleague Katherine Long, senior director at Practical Law, an online legal know-how service owned by Thomson Reuters, also announced that Practical Law would host the 2020 hackathon in November this year. Many attendees made personal pledges ranging from offers to hold mini-hackathons to commitments to add climate wording to their firm's precedents.

Since the launch of the playbook and green book, the world has been overtaken by another crisis and social distancing measures announced by governments around the world have made it impossible (in the near future) to hold further physical hackathons to replicate the success of the one hosted by Practical Law.

The team at TCLP has responded swiftly by moving its drafting activities online and kicking off a project to draft some key climate change definitions to support the various clauses and laws that TCLP volunteers are working on. I am leading this project, which is key to ensuring the consistent use of concepts and terms as the legal world develops new market standards and solutions to tackle climate change.

For more information on TCLP, or to get involved, go to The Chancery Lane Project: get involved. Becky Clissman is a senior editor in the environment team at Practical Law, which is owned by Thomson Reuters. Thomson Reuters also owns Reuters Events, which publishes Ethical Corporation magazine