Eyes in the skies: The push to beef up surveillance of palm oil deforestation

Terry Slavin reports on how brands like Nestlé, Mars, PepsiCo and Unilever are turning to tech and partners on the ground to monitor deforestation risk around the mills that supply them

One area of stepped up activity in the battle against palm oil deforestation is in surveillance and monitoring, in the wake of a move by palm oil traders Wilmar, IOI Loders Croklaan, Musim Mas, Golden Agri-Resources and Apical to publish a list of all the mills that supply them.

In 2018, Nestlé became the first brand to deploy a satellite-based monitoring system, Earthworm Foundation’s Starling service, to monitor 100% of the company’s palm oil supply chain, both certified and non-certified, around the globe. The system, at 1.5m resolution, also uses radar to allow small changes in tree coverage to be clearly visible, even through cloud cover.

Mars and Unilever, meanwhile, are reported to be getting near-real time information about deforestation events around the mills that supply them from Aidenvironment, which is using detailed satellite and radar imagery from Sentinel, Landsat, SPOT, Ikonos and other sources. It is also using drones in the field to capture pictures and video, and doing field investigations on the ground.

While those systems are supplying alerts only to brands, in a bid to show transparency, last October saw the launch of the Radar Alerts for Detecting Deforestation (RADD) system, a partnership between Nestlé, PepsiCo, Mondelēz International and Unilever; traders Bunge, Cargill and Wilmar; and palm oil producers Golden Agri-Resources (GAR), Musim Mas, and Sime Darby.

Malaysia’s Sime Darby, the world’s biggest producer of sustainable palm oil, is also keen to stress the open and collaborative nature of its Crosscheck online tool, launched last year, which allows anyone to trace the source of its palm oil supply to the mill level, which are supplied by thousands of plantations and hundreds of thousands of smallholders. 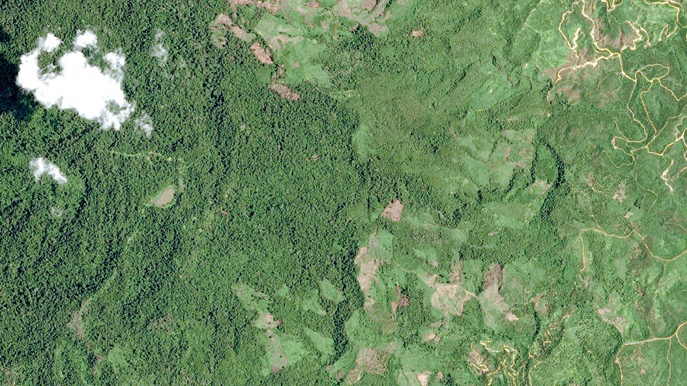 Developed with Conservation International and WRI, the tool features a risk map that shows a 50km radius around all the mills that supply Sime Darby’s refineries, highlighting areas of risk to forests, animal habitats and biodiversity, with links to satellite maps showing any evidence of deforestation on the ground.

Complaints can be lodged on the platform, and the follow up will also be transparent, the company said.

Haris Arshad, managing director of Sime Darby Oils, told Ethical Corporation that the company, which has had a no-deforestation policy in place since 2014, decided to create the tool because it owns only 65 of the 909  mills that feed into its refineries.

This is about showing provenance, ensuring that the things you think are happening on the ground are actually happening

But it wants the entire palm oil industry to use the platform and add information about mills, so the industry can work together to identify and act on deforestation and human rights risk.

“Many producers like us want to develop their own system, but in our view, that’s competing quite wastefully, because we are all trying to achieve the same thing, a clean palm oil supply chain.”

From January this year, it has strengthened its no deforestation, no peat and no exploitation (NDPE) policies, and will suspend suppliers if they fail to come up with a time-bound plan to rectify or remediate, and refuse to submit to external auditing, the company said.

Phil Aikman, campaign director of US-based Mighty Earth, said while he was initially excited by Crosscheck, on closer inspection he was less impressed. He describes Crosscheck as a good visualisation tool, but said it needs to go much further than risk-mapping. “All that Crosscheck does is provide traceability to the mill, not to the plantation.”

Mighty Earth has a rapid response monitoring system, which covers more than 3,500 oil palm concessions in Indonesia and Malaysia, and publishes a monthly league table of how 27 palm oil traders and producers respond to cases of deforestation and peat development it identifies. Aikman pointed out that Sime Darby is only middle of the pack, far behind leader GAR, which is the only company providing traceability to its plantations.

Most companies are only doing the bare minimum on transparency, by publishing mill lists 'from a year ago or even longer'

GAR was top scorer among palm oil producers on CDP's assessment of corporate reporting on deforestation risk, earning an A-, while Sime Darby earned a C, Musim Mas a B and Wilmar B-.

Aikman said most companies are only doing the bare minimum on transparency by publishing mill lists that are “from a year ago or even longer”.

While Nestlé wins praise for its monitoring efforts, and for publishing a list of suppliers, including those that it has dropped for non-compliance, Robin Averbeck, who leads on palm oil for Rainforest Action Network, says: “We’ve continued to see significant gaps in its performance, with no systematic approach to implementing and verifying.”

Similarly, she said, the RADD system is in its infancy. “We don’t know how effective it will be.”

Will 2023 be a watershed moment for corporates on addre...
The five-year search for the right recipe to save fores...
Brands failed to meet promises to protect forests. We c...
Beef and dairy farms pushed to innovate to tackle metha...
comments powered by Disqus