ESG Watch: IEA report calling for end to new oil and gas puts wind in the sails of investors

A new report from the International Energy Agency calling for an immediate halt to new oil and gas developments was its strongest warning yet of the need for a radical shift towards renewable energy to enable the world to meet its 1.5C target.

In its Net Zero by 2050 roadmap for the global energy sector, the IEA calls for no less than “a total transformation of how energy is produced, transported and used globally” in order to give the world an even chance of escaping the worst impacts of climate change.

The report, which was requested by COP26 host, the UK, to inform the high-level climate negotiations in Glasgow later this year, sets out more than 400 milestones, including “from today, no investment in new fossil fuel supply projects, and no further final investment decisions for new unabated coal plants. By 2035, there are no sales of new internal combustion engine passenger cars, and by 2040, the global electricity sector has already reached net-zero emissions.”

The landmark report is a hugely significant change in emphasis from a body whose members account for a large proportion of fossil fuel demand and which has historically downplayed the potential of renewable energy.

It will provide a big boost to investors, which this month have continued to make significant progress in getting companies to act on ESG-related issues in the oil and gas sector.

Activist group Follow This gained the votes of more than a fifth of shareholders at BP’s AGM for a resolution asking it to set a Paris-aligned climate strategy, and support for a similar resolution at Shell more than doubled to 30% from last year. 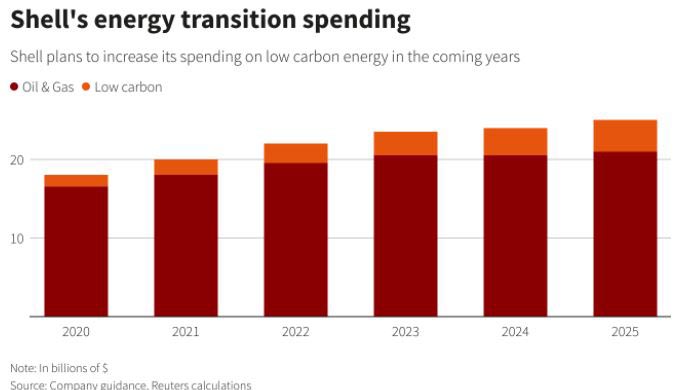 At the same time, almost 89% of shareholders backed the company’s own energy transition vision, which is based on reducing energy intensity rather than absolute emissions. Under the plan, at least 75% of Shell’s spending will continue to go towards oil and gas through to 2025, though it will also grow its renewables and low-carbon business and offset emissions through carbon capture technologies and fighting deforestation.

While the company hailed the results as vindication for its strategy, a growing body of investors expect to see more ambitious action in future, chiefly short- and medium-term targets to cut emissions on an absolute basis.

Reuters reports that Adam Matthews, director of ethics and engagement for the Church of England Pensions Board, told the AGM that if Shell doesn't meet its 2023 targets the fund would divest its stake in Shell, for example.

Barclays financed another US$27 billion to fossil fuels in 2020, increased funding for fracking, tar sands and Arctic oil by 32%

And in the U.S., a majority of shareholders at ConocoPhillips and Phillips66 voted for resolutions calling for reduction targets for all emissions, a major landmark for investor pressure on climate change in the U.S.

All this sets the scene for ExxonMobil’s AGM at the end of the month, which could also see a significant vote against the company – Legal & General, the biggest UK asset manager and owner of almost $1bn of Exxon shares, said it will vote with Engine No 1, an activist hedge fund seeking four seats on the ExxonMobil board and a clearer climate strategy which, like Shell’s, is based on reducing carbon intensity rather than absolute emissions. And three investor proxy groups, ISS, PIRC and Glass Lewis have recommended support for some or all of the fund’s choices.

Coal has been another focus for ESG investors in the past couple of weeks. Vienna Insurance Group, which had come under fire for its support of coal power plants in the Czech Republic and elsewhere, has updated its coal policy to say that “if no credible exit plan can be presented, the insurance contract must be terminated as soon as possible”. 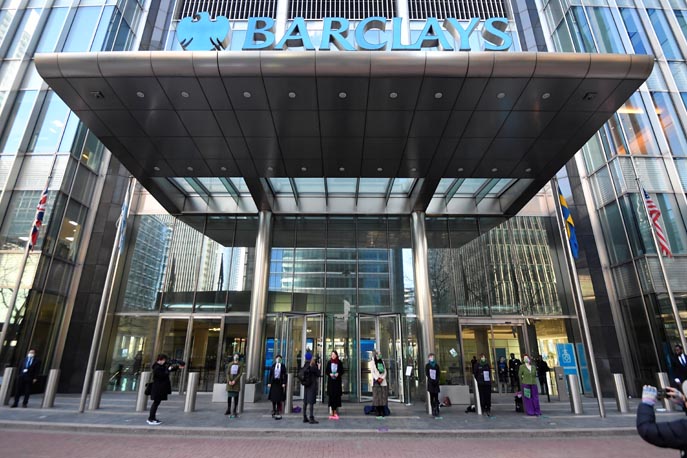 Meanwhile, Standard Chartered fell victim to a spoof by youth climate activists Fridays for Future, which released a press release announcing Standard Chartered’s intention to end all support for coal in 2021 and all fossil fuel infrastructure by 2023 – actions, they said, that would be consistent with the bank’s stated support for the Paris Agreement.

The hoax followed environmental group Market Forces putting the bank on notice that it will file a resolution if its policies don’t improve, adding that the bank recently lent $400m to Indonesian coal miner Adaro Energy even though “its own internal calculations show that Adaro’s contribution to global warming was plainly incompatible with the Paris accord”.

However, a Market Forces resolution calling on Barclays bank to phase out funding for fossil fuels gained just 14% support. Adam McGibbon, UK campaign lead at Market Forces, said: “This result is a major concern, as after last year’s strong investor vote for greater climate action, Barclays financed another US$27 billion to fossil fuels in 2020, increased funding for fracking, tar sands and Arctic oil by 32% in the same time period, and remains the biggest UK funder of the global coal industry.”

Away from fossil fuels, new research by Ceres and FAIRR shows that fast food giants are accelerating their climate commitments in the face of growing pressure from an $11bn investor coalition and consumers to decarbonise their supply chains. Five of the biggest fast-food chains (McDonald’s, Yum! Brands, Chipotle, Domino’s and Wendy’s) have either set, or stated they will set, aggressive science-based targets to reduce their emissions.

UK supermarket Tesco has also agreed to disclose the proportion of its sales linked to healthy products and to increase those sales, in response to shareholder pressure, while in the U.S., chemicals group DuPont saw a proposal by As You Sow asking it to report on spills of plastic pellets, supported by more than four-fifths of investors.

All of this activity continues to attract strong consumer and investor support, backed by a growing body of research that highlights the importance of investors considering ESG issues in their analysis.

Consumers continue to back ESG strategies, with UK group Make My Money Matter reporting that 61% of UK pension holders want their retirement savings to help fight climate change and half of all pension holders saying they would switch their pension if they knew it was funding oil and gas companies, arms production, deforestation or had links to child labour. Yet 63% said they had no idea where their pension is invested.

PwC reported that ESG is rising up the agenda for private equity firms, with 91% concerned about climate risk – although almost half of them have still not acted to understand the climate risk exposure of their portfolios.

Meanwhile, EY reports that ESG factors are becoming increasingly important drivers for corporate divestment activity, with 46% of sellers saying they had a direct influence on their decisions to divest, but almost double this (84%) citing ESG as a factor in Asia, compared with just 14% in the Americas.

New analysis from Planet Tracker highlights how ESG research is also becoming increasingly granular and identifying knowledge gaps that can hold back ESG investment and analysis. In the textiles sector, “wet processing” companies rely heavily on water, chemicals and heat to treat and dye fabrics, but they are failing to disclose how they are managing their significant environmental footprint, the group says.

Another niche tool comes from OpenInvest, an ESG investment platform that measures publicly traded companies’ involvement in the humane treatment of domesticated and captive animals. “Recently, the explosive rise of plant-based proteins has cast a spotlight on inhumane practices in animal farming, and consumer sentiment is leading companies across all industries to re-evaluate the role of animals in their business activities and external advocacy,” the group says.

OpenInvest said it would release the names of notable companies, including Airbnb, Kellogg’s, and Marks & Spencer, that take an active role in the humane treatment of animals, while it flags up Amazon/Whole Foods Market, Estée Lauder and Johnson & Johnson as companies that do not make animal welfare a priority in their operations. 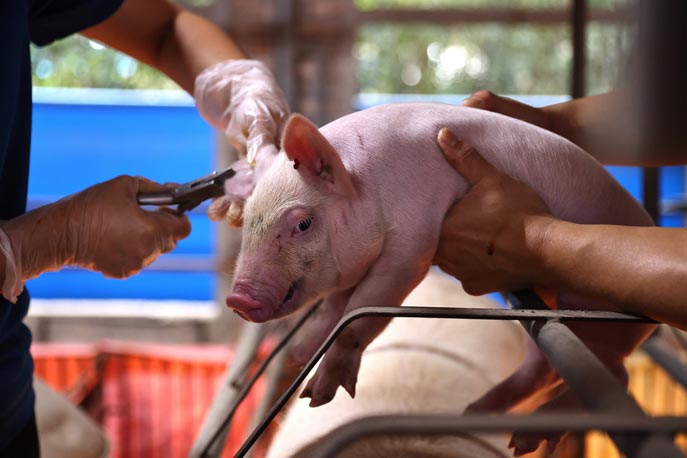 The breadth and depth of the ESG market continues to increase, as more products gain ESG equivalents or replacements. Amundi has expanded its ESG ETF range with the transition of six fixed-income products into ESG exposure, while Lombard Odier Investment Managers has launched four “Target Net Zero” Paris-aligned fixed income and equity strategies.

Aviva Investors has launched a Climate Transition Global Credit Fund, which “aims to identify and invest in companies offering goods and services for climate change mitigation and those best-placed to transition to a warmer, lower-carbon world”, Aviva says. It will invest not just in companies with obvious green credentials but also those “transition-oriented companies with low decarbonisation and physical impact risk”.

This article is part of this month’s web-only Sustainable Business Review. See also: