Russia’s unique history – its many decades of communist rule – has bequeathed it a powerful legacy of corporate social responsibility by companies. So strong was state companies’ historic role in providing social services that this has sometimes trumped both economic and environmental concerns.

More recently, the demonstrations that followed elections – which were subject to accusations of ballot rigging – may lead to more social unrest over the coming months. Companies will certainly have a role to play in developing social cohesion.

The history of the modern corporation is shorter in Russia than in many western nations. But before perestroika in the 1990s, the USSR’s system of state-owned and state-controlled enterprises had its own understanding of social responsibility.

“In some ways, the USSR was the ultimate word in CSR, where state enterprises paternalistically supported local cities and communities,” says Brook Horowitz, director of regions and business standards at the International Business Leaders Forum in London. He says the Soviet economic system was far more socially orientated than what has followed. “The challenge for modern day Russia and other post-Soviet states is to discover the optimal balance between state control and private enterprise – actually a problem similar to that facing the west, post financial crisis.”

However, while large and small Russian enterprises of the past were compelled to take on social obligations and functions, environmental questions (and even at times economic sustainability) were left by the wayside.

The Baikalsk Pulp & Paper Mill (BPPM) near Irkutsk, Siberia, provides a microcosm, both of Russian companies’ social responsibility history and of the problems some companies have in transitioning to a more modern and rounded form of responsibility.

The BPPM plant was the town of Baikal’s single engine – at its peak nearly all of the town’s budget for its 16,000 residents came from the paper mill, and more than a fifth of the population was directly employed there.

Unexposed to global competition or outside influence, BPPM was an outmoded enterprise when Mikhail Gorbachev began restructuring the Russian economy in the late 1980s. During the asset-grab of the 1990s, BPPM eventually came under the ownership of an investment group controlled by oligarch Oleg Deripaska.

Thousands of enterprises like BPPM were privatised under Gorbachev and later Boris Yeltsin, and together with those that remained under state control, were run with little or no knowledge of how private markets worked.

BPPM was a case in point – with no updating of mill equipment either for ecological or economic reasons, over time the plant’s output of bleached cellulose was not competitive on the open market. BPPM used chlorine to bleach the cellulose and discharged waste directly into nearby Lake Baikal, but activists were unsuccessful in their fight to get the plant closed.

As the 1990s came to a close, the economic turbulence that sometimes teetered Russia towards collapse, was eased by rising international oil and natural gas prices, as well as outside demand for Russia’s abundant precious metals and agricultural resources.

This evolution of the former USSR into a natural-resource-based economy has had both positive and not so salutary effects on the development of domestic corporate responsibility issues. There’s a close correlation between companies’ environmental responsibility and their integration in the international economy. With low integration, Russia has a corresponding lower awareness and action around environmental protection. In addition, extractive and basic industries have seldom been known for their environmental and responsibility innovation.

The continued authoritarian control of the state under Vladimir Putin and his hand-picked successor Medvedev has also hindered development of a responsible business agenda. In fact, Alexey Kostin of the Corporate Social Responsibility Russian Centre says the government paid more attention to a national definition of social responsibility and sustainability issues during Yeltsin’s tenure.

“In Russia a viable, agreed-upon definition for CSR does not exist yet – the government does not want to form and announce its position and policy in this field,” Kostin says, “and the explanation is very simple. ‘Why should we?’ they conveniently think, if CSR is absolutely a corporate issue.”

It took until 2008 for the Federal Service for Natural Resources, a state agency, to finally file a lawsuit against BPPM for environmental damage. Putin, president at the time, himself ordered BPPM to put a closed-loop wastewater system in place.

Closed, but not for long

The mill temporarily closed, putting 2,000 people immediately out of work, and threatening the social stability of the one-industry town. BPPM’s owners then announced in 2009 that the plant was economically unsustainable and would not be reopened. Environmentalists were overjoyed that the direct threat to the lake’s clear waters was halted.

The town of Baikalsk, however, socially in a shambles, was bereft of its biggest employer and service provider. Unexpectedly, in 2010, Putin, by then prime minister, announced changes in legislation that let BPPM (by then half state-owned) re-open, and begin re-polluting the lake, which in 1996 had become a world heritage site.

Alexey Kostin says that while state companies influenced by international competition or export needs are “quite pliable” to new responsible business technologies and corporate responsibility principles, companies such as BPPM remain for the foreseeable future untouched and unreachable.

To Andrey Petrov of Greenpeace Russia, BPPM could never fit any definition of sustainable.

“For Greenpeace the only possible solution is the closing of BPPM,” he says. “The price of Lake Baikal is much higher than the price of cellulose. There is no equipment that can significantly minimise the mill influence on the lake.”

Yet BPPM, for all its weaknesses, still supports a town, fulfilling (if only badly) needed social responsibilities. It is a salient example of the difficulty Russian companies face in adapting to a different view of what sustainability and corporate social responsibility really mean. 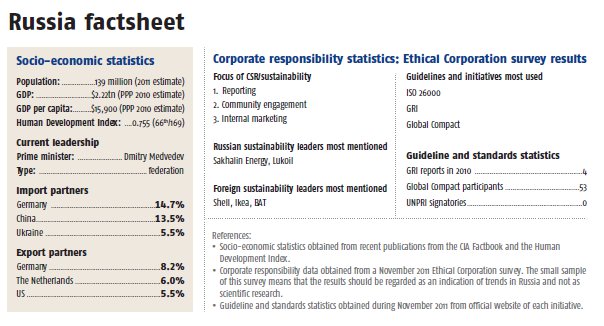 Socio-economic statistics obtained from recent publications from the CIA Factbook and the Human Development Index.

Corporate responsibility data obtained from a November 2011 Ethical Corporation survey. The small sample of this survey means that the results should be regarded as an indication of trends in Russia and not as scientific research.

Guideline and standards statistics obtained during November 2011 from official website of each initiative.

April Streeter is a writer specialising in sustainability since 1998. Formerly based in Sweden, where she covered Scandinavia for Windpower Monthly, she now lives in Portland, Oregon, and is a blogger for Tree Hugger and The Huffington Post.

This briefing has been written by One Stone, a global team offering sustainability consultancy and communications expertise, which has more than two decades of experience working with multinational companies. One Stone’s partners and associates are based in Stockholm, Edinburgh, Sydney, Portland and Washington DC.