Mark Hillsdon talks to Heineken, Carlsberg and Diageo about how they collaborating on safeguarding watershed health, and focusing on circular economy solutions

Operating in some of the most water-stressed areas of the world poses some severe problems for the drinks and beverage industry, which relies so heavily on a consistent supply of water. But to tap the local watershed, businesses need to maintain a licence to operate, ensure the goodwill of local people and the support of scrutinising NGOs, while at the same time meeting local rules and regulations on issues such as waste water.

While 10 years ago it would have been difficult to make a strong business case for water efficiency, a decade on there are few more pressing issues for the sector than protecting this precious resource.

In the world of brewing, water efficiency is often talked about in terms of the ratio of water used to make a pint of beer. Small independents may still look at a ratio of 10:1, while the world’s mega-breweries are achieving 4:1, with some edging towards the 3:1 mark.

“We are all trying to drive down the water use in our breweries,” says Willem De Jonge, Heineken’s director of global sustainable development. However, he adds, when the water used to grow crops such as hops and barley is taken into account, the figure is closer to 3,000 litres per pint.

“We should not close our eyes to this part of the water footprint,” he says, hoping that “we will move away from the theoretical race to ever-lower efficiency figures amongst all the players because in the end … investing in efficiency is often not the most effective [way to achieve] watershed health.” 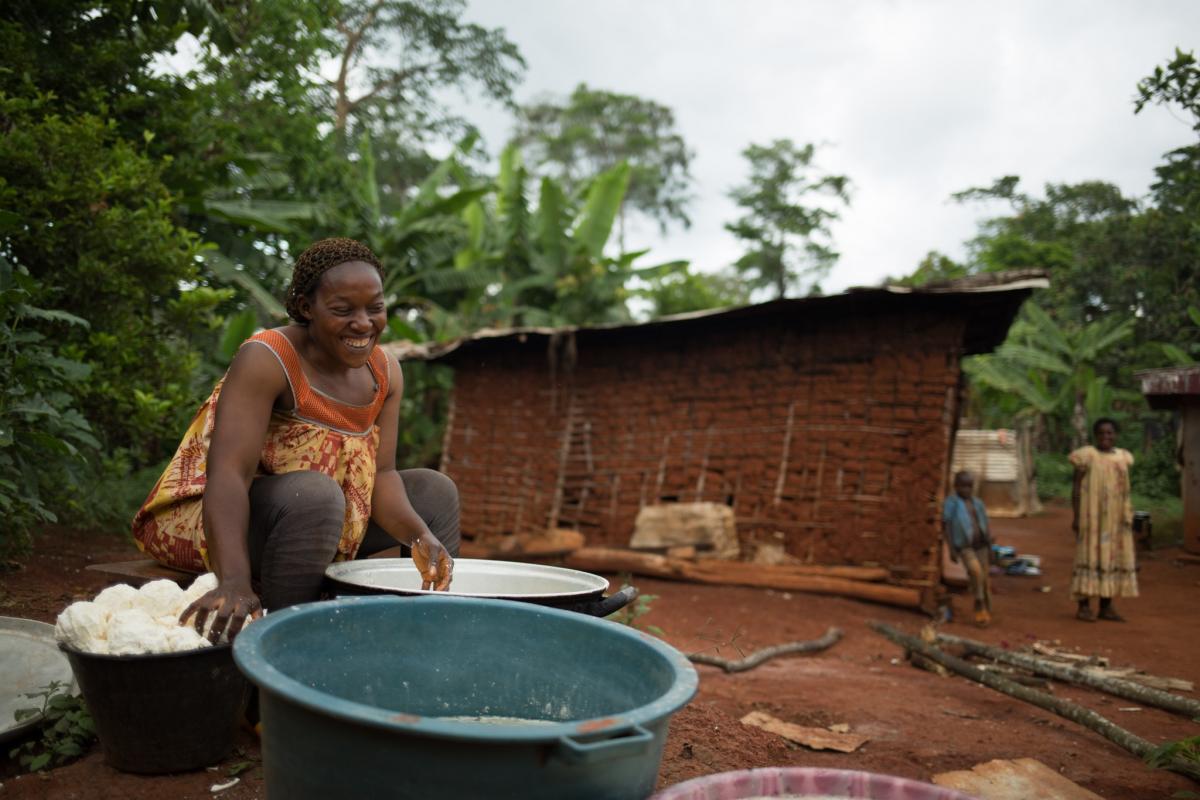 Early next year, Heineken is set to launch a new water strategy. It represents a subtle shift in direction rather than a wholesale change, explains De Jonge, and focuses on watersheds around its operations in water-stressed areas such as Mexico and Spain.

“Each solution must be specific to the nature of water stress in that particular area, and take into account cost-effectiveness and potential impact,” he explains. “Water is very local and context-based … That is an important difference to, say, climate, because climate is global. If you emit in Ghana, or Indonesia or the Netherlands, it doesn't matter, it all ends up in the same atmosphere.”

The strategy will still include a focus on greater efficiency within breweries, alongside better re-use of water, and greater collaboration around watershed management, with the ultimate aim to improve watershed health.

Water balancing is something you control. But seeking to collaborate with other water users in the watershed is more difficult

Previously, water balancing, which uses various ways to level out the amount of water that a company extracts from a watershed, had proved successful, says De Jonge.

In the San Juan watershed in Mexico, for instance, Heineken is working with the Monterrey Metropolitan Water Fund to support reforestation projects, with the aim of balancing over 1 million cubic metres of water by 2020. As well as increasing water retention in the watershed, reforestation helps to reduce soil erosion and restore wetlands, increasing both water quality and biodiversity.

In Spain, the company has partnered with the NGO Commonland to restore three degraded lagoons in the Doñana wetlands, close to its brewery in Sevilla. By improving soil structure and water filtration, and re-planting indigenous trees, the work has exceeded all expectations, and is now balancing more than 1 million cubic metres of water per year, double the initial target. 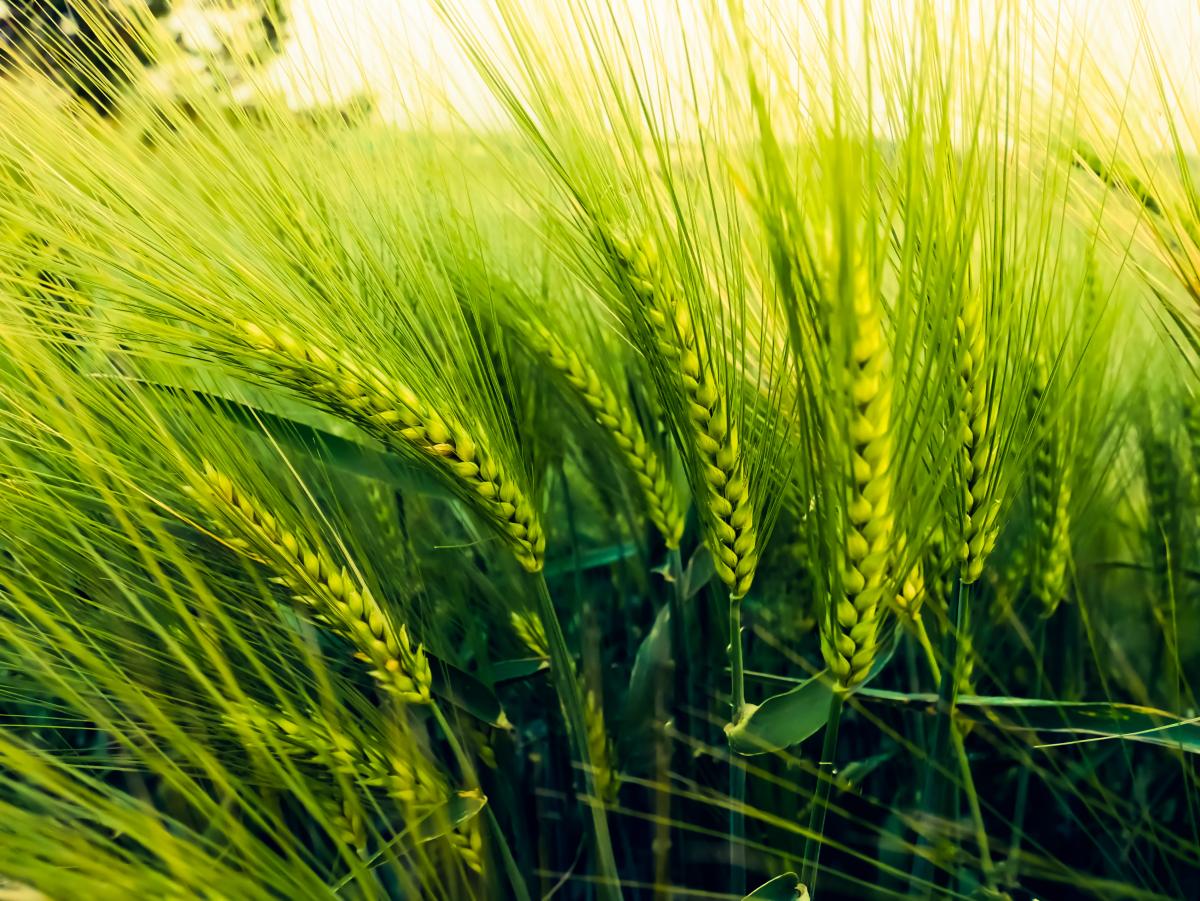 Irrigating crops such as barley can mean a pint of beer uses up 3,000 litres of water. (Credit: sorawit8888/Shutterstock)

Other water balancing initiatives include drip irrigation, the introduction of drought-resistant crops, and water capture using deep wells, which help to replenish the groundwater.

Heineken's new water strategy, however, will move away from just water balancing to more extensive watershed management, which involves creating partnerships with other watershed users, to expand the scope of activities.

The change will not be easy, concedes De Jonge: “[It] is a very big step forward, because water balancing is something you control yourself ... But seeking to collaborate with other water users in the watershed is a different animal, and it will be more difficult.”

Diageo has given water an internal cost, in the same way that some businesses have adopted a shadow price for carbon

The strategy will also see a greater emphasis on re-using water, particularly for irrigating crops. At the moment, treated water is released back into rivers, where it can swiftly leave the watershed, rather than help to replenish it. “Our current commitment is that we will treat it; our future commitment is we will seek to re-use it,” says De Jonge.

At Carlsberg, a key target is to halve water use at all its breweries by 2030. Adam Pawelas, the company’s director of environment and utilities, talks about “moving into a water-restrained economy”. And while he concedes that at one level saving water still equates to saving money, he also believes that “we are moving away from the money discussion to a real resource discussion”.

In 2016, working with the WWF, Carlsberg carried out a water risk assessment of all its 86 majority-owned sites around the world. Alongside physical risks such as water scarcity and flooding, the assessment also considered water quality and reputational risks, and identified 15 sites, mainly in India, China and Vietnam, as high risk. 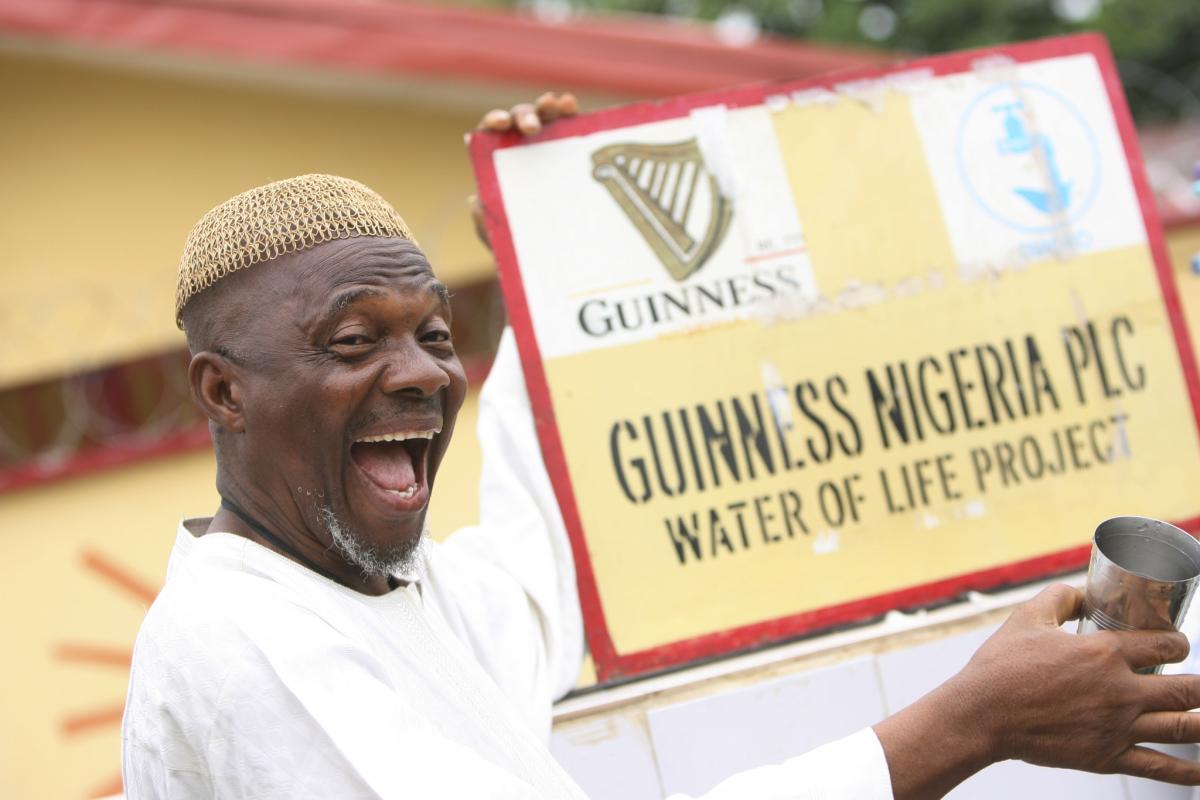 Guinness owner Diageo has committed to return 100% of its wastewater to the environment. (Credit: Diageo)

These are now the focus of the company’s water stewardship activities, which include new water-efficiency technologies and working groups, established with local stakeholders to look at community issues around water supply.

According to Michael Alexander, Diageo’s global head of water, environment, agriculture and sustainability, part of the problem is that the cost of extracting water is too cheap. “Water is under-priced,” he says.

To address this, Diageo has given water an internal cost, in the same way that some businesses have adopted a shadow price for carbon, as a way of incorporating the possible impact of climate change on their investments.

If we're doing a capex proposal and we only looked at the borehole meter cost, then the payback’s not going to look attractive

It’s a methodology that helps to make the vital business case for water investment, and gives Diageo a more realistic understanding of how much it costs to pump, treat and discharge water.

“If we're doing a capex (capital expenditure) proposal for a water-related investment and we only looked at the borehole meter cost, then the payback’s not going to look very attractive and it’s going to be a disincentive to investing,” he explains.

“Whereas if we can plug into that model the full value ... the internal cost of that water ... that will give us a more attractive payback and return and … a more realistic impact of our investment.” 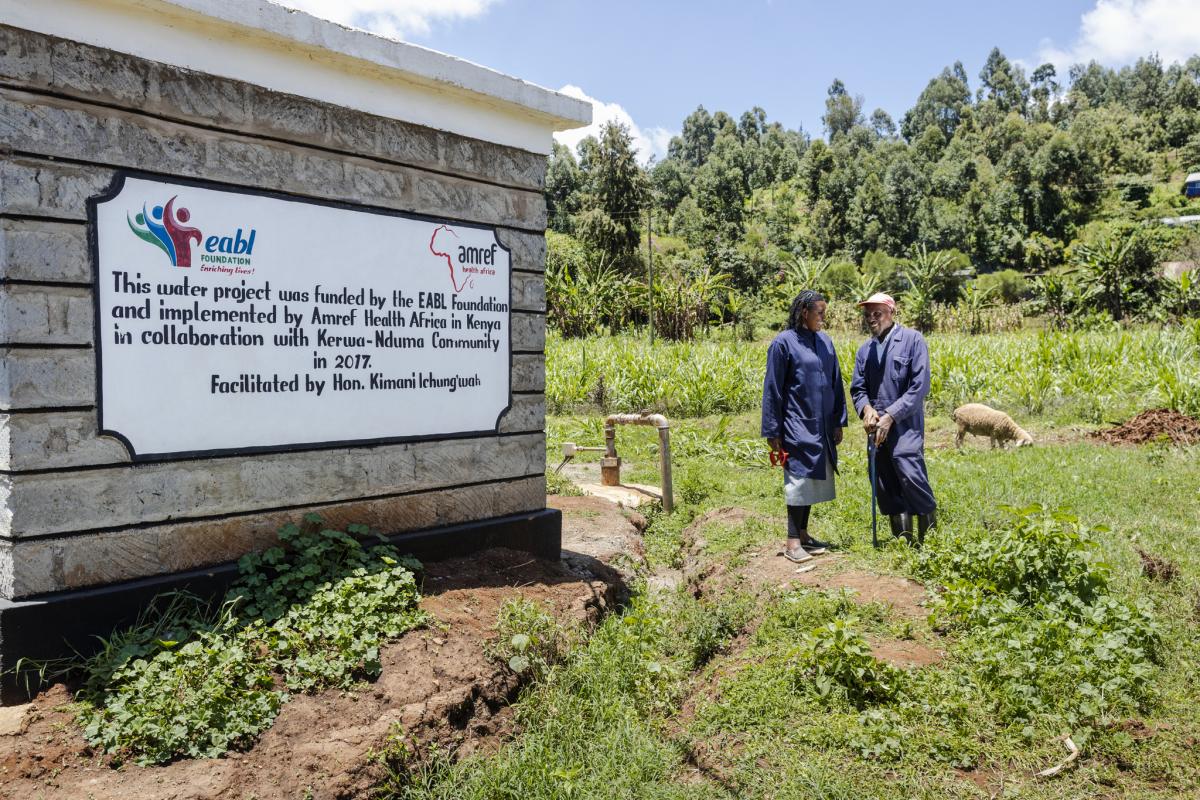 Like all major drinks companies, Diageo has been working to strict targets around water efficiency, which has improved by around 40% over the last 10 years. Among its 2020 goals is a commitment to return 100% of its wastewater to the environment safely and at its Uganda Breweries site near Kampala, it’s already meeting with some success.

The brewery extracts water from a part of Lake Victoria that has major challenges around pollution, but since investing in a new £4m wastewater treatment plant, which handles over 1 million litres of water a day, Diageo is now returning treated water to the lake that is cleaner than the water it originally extracted.

The company has also invested in reforestation schemes in the mountains behind the brewery to reduce erosion and run-off into the lake, which has become increasingly silted, making it hard to extract water in the first place.

This is the next phase of water stewardship. Not only doing it for your operations but helping suppliers do it in their catchment too

“It helps us commercially to run our business better but also, more importantly, helps the environment and the quality of the water in that part of Lake Victoria,” says Alexander.

In India, water efficiency among Diageo’s businesses has improved by 54% and on the back of this the company is starting to work with key strategic suppliers, giving them what Alexander describes as “the tools to help manage their water risk ... and try and embed an approach to managing water which is similar to ourselves”.

Alexander dubs this “scope three water risk” – in other words indirect water use, which still needs to be factored in and addressed. 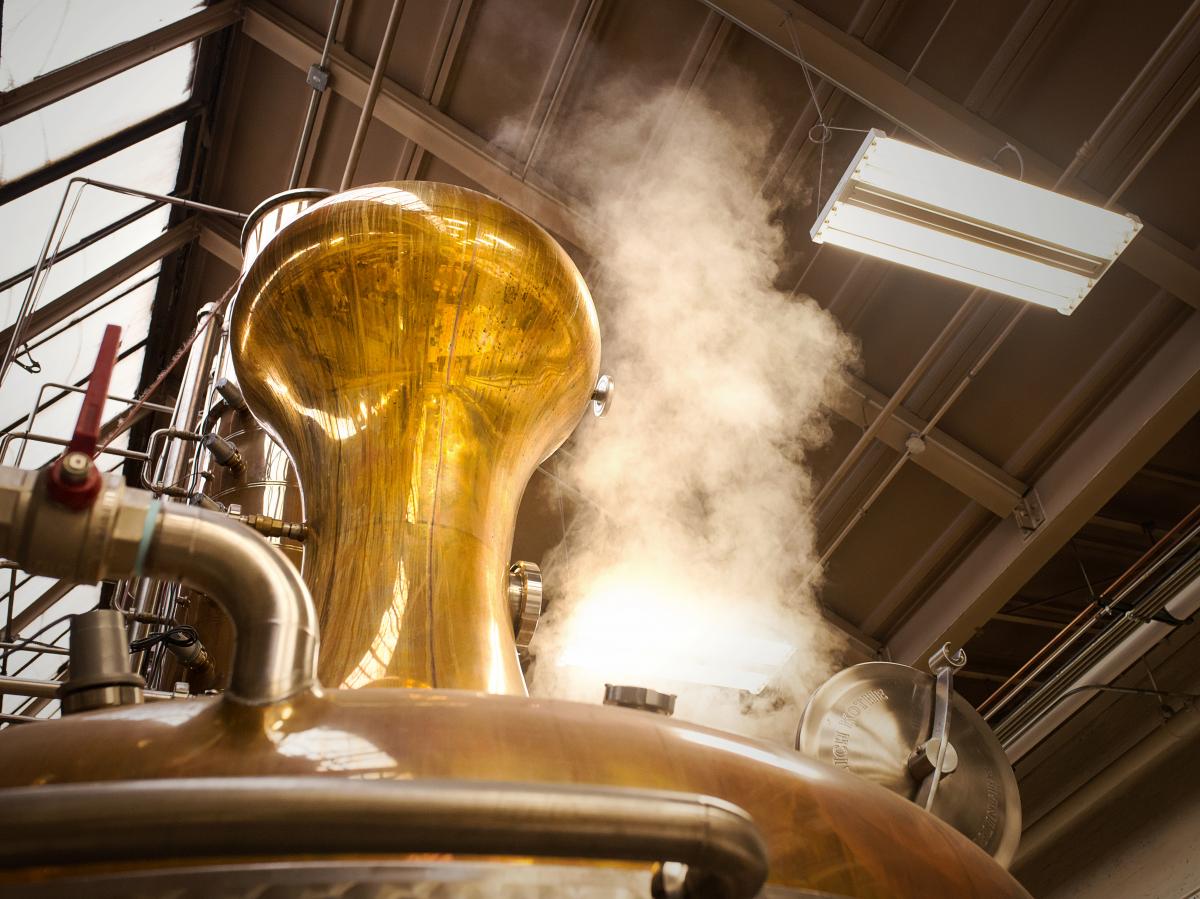 “This is the next phase of water stewardship,” he says. “Not only doing it for your own operations and your own catchment but helping suppliers do it in their catchment too, because ultimately that is part of your water footprint.”

Innovation is also playing its part. Carlsberg, for instance, is replacing traditional wet operations, such as rinsing and washing, with a dry alternative that uses compressed air. As part of its push towards zero wastewater by 2030, the business is also briefing members of its new Carlsberg Young Scientists Community.

Launched earlier this year, the community will help Carlsberg “close the water loop”, says Pawelas, by creating technologies that are both affordable and scalable. Scientists are now looking at new membrane technologies that can help to take pollutants out of used water, as well as researching biological treatments and ways of applying micro-organisms and algae to help purify water.

As we stretch our ambitions further and further, then we're going to have to get smarter and smarter

Innovation is also high on the agenda at Diageo, and the company’s research and development team is constantly scanning the water sector for the latest ideas, says Alexander, with a view to developing partnerships and accelerating technologies.

This includes working closely with start-ups, such as Horizon Proteins in Scotland, which is looking for new ways to give value to wastewater, in this case by recovering and re-using proteins from distillery by-products to use as fish food. It is working with another business to develop a processing unit that can be installed in sustainable drainage systems to help to clean and regenerate polluted water.

“As we stretch our ambitions further and further, then we're going to have to get smarter and smarter,” Alexander says. “[It’s] not just about spending money.”

Ann Mukherjee and the battle for a more inclusive cultu...
New drive to police ‘wild west’ of net-zero targets...
Scorched earth strategies: How Cargill, Unilever and Di...
Access to water is ‘matter of life or death’ for mi...
comments powered by Disqus