The disruptors: Jürgen Maier’s battle to wake UK to perils of a no-deal Brexit

With Britain’s exit from the European Union looming, UK business is facing arguably its most disruptive period since the Second World War. Worse than the 2008 financial crash even. Yet, despite serious misgivings in private, most British business leaders are reticent to speak out publicly.

Not so Jürgen Maier. The 55-year-old chief executive of Siemens UK, known to many for his appearances on BBC Question Time and on Radio Four’s Today programme, published an open letter in the influential magazine Politico last month lambasting government negotiators for “exhausting our business” and “wrecking the country’s tremendous reputation”. The incandescent 800-word missive ended with the words “enough is enough”.

It is not clear if Maier’s blistering broadside was heard in 10 Downing Street (11 days later, UK prime minister Theresa May announced a seven-month delay to the Brexit process). But if it wasn’t, it should have been.

I didn't want to be the person that, should we end up in a no-deal scenario, would say, ‘Gosh, I wish I would have said something beforehand'

Why? Because Siemens is a big player in British industry. The UK division of the German engineering giant employs 15,000 people and generates annual sales of around £5bn. If the Brexit palaver prevents Maier from persuading his bosses to back “finely balanced investment decisions”, as his letter warns, then the impact on UK jobs could be significant.

As interesting as what Maier chose to say, is why he chose to say it. Maier, who will be speaking at Ethical Corporation’s Responsible Business Summit in London in June, is not known as a critic of the government. Indeed, he has volunteered his time over recent years to support numerous government-led taskforces and committees. Only earlier this year, Maier was enthusiastically endorsing the Future Networks Lab, a public-private partnership aimed at promoting the benefits of advanced digital infrastructure.

The motivations behind his letter are multiple. In many ways, this multilingual, dual-national chief executive is an archetypal product of the European project. Born in Germany to Austrian parents, he moved to the UK in 1974 at age 10, one year into the UK’s membership of the European Union.

Siemens UK CEO @Juergen_Maier says the best option for leaving the EU is to find a middle ground and work out a sensible Brexit #bbcqt pic.twitter.com/8194JxPv80

After an adolescence in Leeds, he went on to graduate in production engineering from Nottingham Trent University, before joining Siemens on a fast-track programme. He has remained at the German conglomerate ever since, holding senior roles in both the UK and Germany before joining the firm’s UK board in 2008 and becoming chief executive six years later.

His second motivation has more to do with ethics than politics. Simply put: Maier felt that going public was the right thing to do. For starters, there are jobs on the line. The prospect of a disorderly Brexit, he says, would jeopardise the long-term future of company’s 15 factories.

“I didn't want to be the person that, should we end up in a no-deal scenario, would stand there and say, ‘Gosh, I wish I would have said something beforehand’.”

As importantly, he felt that politicians have “basically been lying” to the public in the Brexit debate. He cites the government’s pledge to have 40 free trade deals ready for signing the moment Brexit comes into force. Despite this promised figure showing little sign of materialising, politicians continue to “peddle that non-truth”.

At its heart, Maier states, a functioning civil society requires trust. Without it, societies suffer and commerce falters. “I just felt that we had got to the point where populist and inaccurate truths were allowed to be told. And I felt that there ought to be a voice to try and balance that.”

The word “balance” is central to the thinking of this adopted Yorkshireman. The backdrop to his formative years in Leeds was one of de-industrialisation, widespread unemployment, and a growing separation between the former manufacturing regions of the North and the increasingly prosperous service economy of London and the South-east. 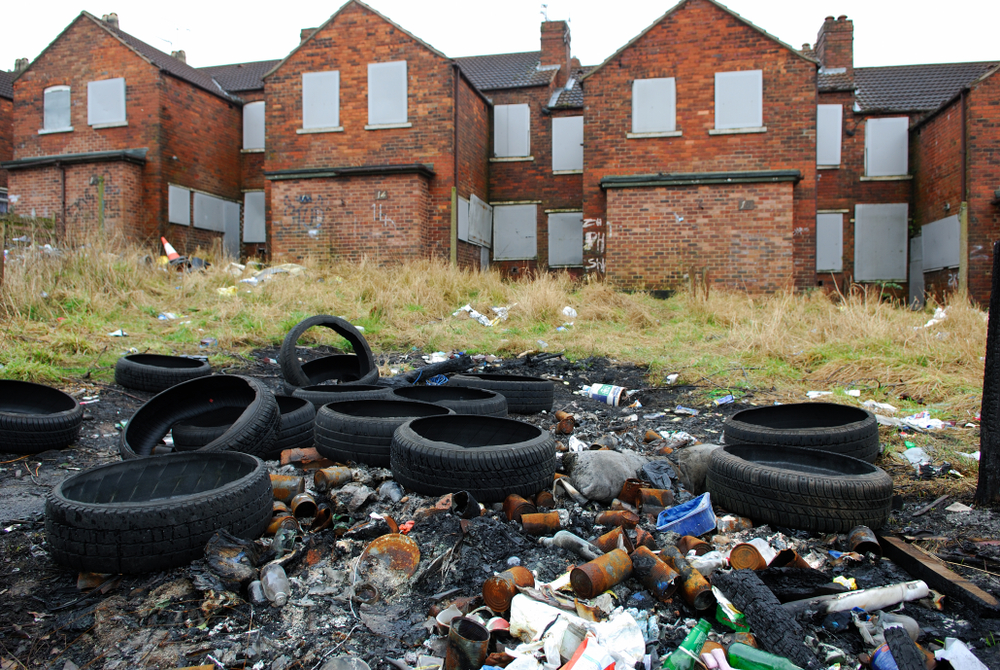 Jürgen Maier grew up amid the backdrop of industrial decline in the North. (Credit: Ian Francis/Shutterstock)

“A lot of my views about the situation we find ourselves in today stems from my growing up in Leeds and, as a young man, seeing a great northern city like that going to decline because the old industries were disappearing and there was no new industrial investment going in.”

In this sense, he argues, Brexit was merely the “final boiling-over point” of decades of socio-economic division caused by the uneven manner in which Britain’s service-based economy took root and in which old industries died out.

If we get this right, we will see a northern economy where we have built amazing innovation ecosystems

“Britain has undergone a major economic experiment over the last forty years. On the one hand, the experiment has been hugely successful. Overall, people’s average incomes are much higher now than when I was growing up.”

He adds: “But, on the other hand, the experiment has really failed. You can see that in the north-south divide. It’s this failure that I believe lies behind much of the political turmoil we are seeing at the moment.”

Hence, Maier’s plea in the concluding paragraph of his recent open letter to arrive at a “new consensus for Britain”. And not just a consensus on the vexed question of Europe. Maier is passionate that Britain should come together around a shared industrial policy that holds out the hope of resolving structural inequalities in the UK and bringing about genuine prosperity for all. 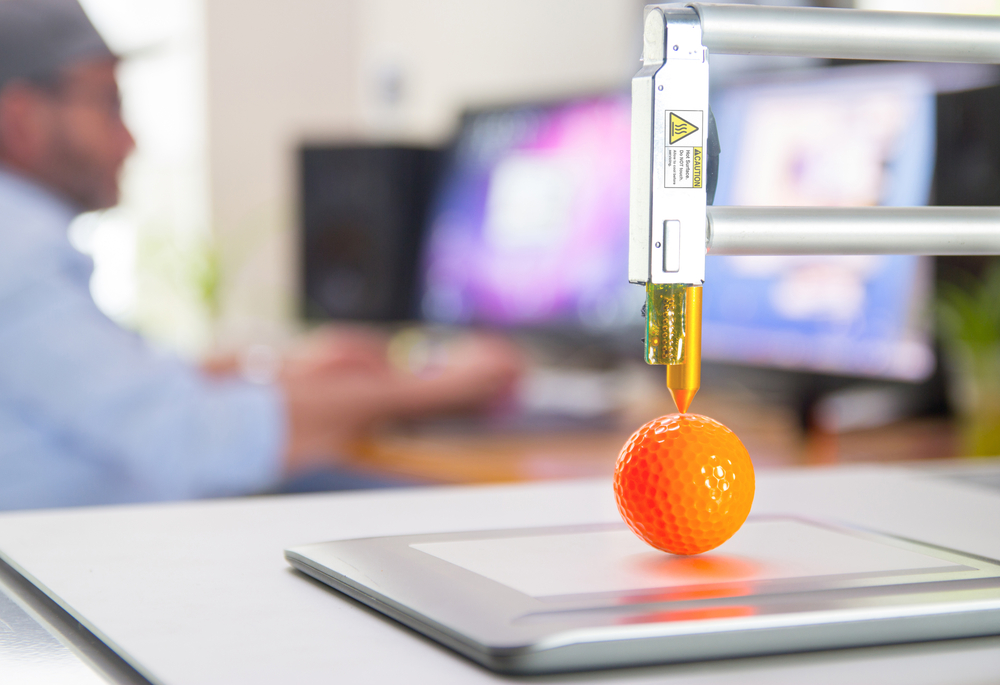 Step forward the fourth industrial revolution. It is a term that figures large in Maier’s lexicon and, despite garnering little media attention, gains mention in his Brexit missive. He fears that a no-deal exit will “cripple” the UK’s hopes of competing in the high-tech economy of tomorrow.

“It is really important is to have a new economic model that can create service industries, but, at the same time, can also create new manufacturing . . . If we get this right, we will see a northern economy where we have built amazing innovation ecosystems where universities and companies are collaborating to create new ‘best-of-breed’ technologies.”

The kinds of technologies he has in mind centre primarily around advanced robotics, artificial intelligence, 3D printing and the Internet of Things, areas of research and development in which, not coincidentally, Siemens is heavily invested.

In an ideal world, the cross-pollination of ideas and experience between academia and the private sector would see hundreds, if not thousands, of digital tech firms spring up around the UK. Their technological breakthroughs would, in turn, be taken up by mainstream industry, thereby increasing the overall competitiveness and productivity of UK Plc and creating copious new well-paid jobs in the process.

It’s a nice idea. But is it realistic? Very much so, says Maier. Moreover, the wheels are already turning, he insists. All that is lacking is for the government to start supporting cutting-edge industrial research and development in a more strategic and defined way.

“We need the government to co-invest in the development of innovative technologies that are currently at a pre-market stage. Companies need some incentive to come and play. Then, of course, once these technologies become commercially viable, it falls to the private sector to do its best to scale them up.” 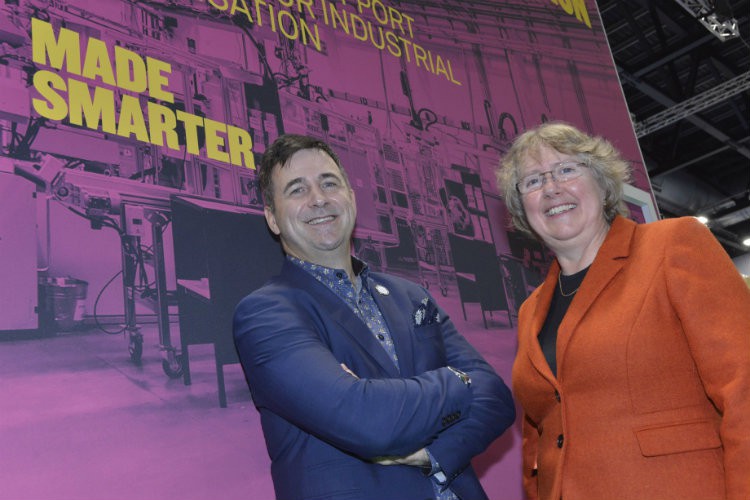 Jürgen Maier with Donna Edwards from Made Smarter North West.

As a model of what could happen, Maier cites the Made Smarter programme in the north-west of England. The £20m initiative aims to help small and medium-sized businesses improve their manufacturing processes through the adoption of industrial design technologies.

Siemens is heavily involved in the programme, which offers match-funded grants, bespoke consultancy and mentoring, among other resources. So too are other high-tech manufacturers with a presence in the region, such as Rolls-Royce, BAE Systems, Airbus and Jaguar Land Rover.

“I believe this is truly a once-in-a-generational opportunity to boost productivity and create the high-value, highly paid jobs of the future,” Maier said at the initiative’s launch back in November 2018.

Fourth-generation smart tech alone won’t revolutionise the UK’s left-behind regions, however. For that, the skilling-up of today’s workforce will also be required, says Maier. Those in need of instruction include existing business leaders, he adds, arguing that they need training in the “art of the possible”.

Even with the support of the government, the fairer and more dynamic industrial model that Maier hopes will take a decade, or even two, to come to fruition. Which explains why he is so impatient to get on – and also why Brexit’s total side-tracking of the UK government’s industrial strategy makes his blood boil.

His main plea to the government isn’t even about money. With enough seed funding, he argues, innovations will start emerging and private investors will quickly get on board. No, what he primarily wants from politicians is policy consistency and public advocacy. 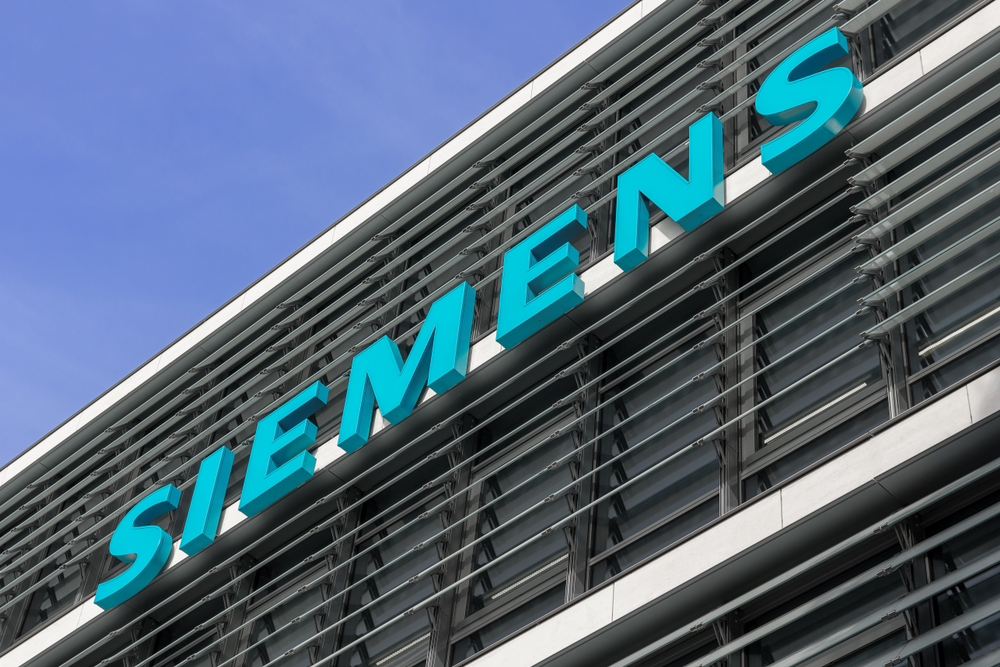 A hard Brexit could impact the 15,000 people Siemens employs in the UK. (Credit: Robert Fruehauf/Shutterstock)

“More than anything, ministers just need to start talking about these issues and to make them an important part of the economic agenda. That way, we can create a movement and bring about the confidence that’s required to drive this industrial revolution forward.”

The next Brexit deadline lies less than six months away. How future negotiations will unfold is anyone’s guess. But one man who will be certainly watching events closely is Siemens UK’s out-spoken chief executive. And, sure as eggs are Eier, he will be doing so with his favourite letter-writing pen close at hand.

Siemens' Jürgen Maier will be one of more than 150 speakers at the 18th annual Responsible Business Summit Europe 10-12 June in London.

Fellow of the Royal Academy of Engineering
2017

Non-exec board member, Department for Business, Innovation and Skills
2014-2016