Faced with ballooning congestion and pollution, China has been testing new technologies for transport and buildings in its eco-cities. Mark Hillsdon reports

In the early 2000s China began to plan a new generation of conurbations, cities that placed a new emphasis on improved public transport, renewable energy, and waste reduction.

Since then several hundred have been designed, often in co-operation with foreign governments. Many, including high-profile Dongtan on the outskirts of Shanghai, never really left the drawing board. Others, however, have found an important role as testing grounds for new technologies, from electric buses to flood protection, as well as being home to hundreds of thousands of people.

“Eco-cities were experiments,” says Peter Head, chief executive of the UK-based Ecological Sequestration Trust. While at built-environment specialists Arup, Head worked on the master plan for Dongtan, a zero-carbon city intended to house 500,000 people, which was abandoned after key officials in the Chinese development company were arrested for graft.

China has a simple ambition, to make better cities than the ones thrown up to merely house people

The eco-cities are also a reaction to rapid urbanization, which saw China’s urban population double to 52% between 1991 and 2012. Today the figure is 57%, and it’s expected to reach 70% by 2030, or some 2 billion people. President Xi Jinping has made creating a new “ecological civilization” the main policy of central government as it set out on a war to tackle pollution.

“China has a simple ambition, to make better cities than the ones thrown up to merely house people in the rush to urbanization,” says Austin William, director of the Future Cities Project and author of “China's Urban Revolution: Understanding Chinese Eco-Cities.

There is an element of people power too, with an emerging urban middle class demanding good housing, schools, healthcare and other public services, says Jaya Skandamoorthy, the outgoing general manager of BRE (Building Research Establishment) China, which is currently extending BREEAM standards of green building into China’s construction industry. 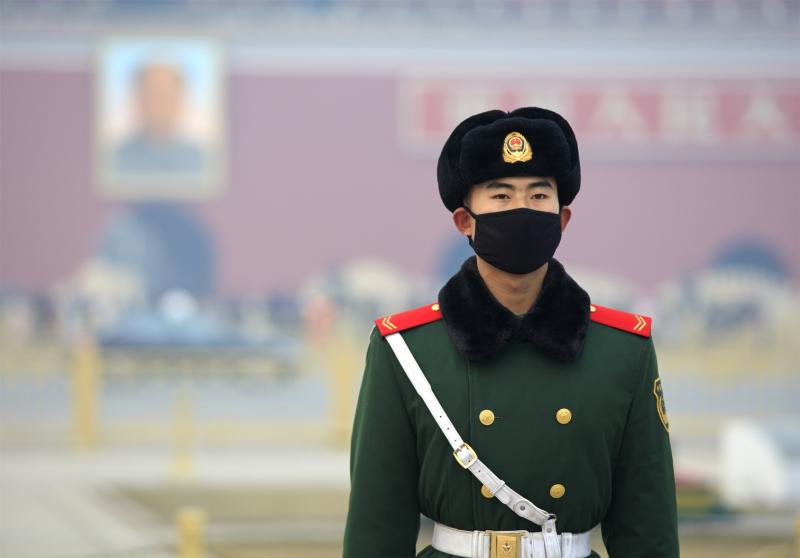 There’s no set definition of an eco-city, and while some do actually involve the construction of whole new cities, others are bolt-ons to existing conurbations, and more still focus on retro-fitting old buildings.

The Guangming Eco-city in southern China is a flagship project that can now count a 100% fully electric bus fleet among its achievements. “They’ve built it amazingly well,” says Sean Kidney, CEO of not-for-profit Climate Bonds Initiative, who has been working with the People’s Bank of China to develop the green bonds that are now funding some of the innovation in China’s eco-cities.

“There are shared block air conditioning units, which reduce energy costs down to 30%,” he continues. “There is a metro system within 300m of wherever you stand in the city. There are amazing water recycling systems.”

China is facing environmental boundaries to do with water, air, noise, congestion, food and energy

Shenzhen is also one of seven cities that are set to benefit from World Bank funding to reduce traffic and improve air quality. Last year, China received a grant of $32m to support pilot projects for transit-oriented development (TOD), an urban planning concept that integrates land use and transportation.

According to Wanli Fang, an urban economist at the World Bank: “This pilot project focuses on compact, mixed-use, pedestrian and bicycle-friendly development around transit stations that can help reverse the trend of a car-dependent city sprawl, improve air quality, reduce road congestion, and make it easier for people to get to jobs and access other opportunities.”

One of the best-known eco-cities is Tianjin, a joint project with the Singapore government that started in 2008. Set on the coast, around 150km from Beijing, its priorities are conservation of energy and water, says Deng. But land remediation has also proved important, with around one third of the city located on a former salt field. 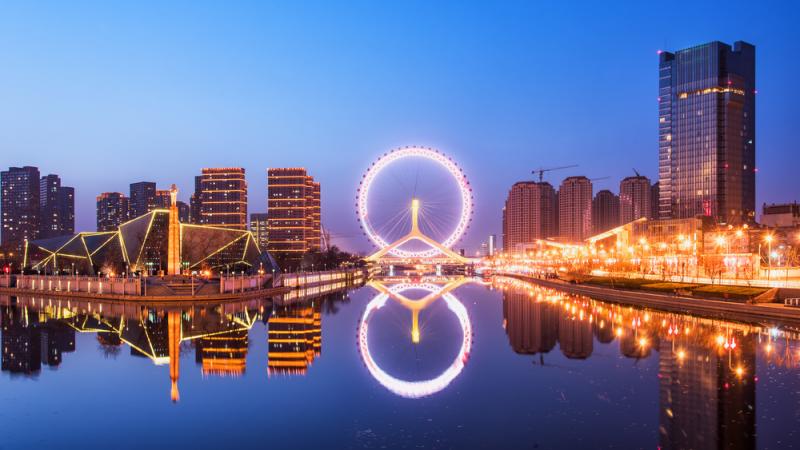 Austin William said the skills learnt through the project are now being used to train farmers and engineers in western China, and help them to reclaim parts of the Gobi Desert.

Another important innovation is China’s new legion of so-called sponge cities, where the fabric of the city has infrastructure to stop flooding and save water.

There are now around 30 pilot cities, the result of the Sponge City Initiative launched in 2015, which have received $12bn to fund projects that have seen concrete pavements replaced with semi-permeable walkways, where rain soaks into the soil rather than being channelled into storm drains.

Urban wetlands and green roofs have proliferated, while in the city of Kunshan, rainwater collection tanks where water can be purified, have been installed under a new central elevated expressway. The aim of the initiative is to see 80% of urban areas in China re-use at least 70% of their rainwater by 2020.

Although technically not classed as an eco-city, Xian’s skyline now includes a new 18 metre smog-sucking chimney, which uses sunlight to filter out noxious particles and then emit clean air. While the results have still to be peer-reviewed, initial findings suggested a 15% improvement in air quality within a 10km radius of the tower.

While Chinese companies are world leaders in producing technologies such as wind turbines, solar panels and electric vehicles, many of the technologies in the green building sector are from western companies. 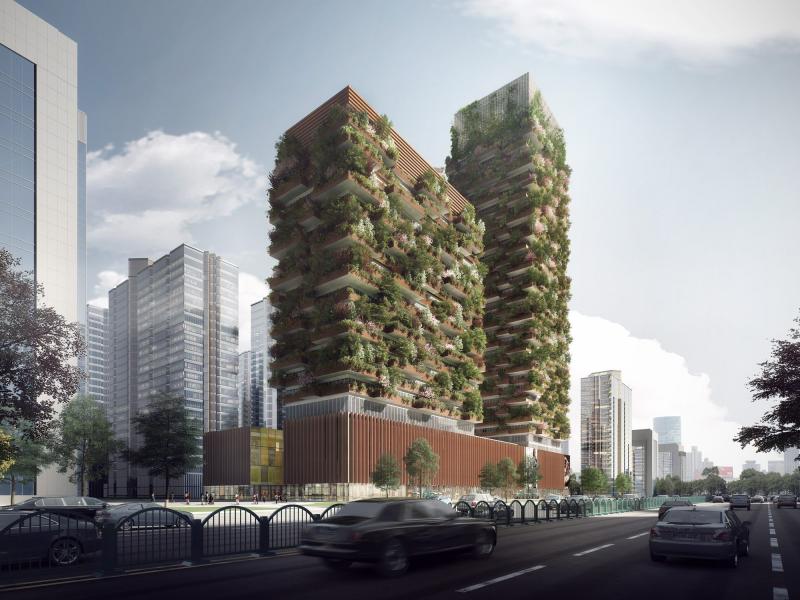 In Nanjing, Italian architect Stefano Boeri’s two forest towers are due for completion this year. Festooned with trees and cascading plants, the vertical forest will be capable of absorbing 25 tons of CO2 a year, while producing around 22 tons of oxygen.

Boeri, who hopes to create a series of sustainable mini-cities across China, has also received the go-ahead to scale up his plans with the Liuzhou Forest City. Set in the mountainous southern province of Guangxi, the city will be home to around 30,000 people and more than a million plants, and will be fuelled entirely by renewable energy.

Another idea that has also attracted attention in China is the concept of “building as power station”, that is currently being developed by Specific, a UK government-funded academic and industrial consortium project based at Swansea University, in partnership with Akzo Nobel, NSG Pilkington, Tata Steel and Cardiff University.

The basic idea, explains the project’s technology director Dr Justin Searle, is to use the outer surface of the building to harvest energy, primarily solar. Importantly, the energy is stored in a new generation of salt water batteries, which are designed to be resilient and robust, unlike smaller, portable lithium-ion batteries. In its first 18 months, the classroom generated one and a half times more energy than it used.

The next step, says Searle, are “solar windows that are semi-transparent and also generate power – for things like high-rise buildings that could be a good option”.

Another technology that is set to appeal to the Chinese market is inter-seasonal heating, which uses phase-change materials. “You take excess heat from the summer and store it via a chemical reaction and then you can discharge that heat in the winter,” says Searle. 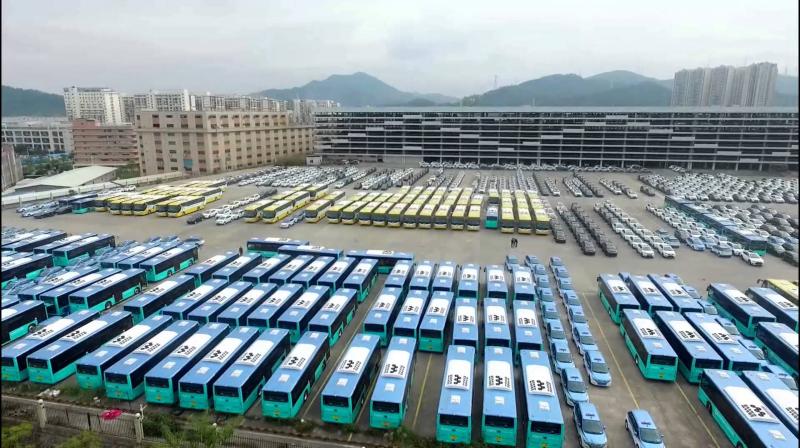 Kidney of the Climate Bonds Initiative believes there are still plenty of opportunities for foreign businesses in China. “They are shopping the world and I keep saying to European manufactures that this is a huge opportunity. Everyone in Europe with a good energy-efficient, green city technology needs to be in China hawking their services now, because they have lots of local products but there are so many gaps.

“They are trying to do what it took London 40 years to do, but in five years.”

Mark Hillsdon is a Manchester-based freelance writer who writes on business and sustainability for Ethical Corporation, the Guardian, and a range of nature-based titles including CountryFile and BBC Wildlife.

For more on the in-depth briefing China’s New Dawn, see:

Women and children first: how brands are innovating to help China’s female workers

IKEA and Audi pulled up for sexist marketing

'Could COP26 signal the end of coal? Only if we in...
Policy Watch: Kerry tells world leaders to ‘stop the ...
Hopes for success at COP26 dim despite alarm raised by ...
ESG Watch: 11 funds join UK greener pensions campaign
comments powered by Disqus