When Marks and Spencer’s Mike Barry was asked by Radio 4’s Today programme about the company’s sale of cauliflower “steaks”, slices of cauliflower with a lemon and herb dressing encased in plastic, he said the packaging was recyclable and necessary to prevent food waste – before M&S later that day bowed to the media storm and said it would discontinue the product.

The burgeoning consumer backlash against plastics may be pushing leading UK retailers and brands to cut down on their use of plastic packaging, but it is adding to their challenges in another area of sustainability: their target to cut food waste by at least 20% by 2025 under the Courtauld 2025 commitment.

Liz Goodwin, who heads up the World Resources Institute’s (WRI) food loss and waste programme, knows about the trade-offs between packaging and food waste. As former CEO of the UK waste-reduction charity WRAP she was instrumental in setting up the Courtauld commitment in 2005, a collaborative platform that joined leading retailers, brand owners, manufacturers and suppliers, along with charities and local authorities, to reduce all forms of waste in the food sector.

The anti-packaging backlash is creating its own challenges. (Credit: Goncharov_Artem/Shutterstock)

She hastens to add: “That doesn’t mean it’s acceptable to have lots of plastic that’s recyclable and not being recycled. Plastics should be recyclable and go back into the system and be recovered.” It’s up to retailers and producers to make recycling simpler by reducing the numbers of different plastics they use, and helping consumers to recycle it, she says.

But food waste is a problem that is far bigger than UK retailers and the brands that supply them. A third of the food produced globally goes to waste, despite the fact that 800 million people worldwide do not get enough to eat, according to the UN’s Food and Agriculture Organization.

Food that has been wasted either at the retail or consumer level, or along the production supply chain, consumes about one quarter of all water used by agriculture, requires cropland area the size of China, and generates about 8% of global greenhouse gas emissions. It also amounts to $940bn in global annual economic losses. 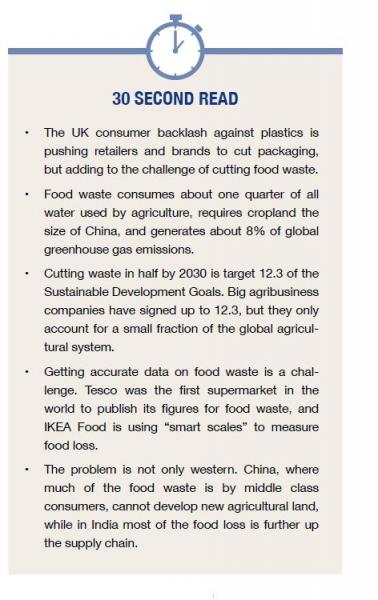 Cutting food waste in half by 2030 is target 12.3 of the Sustainable Development Goals (SDGs). Early in 2016 WRI set up the Champions 12.3 project to mobilise a multi-stakeholder response to meeting SDG target 12.3, the only non-UN agency to co-ordinate action on an SDG, with Dave Lewis, CEO of Tesco, as chair.

Goodwin says the challenge of taking the battle against food loss and waste to a global level was too compelling for her to turn down, and she left WRAP in mid-2016 to head up the Champions 12.3 project for WRI.

The impact of Champions 12.3 in a short time has been impressive, particularly when it comes to corporate action. According to its first progress report last year, 60% of the world’s largest food companies by revenue have now set food loss and waste reduction targets in line with SDG 12.3, and half of those are working with their suppliers to bring them into line. This is an area where Tesco has shown real leadership, Goodwin says, with Lewis announcing last September that he had signed an agreement with his top 25 suppliers last year to target food waste across its entire operations. 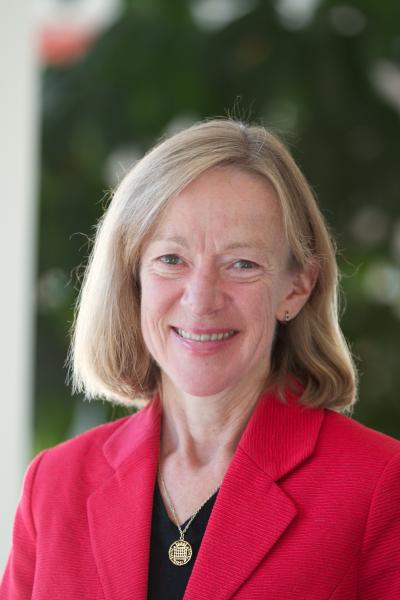 But as the report points out, the challenges of achieving a 50% cut by 2030 are immense. The Courtauld commitment succeeded in cutting UK food waste by 21%, she points out. “But how do you get beyond that? That’s what’s worrying me because I know how hard it was to get to 21%.”

In fact food waste reduction in the UK plateaued after 2012, for reasons that Goodwin says are not clear. “It could be that households made changes in the areas where it’s easiest to reduce waste, or that government spending for awareness-raising campaigns has dropped, or the economy has improved and so people aren’t as mindful about what they spend on food. …. It’s hard to pinpoint, but what is clear is that more attention and effort is needed.” (See ‘The real food waste battle should be on the farm.)

One victory for Champions 12.3 on the global level last year was signing up some of the big agribusiness companies, including giants Olam and Wilmar, through the newly launched Global Agri-business Alliance (GAA), a CEO-led initiative started by Olam co-founder Sunny Verghese and the World Business Council for Sustainable Development’s president Peter Bakker.

Goodwin says the alliance’s food loss and waste resolution last September is “great to have”, and filled an important gap. While the Consumer Goods Forum made a commitment in 2015 to halve food waste among its 400 members by 2025, “there wasn’t the same initiative further up the supply chain”.

She points out that although GAA members span the food value chain, with growers and producers, traders, seed suppliers and primary processors, they only account for a small fraction of the entire global agricultural system. 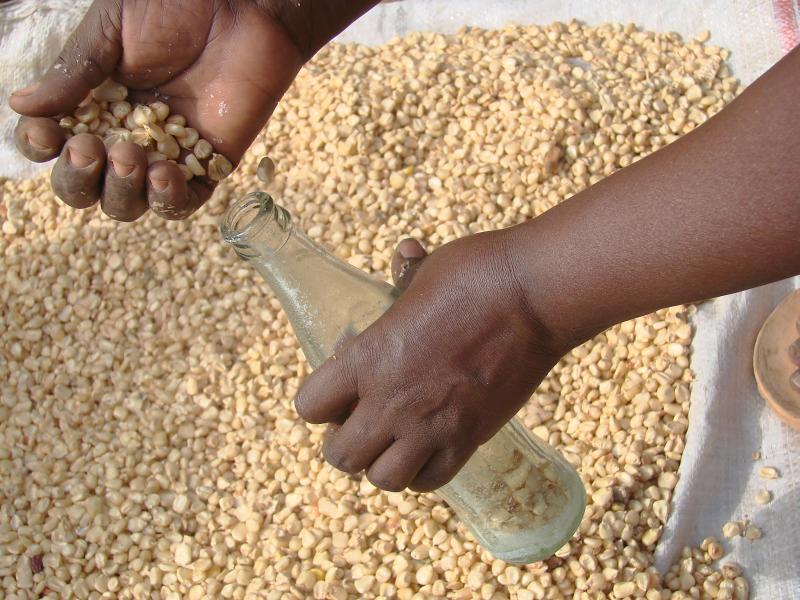 Testing maize for dryness in Kenya before storing to prevent spoilage

US giant Cargill, for example, has not joined the GAA, and does not list SDG12 among its SDG priorities, though it is funding food redistribution efforts in the UK in partnership with charity FareShare.

Goodwin says she hopes that others will follow when they see the financial rewards reaped by GAA members for taking steps to monitor food loss and prevent it, including on the farm. A report last year by Champions 12.3 to establish a business case looked at 1,200 business sites across 17 countries and found that 99% earned a positive return on investment, and half saw returns in excess of 14:1.

Getting accurate and consistent data is one of the biggest challenges Champions 12.3 faces

“The business case for them [agribusiness companies] is even stronger than for the retailers,” says Goodwin. Asked what that is, she says there is a huge amount of variation, and next month Champions 12.3 will be publishing another report doing a deep-dive into different sectors, providing data to support the business case.

Getting accurate and consistent data is one of the biggest challenges Champions 12.3 faces, as Lewis pointed out in Ethical Corporation last year. Tesco was the first supermarket in the world to publish its figures for food waste four years ago, and set up its own methodology in isolation. In 2016 the WRI partnered with the CGF and the UN’s Food and Agriculture Organisation to launch the Food Loss and Waste Accounting and Reporting Standard. Besides Tesco, it is being used by companies including Sainsbury’s, Kellogg, Nestlé, Campbell’s Soup, Ahold Delhaize and IKEA Food. 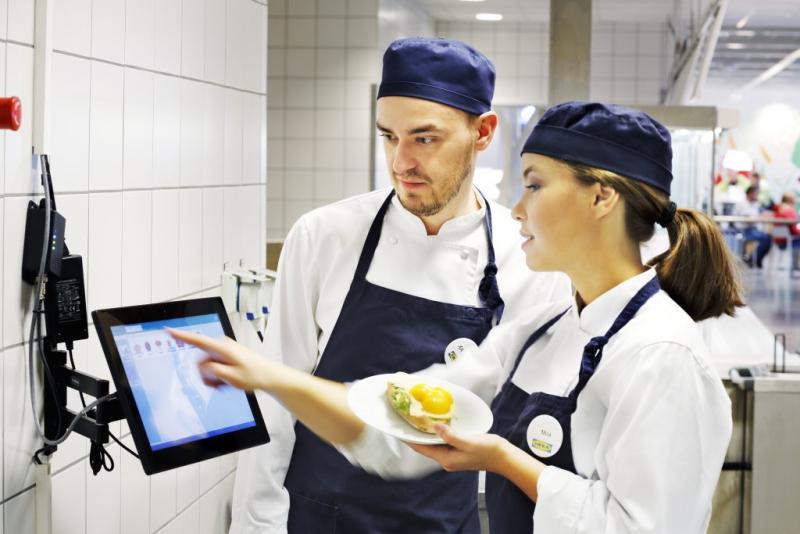 The latter, which aims to halve its food waste at all its stores by the end of 2020, is using “smart scales” to keep track of food waste. Co-workers weigh, categorise and register all food waste, and give the reason it arose. The system then calculates the cost. IKEA reported last year that stores that had implemented the system had seen waste reduce by 20% over the first 12 weeks, and broke even on its investment after 20.

The number of companies that are using the standard is still small, but Goodwin says the corporate effort on food waste is picking up steam. “There are signs that companies are moving in the right directions. The big challenge is to get countries and governments to focus on it.”

While some governments, including the UK and US, measure and report on food loss and waste within their borders, they account for only 7% of the world’s population.

Asked whether other countries should also follow the lead of France, which in 2016 banned supermarkets from throwing away or destroying unsold food, encouraging them to redistribute it to food charities, Goodwin says: “The French approach is interesting. I couldn’t criticise it but my concern about redistribution is that it makes it acceptable to have food waste in the first place.”

She says food redistribution also begs the question of why so many people in western societies need food handouts to survive. “These are tricky questions. None of it is easy.”

It is not only in western societies where food waste is a problem, and Goodwin says Champions 12.3 will be focusing this year on trying to tackle the issue in China and India. 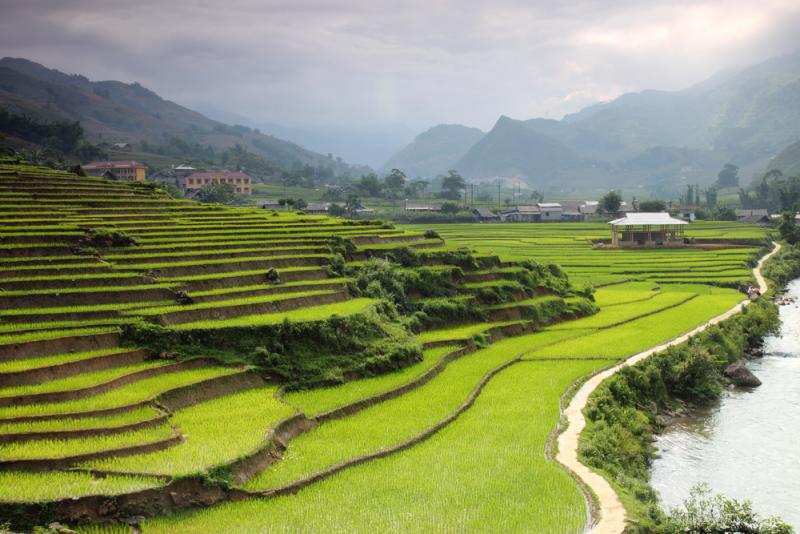 Food security is an increasingly critical issue in the former, yet the 35m tonnes of food lost and wasted annually is enough to feed 30-50 million people, according to a recent report by Future Directions International. Having almost completely utilised the 120m hectares of arable land it has available to grow food, China can not develop new agricultural land to feed the 135 million undernourished citizens it already has – not to mention its predicted population growth, the study points out.

While in China much of the waste is from burgeoning middle class consumers, in India most of the food loss is further up the supply chain, at the level of smallholder farms.

“As India’s middle class grows, though, it will have consumer issues, too,” Goodwin says. “We need to understand where the issues are in those countries, what the hotspots are. If you identify that there are lots of cold storage issues in India, for example, that may require funding for supply chain partnerships.”

The roadmap “makes scary reading …. But I am still optimistic

One thing she learned from her years at WRAP, she says, is that it is only by getting the different parts of the supply chain to talk to one another and understand how their actions impact others that solutions will emerge. “You have to take a whole-systems approach to it,” she says.

Champions 12.3 last September published a roadmap with three-yearly milestones that should be reached to achieve the 2030 goal. A 5% reduction is targeted by 2018, but the progress report admits the organisation doesn’t know whether this will be achieved because of the lack of available data.

Goodwin says the roadmap “makes scary reading …. But I am still optimistic because there are enough people who care about this, who have potential to influence their organisations, and the organisations they work with. I’m quite an optimistic person – which is why I am still doing this.”

This is part of our in-depth briefing on Food Waste. See also:

The firms cutting food waste from field to fork

‘The real food waste battle should be on the farm,’ says Feedback charity

Brands failed to meet promises to protect forests. We c...
Can sustainable soya farming come fast enough to save t...
EU sows seeds for farming revolution, but will they gro...
Brand Watch: ’Tis the season to use recycled plastics...
comments powered by Disqus