California has long been a global leader providing clean energy technologies and the most aggressive policies to tackle climate change. Its cuts in emissions from buildings and power plants have even put it ahead of schedule to meet its 2020 climate goal of no increase in CO2 emissions compared with 1990 levels.

But there are concerns that unless the Golden State makes greater inroads on decarbonizing transportation, which accounts for half of California’s heat-trapping emissions, it will not meet its goals, set this year, for a further 40% decrease in emissions by 2030, and 80% of 1990 levels by 2050.

Last year 350,000 electric vehicles were sold in California – about half of all zero emissions vehicles (ZEVs) in the nation. Numerous regulatory efforts since 2012 have helped to boost the number of ZEVs in the state, which have grown from 25,000 in 2012 and now account for about 5% of all new California car sales.

But according to the California Air Resources Board (CARB) that number is not nearly enough to make a dent in transport emissions.

“California needs millions of zero emission vehicles on our streets and highways to meet our clean air and climate goals,” CARB says.

Few places are better suited for rapid EV expansion than California, where so much renewable energy is being produced for the grid that the zero-emissions electricity isn’t even being fully exploited. “By electrifying trucks, buses and cars we can balance the grid better with the surplus of renewable energy [that we produce],” said Danny Kennedy, managing director of the California Clean Energy Fund.“Mobility and electricity are now the same.” 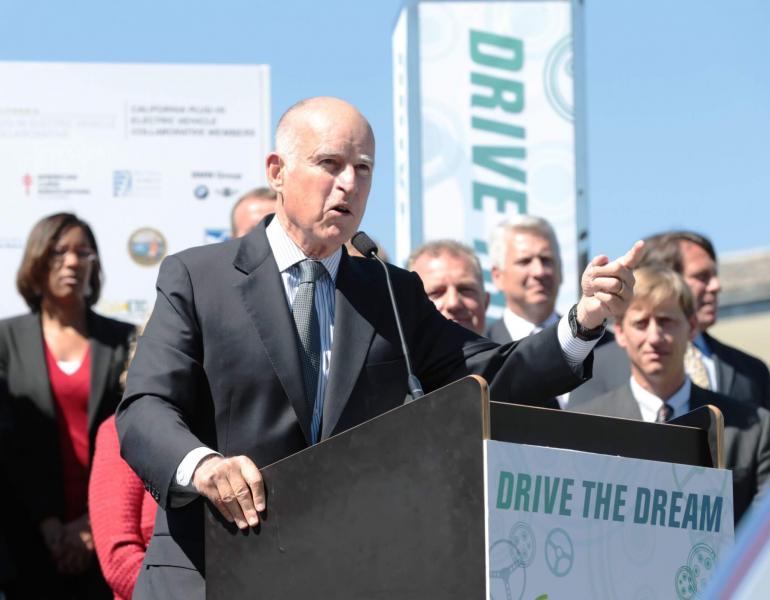 California Governor Jerry Brown has set a target of 5m ZEVs in the state by 2030. (Credit: Office of Governor)

Earlier this year Governor Jerry Brown signed an executive order setting a target to put five million ZEVs on the roads by 2030, alongside an eight-year $2.5bn initiative to install another 250,000 vehicle charging stations and 200 hydrogen fueling stations across the state by 2025.

Brown, who is the driving force behind next month’s Global Climate Action Summit in San Francisco, is hoping that the Zero Emission Vehicle (ZEV) Challenge, one of a series of challenges ahead of the 12-14 September event, will help put California’s transition to EV into even higher gear.

The challenge, which is being led by The Climate Group and C40 Cities, aims to amplify collective EV purchasing power by bringing together existing programmes, such as The Climate Group’s EV100 programme, and C40’s Fossil Fuel Free Streets Declaration to procure only zero-emission buses.

Since businesses purchase 50% of all new vehicles – some three million cars, vans and trucks are expected to be sold to commercial and government fleets in 2019 — EV proponents see a great opportunity to shift buying power and drive the market toward mass demand for EVs.

The challenge also calls on automakers to commit to setting targets for ZEVs as a percentage of their sales by 2025.

“We call on all manufacturers to join us in this historic transformation, to be leaders in the race that will leave old-style combustion-driven inefficient, pollution-spewing engines in the dust,” Mary Nichols, chair of CARB, said at the launch of the ZEV Challenge in July. 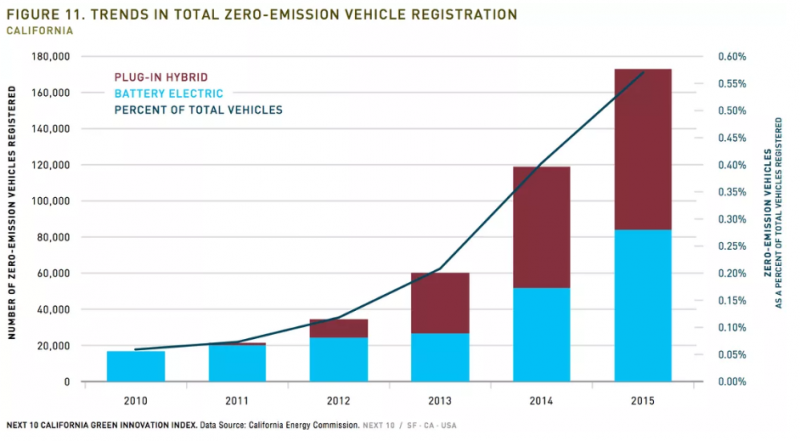 The challenge is backed by the Under2 Coalition, a grouping of more than 200 sub-national governments and cities in 43 countries – from Queensland, Australia, and Quebec, Canada, to Baden-Württemberg, Germany, and Catalonia, Spain – as well as two dozen cities and states across the US committed to keeping global temperatures below a two-degree Celsius rise, and carbon emissions below two tons per capita. Together, the coalition represents 1.3 billion people and accounts for nearly 40% of the global economy.

The challenge has also been endorsed by leading companies, including EDF Energy, LeasePlan and Unilever.

Tim Ash Vie, director of the Under2 Coalition at The Climate Group, which is secretariat of the coalition, said: “We’ve got to work the two ends of the system to close the gap between governments and businesses so that governments are putting their money where they mouth is, and those with the purchasing power significantly increase the uptake. The challenge is trying to mobilize business and state action and the buying power to allow the EV market to grow and expand at the rate that is required.”

One of the biggest supporters is Los Angeles Mayor Eric Garcetti, whose city is rolling out the nation’s largest electric bus fleet and has installed 1,500 EV charging stations – the most in the nation – as part of the city’s aggressive EV procurement plan, which requires all new vehicles to be at least 50% electric.

Garcetti was among a dozen US mayors who have signed the Fossil Fuel Free Streets Declaration, which mandates procurements of only zero-emission buses in their cities by 2025. 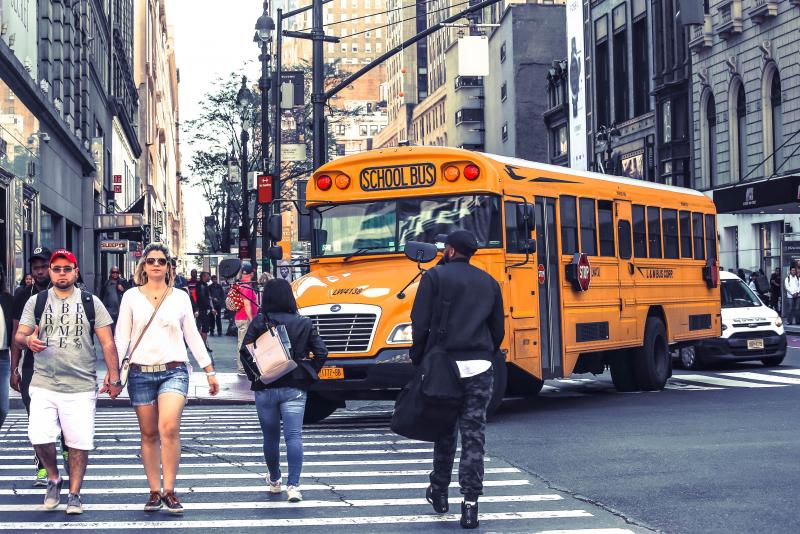 Last year, 30 cities in the Climate Mayors grouping, which boasts 400 members across the US, alerted automakers of their plans to spend more than $10bn on electric cars and trucks.

More than anything, climate leaders envision the ZEV Challenge as the next definitive step to help transform the auto industry through sheer market power. According to Angie Fyfe, executive director of local government network ICLEI US, which co-ordinates climate action by cities, sustainable public procurement is “a big tool in the toolbox of things local governments can and should be doing, because collectively they have huge purchasing power”.

We can’t keep EVs in the showrooms ... We want to show automakers that there’s demand

The goal, she says, is “to rally the number of mayors across the US to demonstrate to vehicle manufacturers that there is a demand for EVs and EV infrastructure”.

Joel Levin, executive director of Plug In America, a national advocacy organization based in Los Angeles, says: “The ZEV Challenge is a unique opportunity because everyone’s looking at California. This is where EVs come from – this is the place where it all started.”

In addition to encouraging companies and governments to purchase more EV fleets, he added, corporations need to see the value in increasing workplace charging stations. 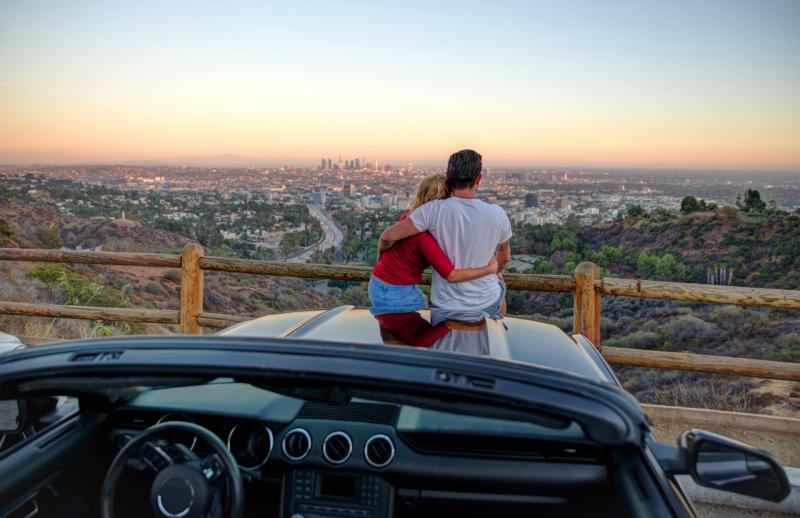 America’s love affair with the internal combustion engine may be at an end. (Credit: oneinchpunch/Shutterstock)

“We can’t keep EVs in the showrooms. Automakers say, ‘if a lot of people want these cars, we’ll build them’. We want to show that there’s demand, the cars are pouring out, and that they need to build more of them.”

He adds: “There are lots of examples of companies that put in charging stations at work and suddenly more people are buying EVs. This drives demand and makes automakers want to produce more. The EV market in California is way ahead of anyone in the country, but there’s far more that can be done.”

Kennedy of the California Clean Energy Fund agrees: “The writing is on the wall: The internal combustion engine is gone. In the next couple of decades, the car will no longer run on pistons and gas, it will run on batteries.”

Michael Levitin is a journalist based in Berkeley, California, covering climate and clean energy financing among other topics. He has written for The Atlantic, The Guardian, Time and Newsweek.

This article is part of the in-depth Urban Transport briefing. See also:

Are autonomous vehicles the answer to cities’ transport woes?

Bumps in the UK’s road to zero emission vehicles

Hydrogen hits the road in bid to speed up energy transition

Creating a hydrogen economy in Aberdeen

Rethinking the commute to work post Covid-19
Leaving no one behind in the clean energy revolution
Watch on demand: Highlights from Reuters Events race to...
Why green is good as the world struggles to recover fro...
comments powered by Disqus