Analysis: Why Tesla now has Volkswagen in its rear-view mirror

In the fifth in our series on the top 250 greenhouse gas emitters, David Lubin and Tim Nixon of Signal Climate Analytics argue that big carmakers are claiming the same road as disrupters like BYD in the electric vehicle race

Much has been made of the historic rise in valuation of electric vehicle companies like Tesla and BYD, which are disrupting the auto sector, and Reuters has taken note of the recent pull back in some of these stratospheric valuations.

What may be lying beneath the surface of this still impressive performance from the disruptors is that the old implicit rule for business – the alleged trade off between profitability and the environmental responsibility – is less true today than in the history of the auto sector.

In the last decade, success in the auto sector was based less on improving environmental impacts of the products they built (most all the impact is from product use), and more based on the need to satisfy consumers’ insatiable demand to go bigger – supersize me with a SUV (and let’s not focus on the carbon footprint).

And many of these gas-guzzling SUVs are still in the legacy manufacturer’s product pipelines and will be rolling onto the road for years to come. As you can see from the  graphic, below, SUVs sales are zooming ahead of passenger vehicles in most major economies, including China, South Korea, Russia and the EU. 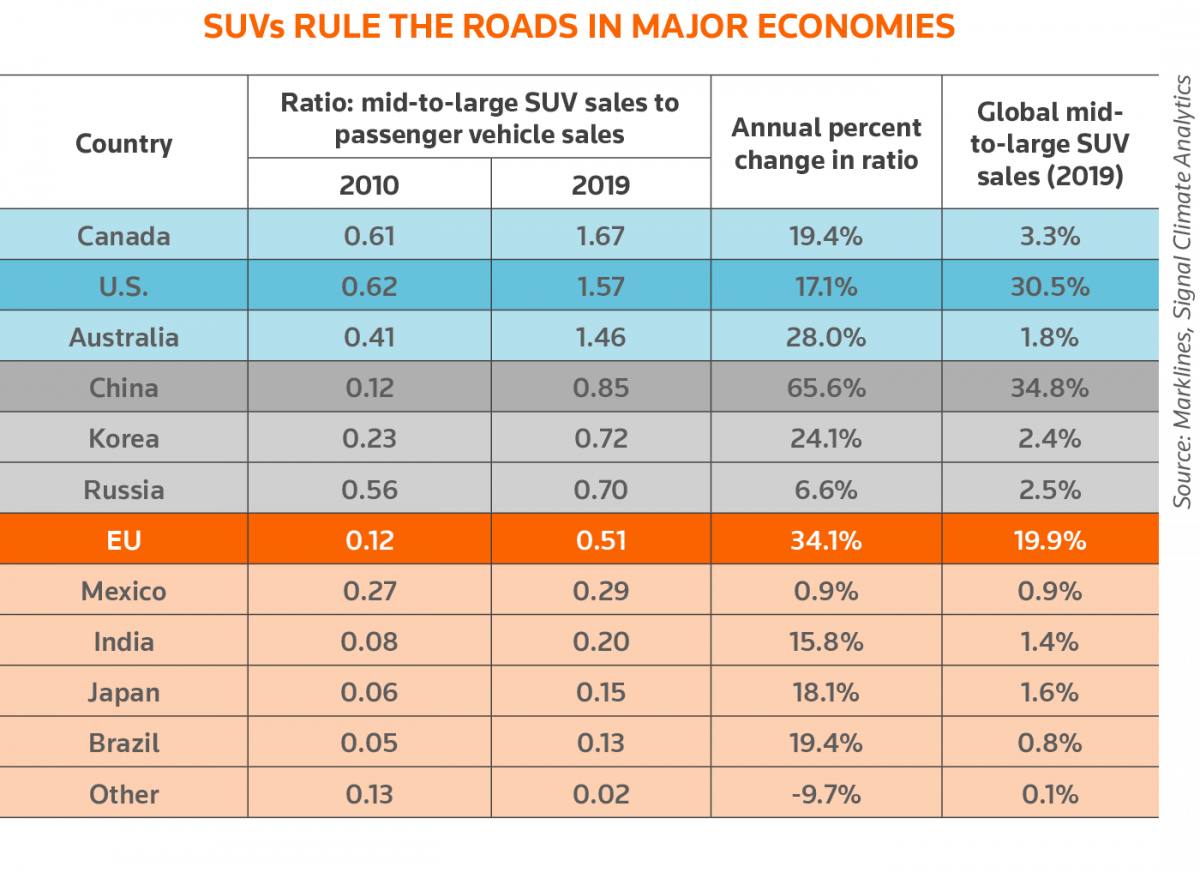 But, times are changing, driven largely by three realities. First, climate change really is coming, faster than we thought and with more devastating consequences sooner than we thought. This is reality defined by physics and chemistry, not politics, and it is influencing decision-making.  Second, electric vehicle drivers are finding EVs to be superior in just about every respect compared with fossil-fuel driven vehicles.

EVs drive better, are cleaner and are becoming cheaper. According to a new study by researchers at the University of California Davis, four out of five EV drivers surveyed in California say they would not go back to fossil fuels. The only flaws (range and charging) are rapidly being addressed.  Third, regulators, especially in the EU, are finally getting serious and making it increasingly costly for firms based or doing business there to delay transformation.

Bans of fossil fuelled vehicles in major cities are being announced, and, though years away, the transition path is clear.

Some of the auto majors saw these changes coming several years ago, and began repositioning.

Volkswagen, the largest of the auto-sector mega-fauna, is perhaps the best example, given its massive scale and current fleet, which is still 95% fossil-fuel driven cars and SUVs.

On the heels of the “dieselgate” scandal, when the carmaker was caught deploying software in 11 million diesel cars to cheat government emissions testing, VW announced investments that signal a seismic shift in priorities, with roughly 50% of spend ($86bn) over the next five years allocated to EVs and related technology. 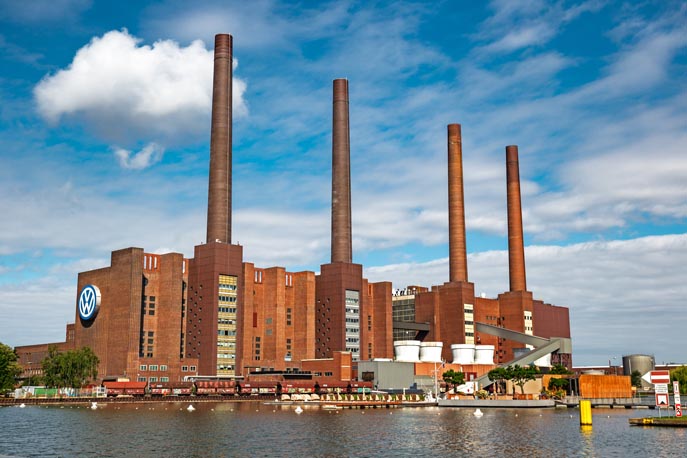 Volkswagen has allocated roughly half of its R&D over the next five years to EVs. (Credit: Pani Garmyder/Shutterstock)

In addition to Volkswagen, there are what we at Signal Climate Analytics call legacy transition opportunity leaders (companies like Daimler, and BMW, which have had aggressive growth plans for EVs over the past two years), and risers (companies like Ford, Kia, Hyundai, which have more recently made a major shift toward a more aggressive EV strategy). Both leaders and risers have seen a remarkable recovery in their shareholder performance, just as there has been a bit of a retrenchment among disruptors.

In the graph below we rank auto makers on their Sustainability Ratio™, or SR.  The ratio is a rule-based, asset-level forward looking measure of the readiness of a firm to optimise opportunity (the numerator) and minimise risk (the denominator) in making the transition to low carbon products and processes.

The legacy leaders and risers (outlined in blue in the graph below) are demonstrating, through a combination of skilled management and a motivated labour force, that they are prepared to go head to head with the disruptors.  They are currently behind – some significantly behind – but have a real advantage in knowing how to scale up.

With customer enthusiasm for EVs growing, the recent big positive swings in shareholder value among legacy automakers poised to go big with EV production may be signalling that investors and analysts are now paying close attention to the readiness of automakers to optimise the coming EV opportunity, and minimise their fossil-fuel product risks.

If that is indeed what we are seeing in these numbers, then this will be one of the first signals that the new business logic of growth and profitability through decarbonisation is beginning to factor into the value assessments. The same pattern is emerging in other carbon-intensive sectors such as energy and utilities, which will also be key to auto sector decarbonisation.

In boardrooms of the world’s oldest and best-known legacy automakers, directors have watched in awe as this new generation of automotive “disruptors”, exemplified by Tesla, have seized the imagination and capital of seasoned investors and stock market enthusiasts alike.  They have had the innovation lane all to themselves.

But the automotive “dinosaurs” can now be spotted in the rear-view mirror of those disruptors. And they are catching up, with many now staking their claims to that same piece of the road.

In the words of Jim Farley, Ford’s CEO since 2019: “The electrification of the industry is a big change, and I think it wasn’t clear until we launched Lightning and Mach E that Ford was going to be a winner in this new electric reality … Now investors are betting on Ford, and what they’re telling me is, ‘The strategy is attractive, go execute it, Farley’.”

Making an EV vehicle that draws raves from its drivers is becoming “doable” for the transition leaders and risers among the legacy automakers.  It may be that as EV production finally starts to take off, several old companies will have a chance to become the new “story” stocks, capturing a disproportionate share of the valuation gains with strategies that finally break the profit vs environment trade-off.

This article is part of the July issue of the Sustainable Business Review. See also:

ESG Watch: Insurers and airlines begin to feel the heat over climate risk

Society Watch: When it comes to cars, few are heeding t...
Why indigenous peoples are key to ensuring EV revoluti...
‘Ethical Corporation has been a beacon of light in a ...
Three ways to get the UK’s electric vehicle revolutio...
comments powered by Disqus