U.S. President Joe Biden is expected soon to reveal a strategy for conserving 30% of the nation’s land and water resources by 2030 – adding the U.S. to a list of 50 countries that are aiming to secure a global agreement for that high level of protection of nature at the Convention on Biological Diversity COP15 in Kunming later this year.

The U.S. ranks among the top five countries worldwide for total amount of remaining wilderness, but only 12% of national land has been designated as formally protected. In 2019 the Center for American Progress warned that the country lost a football field-worth of natural area every 30 seconds from 2001-2017. A continuing decline on that level would mean a South Dakota-sized loss of forests, wetlands and wild places by 2050, CAP warned.

As one of his first acts in office, Biden set up a task force to recommend a course of action for the 30x30 initiative, giving them a deadline of the end of April. He insisted that officials work with a wide range of stakeholders, including state, local, agriculture and forest landowners, fishermen, and tribal governments. 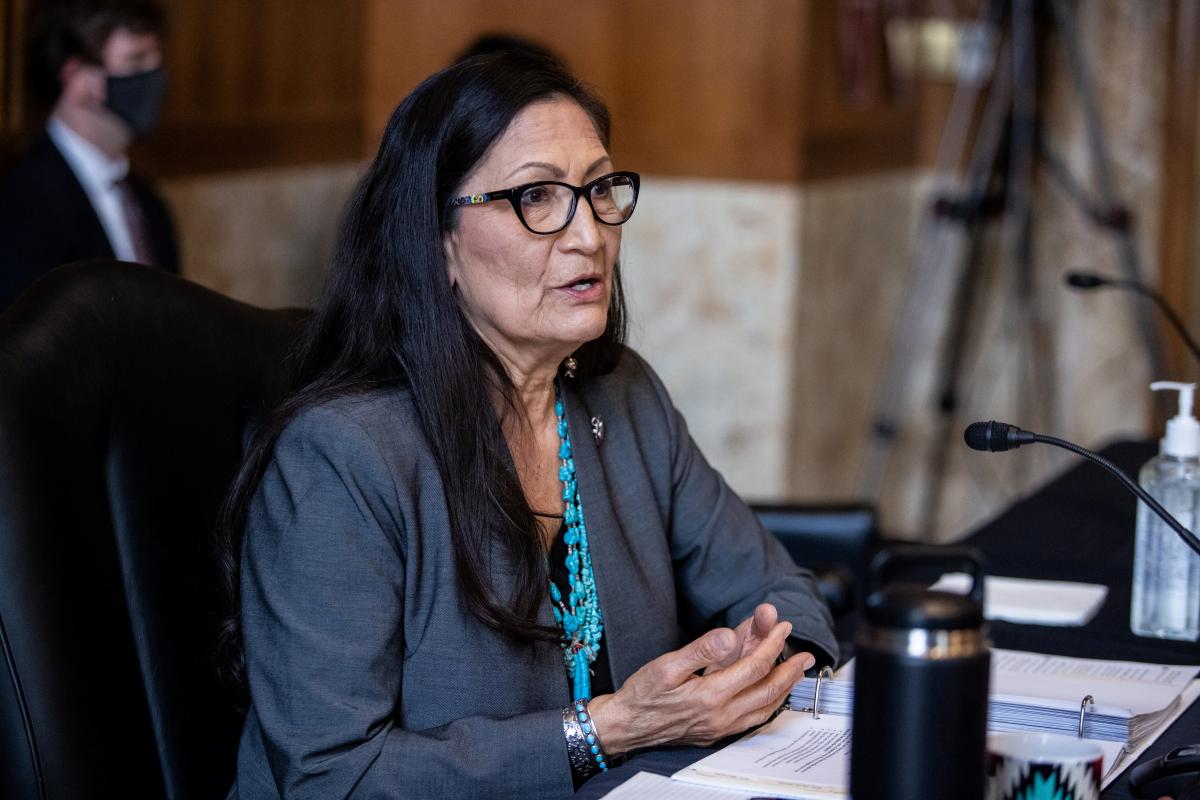 Deb Haaland is the first Native American to head the U.S. Department of the Interior. Credit: Graeme Jennings/Pool via Reuters

Significantly, Biden also nominated New Mexico Congresswoman Deb Haaland, a member of the Laguna Pueblo tribe, to be secretary of the Department of the Interior. Haaland, who last year led a 30x30 resolution calling for Native Americans to be included in the conservation and planning, is the first Native American head of the Interior department, which manages one-fifth of the land in the U.S., including national parks, wildlife refuges and tribal lands held in trust.

In a press statement, the National Resources Defense Council said the country’s indigenous peoples have “protected and managed the lands and waters for millennia” and as such, a 30x30  plan in the US should “affirm the administration’s commitment to tribal sovereignty [and] …. provide tribal communities with the funds and means to, if they wish, fulfil their vision and priorities for the stewardship of their natural and cultural resources.”

Nicole Gentile, deputy director for public lands at CAP, agrees. “All of the land that the U.S. governs and manages is essentially stolen from the Native Americans.”

Of the total 1.9 billion acres in the continental US, tribal nations have sovereign ownership of more than 56 million acres – nearly 3% of the total. According to the 2010 census, Native Americans/Alaskans make up less than 1% of the population (2.9 million people), with another 1.7% (5.2 million) who identify as Native American/Alaskan in combination with another race.

The 574 federally recognised Native American tribes in the United States also have rights to natural resources – including fish, game, and water – beyond their reservation boundaries.

Garrit Voggesser is national director of tribal partnerships at the National Wildlife Federation (NWF) in Colorado, which engages in conservation partnerships with sovereign tribal governments. 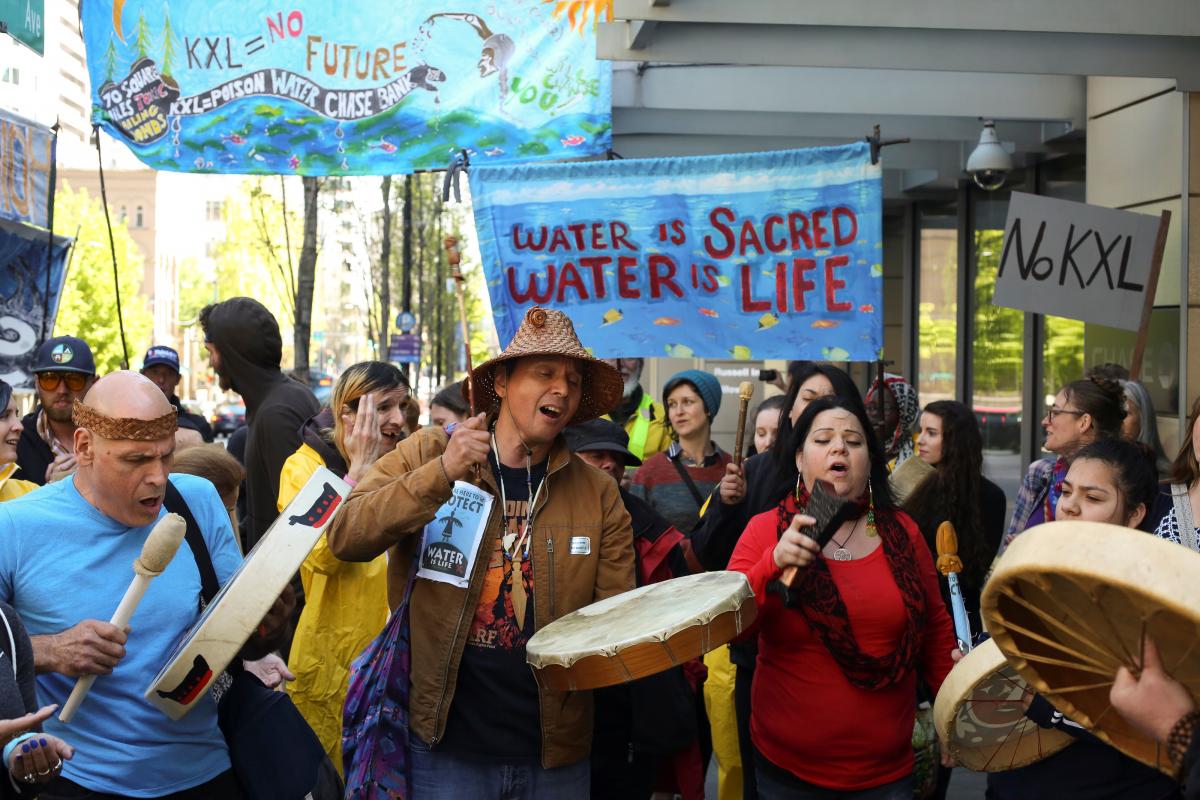 Native American leaders and climate activists join together in song outside of a Chase Bank location, to oppose the Keystone XL pipeline, in Seattle, Washington, U.S. May 8, 2017. REUTERS/David Ryder

Over the past six years, he’s noticed a “dramatic rise” in tribes voicing opposition to projects that threaten conservation, including Bears Ears and the Keystone XL Pipeline. The archeologically and culturally rich Bears Ears monument area, in south-east Utah was federally protected for all of 11 months, until former President Trump cut it back by 85% to appease uranium mining interests. Two Native American nations sued the Trump Administration, accusing it of ignoring federal land treaties and environmental studies with respect to approving the Keystone XL pipeline (Biden has frozen this approval).

Voggesser said: “The federal government has failed to recognise the contributions that the indigenous community has made to conservation; they [Native Americans] have been siloed and shut out of conversations.”

Once the ball gets rolling, I think the momentum is there to get it all together. It's going to be a force that won't be easily stopped

“There are a lot of tribes that are doing very good work on conservation and other tribes that are doing good work but don’t have the funds or expertise,” he said, noting that funding is the most pressing concern, including funding around non-tribal issues.But he noted that Biden’s proposal for the creation of a conservation civilian corps to mobilise the next generation of conservation promises to create jobs throughout the country, including for Native Americans.

Gentile of CAP says Biden’s 30x30 plan is “ambitious and visionary”, and will get traction.

“A lot of conservation ideas are things that have had a lot of support around them. They’ve been building in the grassroots for a while. So in some cases we’ll be seeing results in the media immediately,” said Gentile. “In other places, especially in places where voices haven’t been heard, it will take longer. But once the ball gets rolling, I think that the momentum is there to get it all together. It’s going to be a force that won’t be easily stopped.”