America shows how to tackle climate change from the bottom up

Michael Levitin reports on last week’s Global Climate Action Summit in San Francisco, where ambitious climate action by mayors and state governors was in the spotlight

The United States may have a president who denies the facts of climate change, but American states and cities couldn’t have been more emphatic in declaring last week that a climate emergency is upon us – and since the federal government won’t lead on solutions, US mayors, governors and businesses are.

That was the main takeaway from last week’s Global Climate Action Summit in San Francisco, whose centrepiece was a progress report on the America’s Pledge initiative, launched shortly after Trump announced he would withdraw from the Paris Agreement last year.

Backed by the US Climate Alliance, the Climate Mayors and more than 3,000 private and public sector “real economy actors” who signed the We Are Still In declaration, the pledge committed non-state actors to work towards fulfilling the US target to cut planet-warming emissions 26-28% below 2005 levels by 2025.

This movement will put us within striking distance of the goal the US set in Paris, even with zero support from our federal government

The 162-page progress report, released on the eve of the high-octane conference, showed that the US is already halfway to meeting its Paris commitments. It also outlined 10 climate strategies that cities, states and businesses can realistically take in the near term that could drive emissions down to 21% below 2005 levels by 2025, without any supporting policies by the Trump administration.

“This bottom-up movement is on a path that will put us within striking distance of the goal the US set in Paris, even with zero support from our federal government,” declared Michael Bloomberg, the former New York City mayor and UN climate change envoy, who with California Governor Jerry Brown launched the pledge last October. “We have enormous economic clout, we have the market forces at our back, and we have public opinion on our side, so I like our chances.” 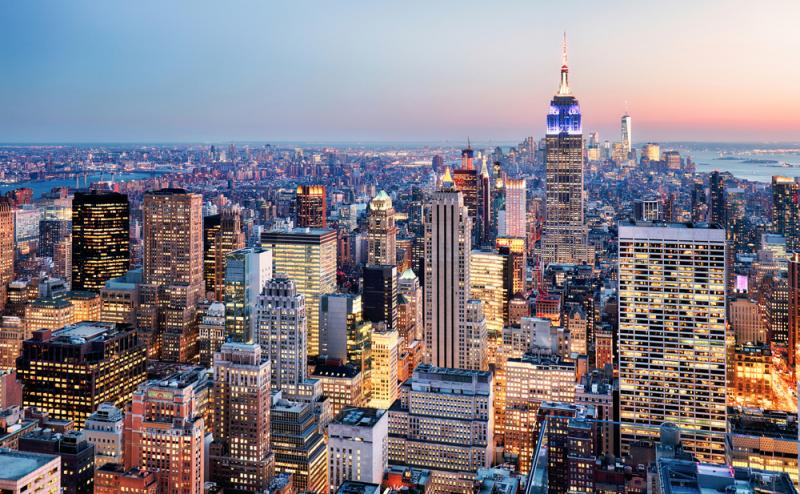 The pledge cities and states would be the world's third-largest economy. (Credit: spyarm/Shutterstock)

The cities and states in the pledge represent more than half the US population; if the group were a country, it would be the world’s third largest economy. But its commitments are being challenged by a Trump administration that has aggressively worked to deregulate methane emissions and relax motor vehicle standards on carbon emissions, among other anti-climate legislation.

“To some extent the Trump decision [on Paris] forced these actors to look at each other and say, ‘What are we doing altogether, and what does it add up to?” Paul Bodnar, managing director of the Rocky Mountain Institute and one of the authors of the progress report, told Ethical Corporation. “When states pass laws that help cities implement 100% renewable energy targets or renewable portfolio standards that are designed to help businesses, that’s where you get these really interesting, high-end results.”

Bodnar cited the emergence of green banks at the state and municipal levels across the US as evidence that business and government are working with urgent resolve to shift greater funding and resources into the renewable energy economy.

“These are publicly owned but commercially operated institutions that are resolving market failures and are able to actually make things [move] faster without using subsidies. Some of the innovation that’s taking place at the state level of finance is then providing an opportunity for additional capital to be brought in,” he added.

“Businesses are key. They comprise a lot of emissions across the entire supply chain, so there’s an opportunity for businesses based in the US to make decisions that affect emissions globally.”

One of the biggest announcements came on the eve of the summit, when Brown signed a new law requiring the Golden State, the world’s fifth largest economy, to generate 100% of its energy from renewable sources by 2045. The news was followed by a host of other ambitious government targets, as the mayors from 26 major global cities pledged to purchase only zero-emission buses by 2025, and 17 US states and territories vowed to invest $1.4 billion in carbon-neutral transport solutions. 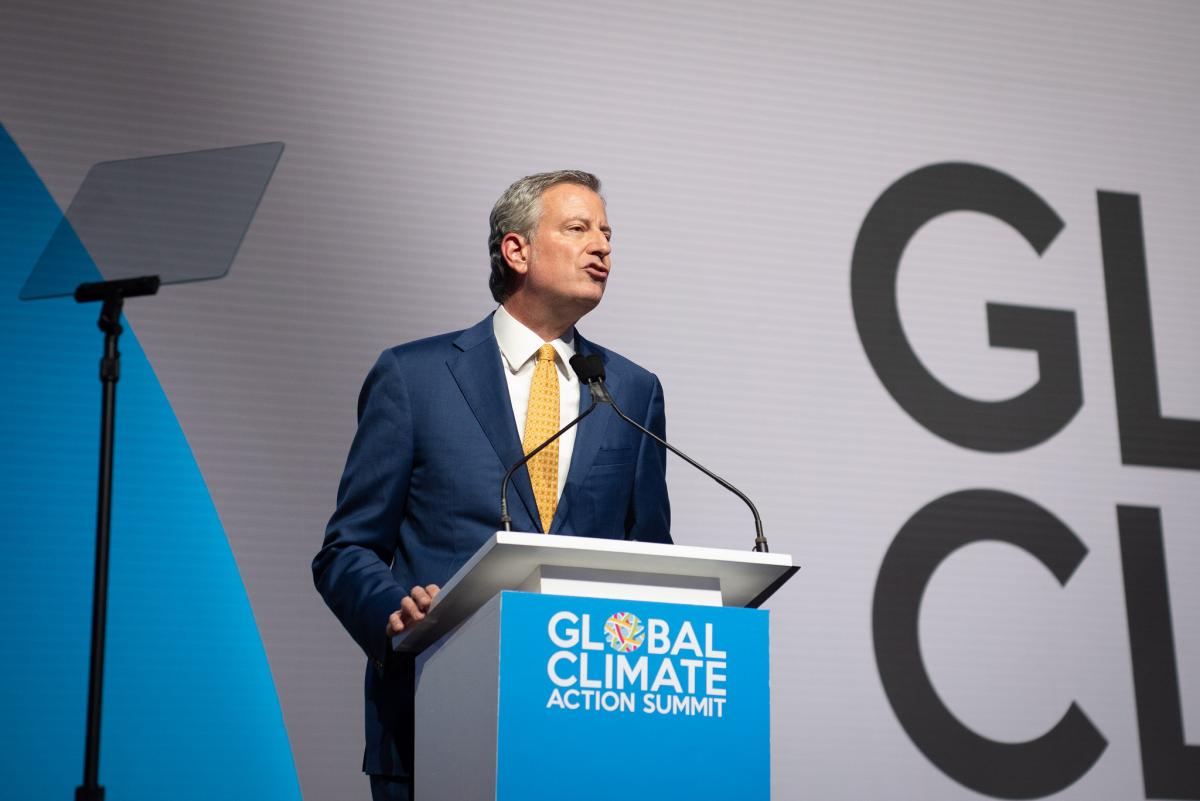 Achievements in clean transit loomed large at the summit. Los Angeles mayor Eric Garcetti, who is vice-chair, with Paris mayor Anne Hidalgo, of the C40 Cities initiative, touted the rapid progress his city had made slashing emissions from its transportation sector.

LA, which is building 15 new mass transit lines in the run-up to its hosting the 2028 Olympics, boasts the largest EV market in the nation and plans to soon have 25,000 chargers on the streets – along with all 80,000 of its city buses running carbon-neutral by 2025.

He also announced the Climate Mayors Electric Vehicle Purchasing Collaborative, a web portal to help cities get better prices on electric vehicles for fleets by buying in bulk, with commitments from 62 city and state governments and companies to establish 100% zero emission targets in their fleets. The more than two dozen companies include IKEA Group, which said it would transition to EV in Amsterdam, Los Angeles, New York, Paris, and Shanghai by 2020.

Demand for 80,000 zero emission vehicles is a hell of a signal. If you build it, we will drive it. So build them

Garcetti appealed to the car industry to step up production of EV vehicles. “Demand for 80,000 zero emission vehicles is a hell of a signal to the marketplace. If you build it, we will drive, if you build it, we will ride. So build them. And 140 million people from Milan to Mexico City, from LA to London will benefit.”

The strategy of marshalling combined purchasing power to create a market for low-carbon technologies was not confined to electric vehicles. At one of the hundreds of affiliated events going on at the same time as the summit, the World Business Council for Sustainable Development (WBCSD) launched an initiative to tackle emissions reductions in the freight and shipping industry, which is responsible for 30% of all transport-related CO2 worldwide. 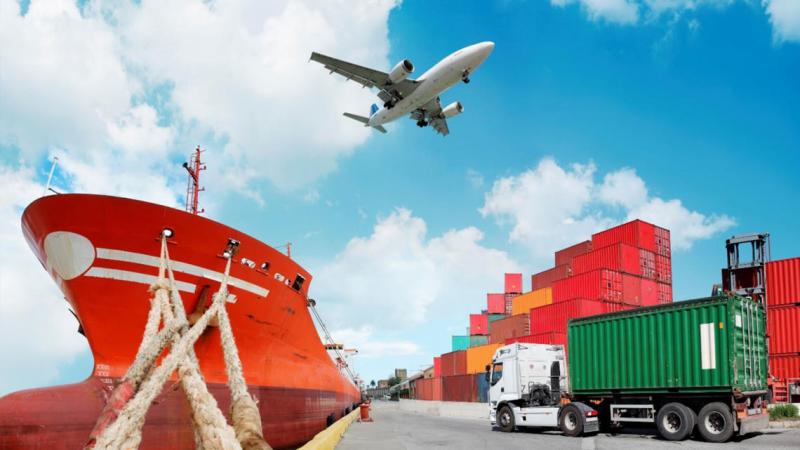 The WBCSD has launched an initiative to tackle freight industry emissions. (Credit: WBCSD)

Transforming Heavy Transport brings together more than 20 companies. Working with the We Mean Business Coalition, the companies aim to identify gaps in decarbonizing transport and encourage operators to reduce their freight emissions across the supply chain through use of new-generation fuels and other strategies.

Rasmus Valanko, the WBCSD’s director of climate and energy, told Ethical Corporation: “Walmart, Nike, H&M, they all want to go green with their shipments, and low-carbon transit is going to become a competitive advantage that you can measure in dollars. We’re leveraging the buying power of these companies to establish a new standard for greening the shipping and freight industry.”

He added that urgent action is needed to bend the curve on heavy transport emissions, with global freight traffic expected to quadruple by 2050.

“It’s so damn cheap to send stuff across the world … that we haven’t even gotten close to making freight less carbon-intensive,” Valanko said. “Ships still run on bunker fuel, we use jet kerosene for planes, and most of the trucks you see on the road are diesel. Not enough is happening to decarbonize.”

But it was city mayors and state governors who took centre stage at the summit. Washington governor Jay Inslee, one of 17 members of the US Climate Alliance Governors group, said at a press conference: “Not one single mayor, not one single county executive, not one single governor in the world has followed Donald Trump and his sinking ship over the cliff of climate denial. The 17 states in the alliance have had greater economic growth, and greater reduction of our carbon pollution, than the states that are not in the alliance.” 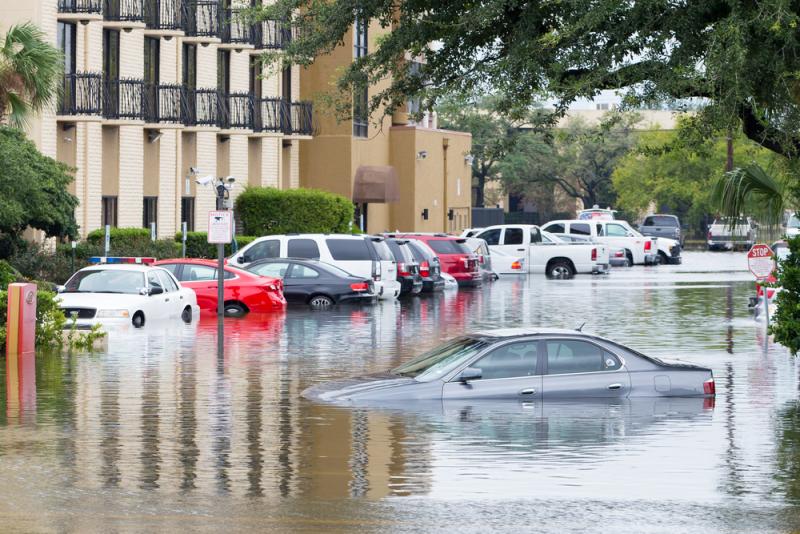 Hurricane Harvey was a 'game-changer' for Houston. (Credit: michelmond/Shutterstock)

Connecticut governor Dannel Malloy agreed. “We’ve added 94,000 jobs in Connecticut in the last seven years, and 22,000 of those jobs are in [renewables],” he said. “We don’t need leadership in Washington, DC, to make it happen. What we need is leadership in governor offices, attorney general offices, and mayoral offices.”

Among the latter was the mayor of Houston, Sylvester Turner, who pointed out that his city, despite being the centre of the US oil and gas industry, now leads all municipalities in the US in green energy use, due to the region’s booming wind market. He said devastation caused by Hurricane Harvey was a “game-changer” for the city, whose citizens have endured three “500-year” floods in the last five years.

New York City Mayor Bill de Blasio, whose city was “shaken to consciousness” by the 44 deaths and $19bn in damage caused by Hurricane Sandy six years ago, echoed the evangelical tone that had earlier been struck by former president Al Gore when he explained the city’s decision to divest from fossil fuels. “Brothers and sisters, fossil fuels belong only in one place: stranded in the ground.”

What happens in Washington still matters, and we need to vote out those who refuse to recognize reality

He also announced that the city’s five pension funds will double their investments in climate solutions to $4 billion, or 2% of their portfolios.

According to a new report from the Asset Owners Disclosure Project, the world’s largest 100 public pension funds are investing just $90bn a year in low-carbon technologies, or less than 1% of their assets, despite the UN climate secretariat’s assessment that $1.1trn a year is required to finance the green economy.

“Imagine if the top 50 US pension funds invested 2%. That would add up to $200bn, enough to convert half the homes in America to solar power and a major step towards $1trn,” De Blasio said. 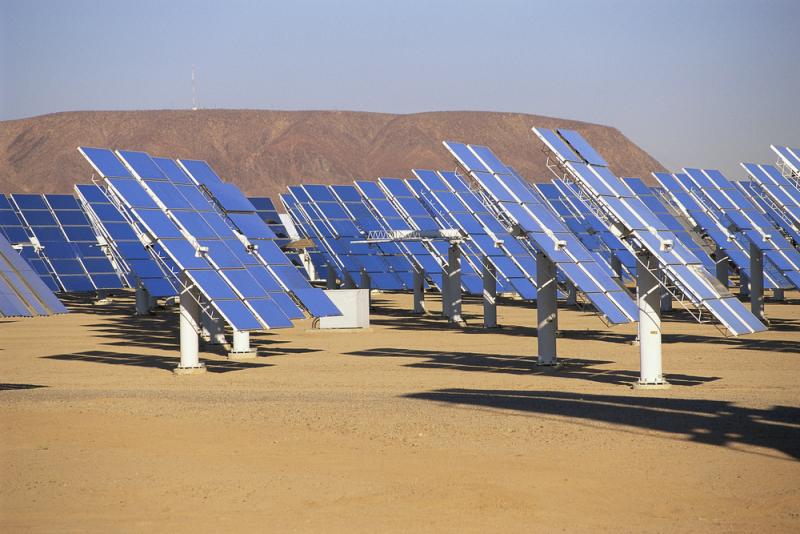 US pension funds are being urged to invest in renewable energy. (Credit: Joseph Sohm/Shutterstock)

“I’m asking pension funds across the US and around the world to join us. Pull your money out of the fossil fuel industry; put your money into the technologies that will save us all and help to break the vicious cycle that we’ve lived with for too long.”

As Jerry Brown, who co-chaired last week’s conference said: “What happens in Washington still matters, of course, and we need to vote out of office those who refuse to recognize reality. But the American people are not waiting on Washington to take action.

That kind of bottom-up leadership will continue driving progress on climate change, no matter what obstacles Washington throws in our way.”