Low-cost drone delivery: About to take-off or plummeting back to reality?

Is drone delivery on a budget just around the corner? Flytrex thinks so and wants to bring your brunch straight to your backyard 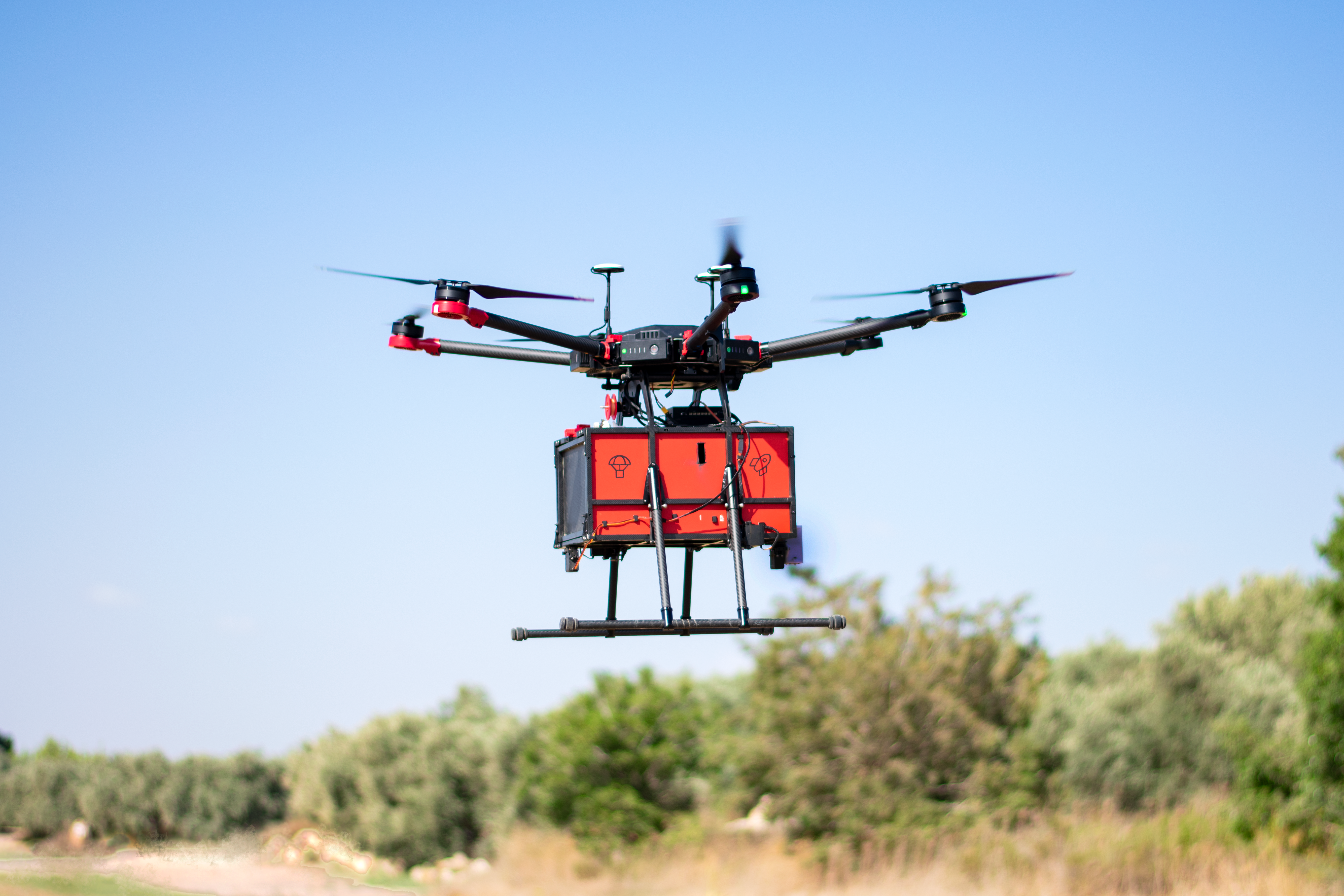 Imagine a sunny day, relaxing in the garden, but disaster has struck! You’ve run out of beer and there’s no sunscreen. However, what if you could open an app, make a few clicks and lie back until the gentle whirring overhead marks the arrival of your goods, lowered right into your lap, via drone?

One Israeli company wants to make this a reality and bring the science fiction out of the pages of a novel and into the e-commerce space within the next few years.

Flytrex’s pitch is that it has built a system that can be operated with minimal input and at low cost, whilst passing over the hurdles of FAA regulation, meaning its drones are classified in the same bracket as commercial unmanned aeroplanes.

With this formula they think they have cracked drone delivery and believe they are on the cusp of creating a system that can be scaled rapidly, creating a new era in online fulfilment.

Whereas most nascent drone delivery companies are focusing on more complex and higher margin segments of the market, such as delivering medicines in remote areas, Flytrex are focusing on “Food and retail, and this means that we have to build a very affordable system,” says Yariv Bash, Co-Founder and CEO of Flytrex. After all, “nobody's going to pay 50 bucks to get a burrito faster.”

Their initial target market is food deliveries to the suburbs of the US. This is due to two factors: An abundance of backyards to deliver to and the suburban sprawl that marks much of the American landscape. The first factor matters as each backyard provides its own landing pad in the Flytrex system. “We hover up to 30 metres above your backyard and lower the package gently on a wire to the ground and automatically release it” explains Bash.

To get your taco that weighs 200 grams, you have to move a one-ton car with a person weighing 80 kilos inside to get you your dinner. It sounds crazy when you think about that

The second is key to where he see a drone having a natural advantage, as in this suburban environment “Using human couriers is a lot harder because the population density and restaurant density are a lot lower.”

In these situations, Bash believes their drones offer “A much better solution. We can carry up to three kilograms of payload, which is a typical dinner for a US family in the suburbs,” and a delivery size that they see as lacking sustainability and uneconomical through the current modes of transport. “To get your taco that weighs 200 grams, you have to move a one-ton car with a person weighing 80 kilos inside to get you your dinner. It sounds crazy when you think about that,” he says.

The other edge is in terms of gratification and meeting a consumer increasingly used to Amazon-levels of convenience. “Our vision is what we like to call the future of instant gratification. So, 20 years ago, we logged on to Amazon.com, you added items to your cart, and once you had enough items you clicked checkout, and you paid, because you cared about delivery. Delivery was costing you money and it took time. Today, nobody clicks ‘add to cart’ and [everyone] just clicks ‘buy now’.

“We expect drones to enable on-demand deliveries to become transparent. So, if you need tomatoes for dinner, just get tomatoes. If you need a bottle of wine for the visitors, just get a bottle of wine.” In his imagined near-future, “You won't have your own grocery list and actually have to drive there every week to get all your groceries or wait until you have enough to justify the delivery costs and the synchronisation on when the deliveries will arrive. Just click ‘buy now’ and get it in 60 minutes or less.”

The reason that Flytrex is flying solo in this area is that it is a tricky proposition to bring the cost per delivery down into a feasible range. “You can't use a Mercedes to deliver your pizza. It doesn't work that way. So, the key here was to design a system meant for back-up deliveries that can perform a delivery for a few dollars. In the future we estimate it will be even less,” expects Bash.

This meant “A lot of out of the box thinking about your technology, about your drones, the entire system, [and] the concept of operations. How do you use the operators? You need the humans, [but] you need them in a very optimized way. And how do you structure it in a way that justifies using very safe and efficient robots to replace humans that usually receive minimum wage?”

Therefore, they’ve rethought the system from the ground up, and not only “Made the drones as simple as possible, so it won't be the most expensive part of the system,” but also invested heavily into the cloud system to reduce cost and create scalability.

All an operator has to do is install a package and press the green button on a tablet, and that's it

This level of automation and remote computing power is critical to make this kind of approach work, as it is impossible for each drone to be directly operated by an individual. Instead, each human in the system has to be optimised through supporting technology and the system has to have a very high degree of autonomy.

“All an operator has to do is install a package and press the green button on a tablet, and that's it. Everything else is done automatically. The system is completely autonomous,” says Bash. “There's no virtual copy, there's no joystick. Our operators aren't even certified to mark a point on a map. Everything is done automatically [and] is pre-surveyed. All you have to do as an end-customer is input your home address and your credit card and we take it from there. The system already knows how to translate your home address to the right XYZ point in your backyard.”

You just bring a few drones, a tablet, and the system is good to go. You don't need any kind of infrastructure

“It really is an entire solution. We do the fleet management and maintenance, the delivery, the logistics - everything is done over the cloud on a certified system,” he emphasises, where “you can throw it anywhere and deploy it really easily. You just bring a few drones, a tablet, and the system is good to go. You don't need any kind of infrastructure.”

Getting cleared for take-off

Bash is at pains to point out that this approach has been critical, as it allows them to meet stringent requirements from aviation regulation bodies and, once those hurdles are cleared, make the absolute most out of the open ground beyond.

“We're going through all the hoops that the FAA throws at you if you're trying to certify an unmanned airplane” says Bash, and those hoops are particularly hard to jump through.

Bash pulls out an extremely thick binder and waves it at the camera. “This” he explains “is, for instance, my maintenance manual. Five hundred pages long. Everything down to the bolts, to the schematic. This is what it takes if you want to certify a system, and the FAA has gone over every line in this document.”

Such is the level of detail that Bash noted that he doesn’t think “That the drone can't carry all the documentation that we've created for it.” Indeed, Flytrex had to ask for a waiver so the drones wouldn’t have to carry the documentation aboard, which is typical for a normal commercial aircraft. “It really doesn't matter if you're Flytrex from Israel, or Amazon from Seattle, or Google from California. Getting that certification takes between three and five years, and we know that because we've been doing beyond visual line-of-sight flights in Reykjavik in Iceland for four years now, flying above the city,” explains Bash.

So, why go to all this effort? Simply put, passing this high standard gives them the opportunity to operate almost anywhere.

“Once we have our commercial-type certification in the United States, that certification is easily adoptable anywhere else in the world, because all the different civil aviation authorities all over the world recognise the FAA as a leading Certification Authority.”

Deploying into the real world

Now the end is in sight when it comes to the official certification, where is Flytrex looking to make their mark on the last mile delivery sector?

“We're already working with Walmart in North Carolina, we have a few other brand names that have signed and are already negotiating contracts with us,” notes Bash, but the real aim is to go large after FAA approval.

“We should be getting our [flight] certification later this year and then we can go on a national scale. You can just start deploying your stations all over the US. The aviation regulations are federal, so it's not going to be a state-by-state regulatory approval.”

By the third or fourth time, they really don't care that it's a drone

Therefore they “Believe that by the end of the year, we will start seeing drone deliveries for real at least in several areas of North Carolina, and maybe a glimpse in a few other states as well in the US.”

In the end, the goal for this ambitious Israeli company is to be ubiquitous and Bash thinks that the consumer is going to jump on the possibility of an hour-or-less delivery via drone to the extent that it is normalised in just a few years. There is huge excitement on the first delivery, he says, but “By the third or fourth time, they really don't care that it's a drone. They just get a notification on the app telling them that the drone left the package in the backyard and they can go outside and pick it up. [The consumers] are not [using drones] because it's a novelty, they're doing that because it's a lot more affordable and basically easier for them.”