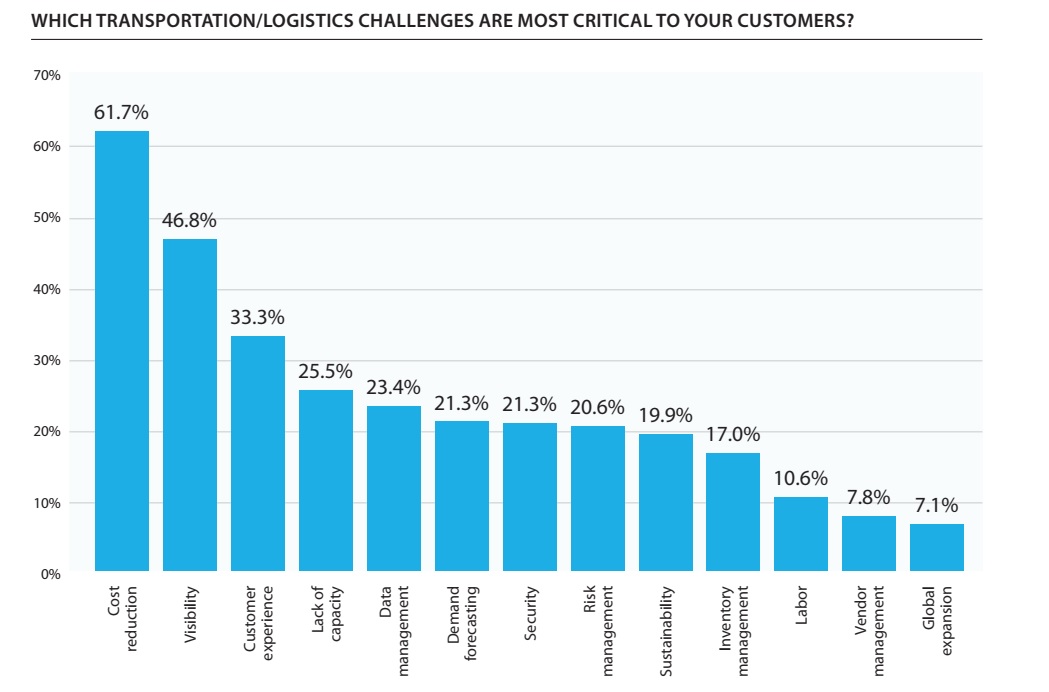 Logistics Service Providers (LSPs) said in the survey conducted for the report that the most important logistical challenge by far for their customers was in reducing costs, at 61.7%

Companies at all stages of the supply chain are expecting rising costs in 2019, says eyefortransport’s new Supply Chain Hot Trends 2019 report, which is free to download now. Rising costs are being driven by exponential growth in an e-commerce environment that increasingly crosses borders even whilst trade barriers are rising and availability of labour continues to reach new lows.

Logistics Service Providers (LSPs) said in the survey conducted for the report that the most important logistical challenge by far for their customers was in reducing costs, at 61.7%. This was followed by visibility issues (46.8%) and achieving a good customer experience (33.3%). The percentage of LSPs that also said that the costs of cross-border trade were set to rise was extremely high, at 83.2% of respondents.

This comes as the logistical burden, especially in the last mile, is expected to rise as the share of e-commerce as a percentage of sales is predicted to soar 15 percentage points in the next 15 years according to retailers in the survey.

Despite this, it seems there is not enough preparation ongoing, as when retailers and manufacturers were asked what strategies they had to handle seasonal and promotional peaks, by far their greatest go-to is to hire temporary workers, which is used by just under two-thirds of respondents. This tactic will struggle in the context of current labour shortages.

Availability of truck drivers was one of the first areas where the labour shortage began to become apparent. A report from late 2018 estimated that in just the UK, Germany, France, Denmark Sweden and Norway there was a shortage of nearly 130,000 drivers. Furthermore, the report notes that: “In Germany, the DSLV transport union reports that in the next 15 years, two-thirds of drivers will retire. Germany is facing a shortage of 45,000 truck drivers, with around 30,000 leaving the profession every year. This compares with only 2,000 people receiving truck-driving qualifications each year.”

The US is facing similar issues, where there was an estimated shortfall of more than 50,000 drivers in mid-2018, a situation that has likely grown more acute since.

Now the labour shortage is industry-wide and not just in professional areas where skills or professional certification is required. Real estate firm CBRE estimated that in the UK distribution centres would need to hire 226,000 workers in both 2018 and 2019 in order to maintain staffing levels that match growth in demand. Put simply, there aren’t that many workers available to pick up the slack.

The most popular methods for reducing costs are simple but effective methods in the form of optimising packets sizes (34.2%) and using fixed scheduled delivery routes (32.9%). Using brick-and-mortar stores is also a popular means to try and reduce costs, being used by 27.6% of retailers, brands and manufacturers in the survey. Given the immense pressures to make deliveries in specific time slots in a more cost-intensive environment in 2019, brands may need to branch out the means they use to bring down costs. They may need to move to more agile delivery systems and routes and look at more routes between the customer and the brand that can provide convenience as well as reduce costs, such as crowdsourcing deliveries.

“We are also testing an asset-light models with ‘Parcel Metro’. So, that is technology-based. We connect the seller with the buyer through a crowdsourced delivery model,” said Charles Brewer, CEO, DHL eCommerce. “We have been up and running with that model for about a year, to a year-and-a-half. We started testing in the US in Chicago. We now operate that in five cities in the US and we have plans to launch in many more. We very recently took the same Parcel Metro product and launched it in Southeast Asia – in Vietnam and Thailand. We will launch it across the rest of Southeast Asia shortly.”

This report gathers together the top trends across the industry from the opinions of more than 750 industry thought leaders. In it you can find: