How will the Brexit decision affect supply chains?

In a vote that has rocked the world, the UK has decided to leave the European Union. The recent aftermath of this decision has been brutal for the British Pound and the uncertainty of what it all means has folks wondering what will happen next. 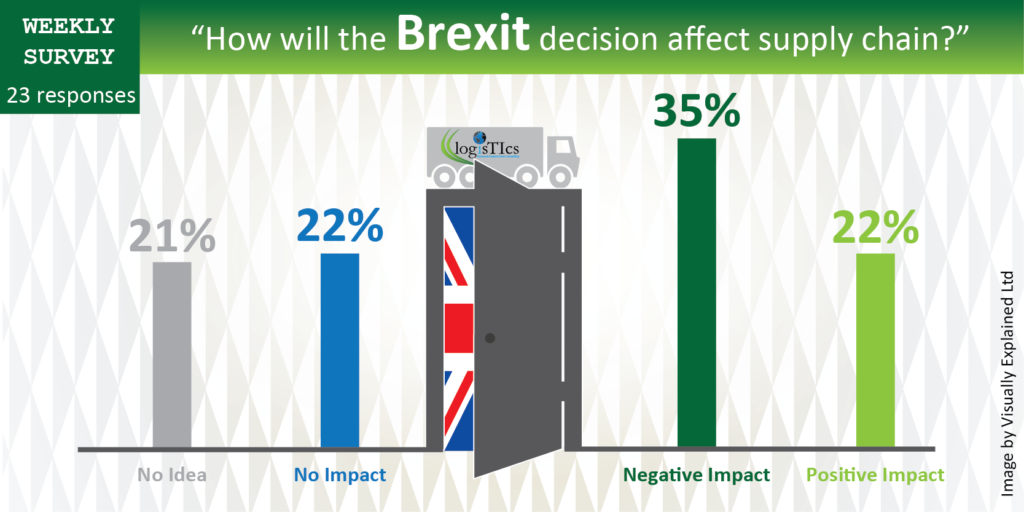 While it could take up to two years for the UK to completely leave the European Union, businesses are digesting and assessing the enormity of the situation. For many businesses such as the financial and automotive industries, the UK has been viewed as a launchpad to the European continent. Will this continue or will industries move to another location? Will the growth of cross-border e-commerce be curtailed? With over 50% of its trade tied to the European Union, what will the break up mean for trade and supply chains?
In our latest Twitter #WeekendSurvey, we asked, “How will the Brexit decision affect supply chains?” Not surprisingly, the results were close with ‘negative impact’ edging out the responses with 35% of the votes.  It is indeed too early to determine the true impact but the immediate thought is that customs regulations and taxes will need to change; hence, it could be more expensive to import goods into the UK market once the country separates. Likewise, trade with its biggest trade partner, the European Union, will change and the costs could increase to export goods to the continent. Domestic logistics costs could also possibly increase and deter global companies from moving manufacturing operations to the company or for those already that do have operations, to rethink their manufacturing operations within the country. However, another thought could be that the British Pound declines to a level that makes the country more inviting as a manufacturing hub. In addition, the UK will need to renegotiate trade agreements and the results could possibly be more favorable for the country.
The survey respondents that indicated no idea or no impact represent all the uncertainty surrounding this decision. In times of uncertainty, companies need to plan accordingly and have a plan in place to mitigate any potential risk that may occur. Two years may seem like a long time but it isn’t and companies need to plan now.
comments powered by Disqus