The Fear Trade Picks Up Steam - Don't Be Fooled

One of my favorite songs from childhood is "Won't Be Fooled Again" by The Who and this is my theme for what I have called the "fear trade" in transportation. This is the time of year when people put their freight out to bid and as expected, and right on queue, some of the major transportation providers are putting out press releases and other statements to start the fear trade - make shippers fearful that truck capacity is magically disappearing and that trucking companies are suffering.

As reported in LogisticsViewpoints, both Schneider and Werner have, on queue and somewhat coordinated, put out press releases and statements saying there is a big problem with capacity, productivity is down and the big bad regulations are making it hard to run their business. This will, I predict, be echoed by many others over the next few days. All while earnings at the best run trucking companies are better than they have ever been and OR rates are at record levels (the REAL data in their annual reports).

These statements, of course, are designed to create the fear trade and to get the shippers to buy into a "fear premium" as they go into bid season.  Now, for the real data:

Using CASS data from the October report we see that both expenditures and shipments are down year over year. In fact in 7 months of 2013 we have seen shipments down year over year which indicates, as CASS rightfully points out, that the economy is slowing and the shippers are finding alternative ways to deal with transportation problems (i.e., network redesigns, packaging, better inventory management etc.). During these turbulent times it appears shippers have rolled up their sleeves to find innovative ways to solve transportation problems and it appears the transportation industry is issuing press releases. The graphs below tell the story: 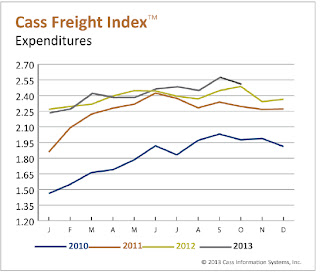 As I reported recently, I told my readers not to overreact to the numbers from September. They were too strong to be sustained and if you see any other economic indicators you will know that strength was not supported by the underlying economy. And, this month we find that to be accurate. They were not supported.

Another interesting statement out of the CASS reporting was that for the first time since 2008 the National Retail Foundation is forecasting a decrease in holiday sales by 2.5% and this is supported by the less than robust holiday stocking. 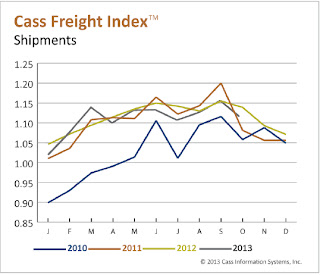 For sure I am not saying to ignore capacity - if you claim the world is going to end and you live long enough, sooner or later you will be right. However what I am saying is three-fold:

1.  Let the data speak.  Don't get wrapped up in the fear trade. Watch this blog, watch the CASS information, watch macro economics and, of course, watch your own sales as a shipper. These are the most telling indicators.

2. Look at your network and understand your network relative to freight flows. I have said it many times that transportation is not a homogeneous network. There are specific lanes (Northbound out of Mexico as an example) that are always under stress. However, if you ship westbound you should be getting great deals almost always.

3. Understand that there is another side of the equation and that is demand. Shippers have done an incredible job of productivity enhancements through packaging, product design, loadability studies, and network design which has allowed them to service their customers with higher quality goods at lower costs and lower transportation requirements. There is no reason to think this will stop.