For the fiscal quarter ending February 28, the good news was that FedEx reported revenue increases in each of its divisions. While total revenue increased 4% to $11bn, operating income plummeted 28% to $589m. 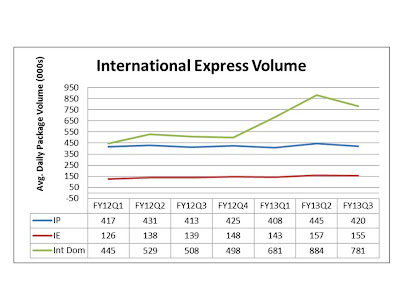 Capacity remains an issue as the company noted in its earnings press release that it plans to decrease capacity to and from Asia and “aggressively manage traffic flows to place low yielding traffic in lower cost networks.”
Domestically, US Express package revenue was $2.8bn, representing almost no change when compared to same period the previous year. Average daily volume changed little when compared to the same period the previous year as well. Clearly, there is very little growth in the US market, hence, the company’s plan to retool its domestic network.
For its two other divisions, FedEx Ground reported revenue of $2.7bn, an 11% increase. Like previous quarters, the increase was due to the growth in ecommerce and its SmartPost offering.  SmartPost average daily volume increased 26%.  Operating income increased slightly while operating margin was 17% compared to 18.8% from same period the previous year.
FedEx Freight revenue increased ever so slightly to $1.2bn, however, the good news for this division is that its operating income was $4m compared to a $1m loss from the same period the previous year.
As mentioned previously in this brief, FedEx is working to right-size its network and noted "In early February, a number of officers and managing directors, primarily at FedEx Services and FedEx Express, accepted voluntary buyouts, and on February 15, thousands more team members were notified of their eligibility for the buyout program. This program is one of the first steps in a process that will help FedEx Express achieve necessary cost structure reductions and improved efficiency."
It seems not only the global economy is affecting FedEx earnings but also the shift away from the use of airfreight as well as global tradelane shifts. Interesting to note that on the same day the company announced plans to reduce capacity on the transpacific tradelane, DHL made an announcement that it was adding capacity in Penang, Malaysia that will also connect to its Hong Kong to Los Angeles lane.
comments powered by Disqus