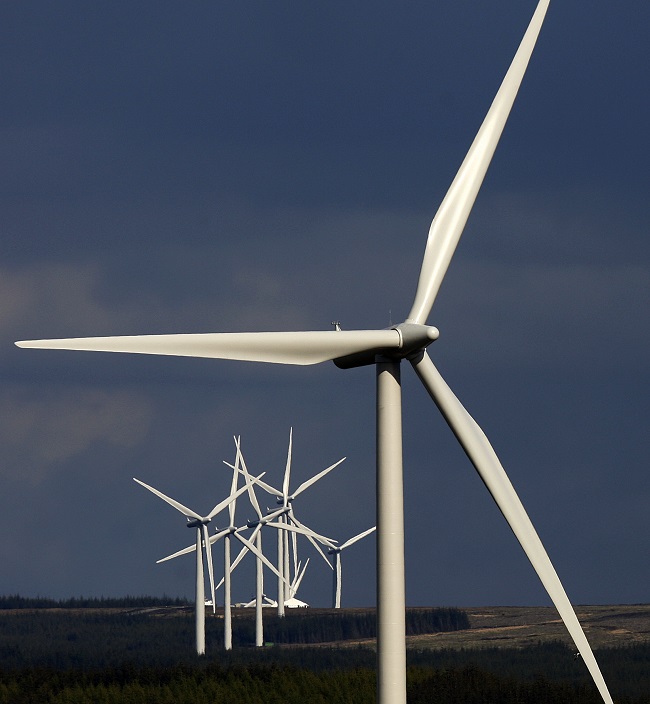 The UK government is looking to reignite onshore wind deployment after the removal of subsidies set back the sector. (Image: REUTERS/David Moir)

The proposals by Kwarteng's Department for Business Energy and Industrial Strategy (BEIS) form part of the Conservative government's delayed white paper on energy security and include an almost four-fold increase in solar power to 50 GW, the FT said, citing people close to the process.

Last year, the government opened up contract for difference (CFD) subsidies to onshore wind and solar power for the first time since 2015. Prime Minister Boris Johnson pledged to decarbonise UK power supply by 2035, requiring a rapid acceleration in renewable energy capacity. Onshore wind installations must double to 1.3 GW/year to reach a capacity of 35 GW by 2035, according to the Climate Change Committee (CCC) that advises the government. Solar and offshore wind capacity may need to reach 54 GW and 45 GW respectively, four times the current level, while battery storage capacity will need to hit 18 MW, it said. The energy security white paper has been delayed by several weeks due to concerns from the Treasury over the cost of approving six or more new nuclear power stations proposed in the strategy, the FT reported.

The European Union (EU) has filed its first challenge against the UK to the World Trade Organisation (WTO), over offshore wind auction rules which favour domestic suppliers.

UK offshore wind activity is soaring and auctions for state subsidies require developers to source a certain amount of content from domestic companies.

"This violates the WTO’s core tenet that imports must be able to compete on an equal footing with domestic products and harms EU suppliers, including many [small and medium-sized enterprises], in the green energy sector," the European Commission (EC), the EU division responsible for trade policy, said.

The criteria also increase project costs and slow down renewable energy deployment, it said. The WTO filing is the first by the EU against the UK since Brexit. The UK has set a target of 40 GW of offshore wind capacity by 2030, four times the capacity installed in 2020, and this could be further increased under expanded renewable energy plans proposed by the energy ministry.

"The EU has raised its concerns with the UK on several occasions, but to no avail," the EC said.

The EU has filed a dispute settlement consultation to the WTO and if no satisfactory solution is found within 60 days the EU can request the WTO sets up a panel to rule on the matter, it said.

The projects will be due online around 2026 and help Portugal increase its share of renewable energy to 80% of electricity generation by 2030, Matos Fernandes said in an interview. The southwest European country already gets 60% of its power from renewables, including 7.3 GW of hydroelectric capacity and 5.6 GW of onshore wind.

"Portugal wants to become a major exporter of renewable energy in the future and therefore has to bet on wind offshore," the minister said.

Portugal currently hosts the 25 MW WindFloat Atlantic (WFA) floating wind farm but is yet to install commercial-scale projects off its long Atlantic coastline.

The UK, France and Spain are also rolling out tenders for large-scale floating wind projects.

Scotland allocated 15 GW of leases in January as developers race to gain a foothold in the emerging floating wind market.