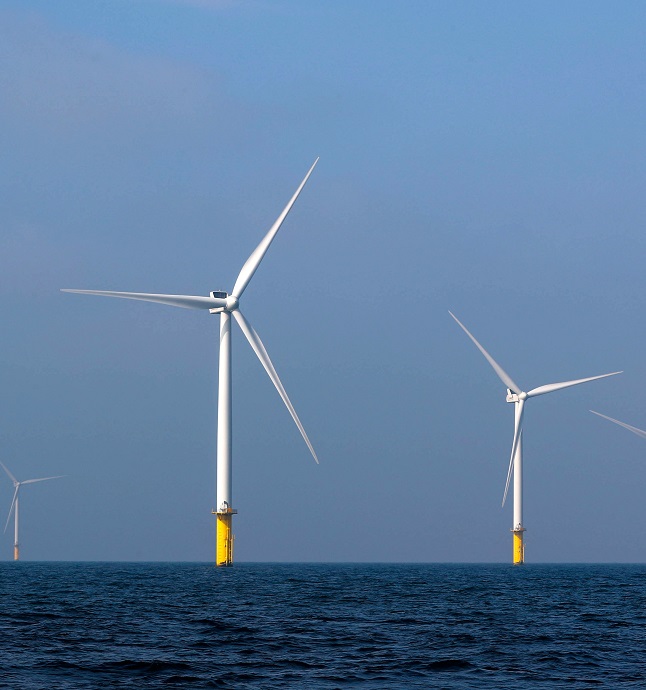 France is lagging behind other countries on offshore wind permitting and only recently started installing its first large array. (Image: REUTERS/Yves Herman)

The clearer outlook provided by the sector deal will help attract offshore wind investors but permitting and grid challenges remain and competition for suppliers is intensifying as other countries set higher targets.

France has allocated only 3.5 GW of projects to date, whereas the UK had installed 10 GW by 2020 and aims to install 50 GW by 2030. Projects in France that are close to completion include Iberdrola’s 496 MW Saint-Brieuc project in Brittany, due on stream in 2023, and two wind farms for 992 MW near Dieppe and Le Treport being developed by Ocean Winds, a joint venture of EDP Renewables and Engie.

A slow buildout of offshore wind regulation in France has led to project timelines around 10 to 12 years for the first large projects, Marc Hirt, Country Manager France for Ocean Winds, told Reuters Events. Awarded back in 2014, the Dieppe and Le Treport projects are currently in the construction preparation phase and due online in 2025.

Developers in France have faced administrative delays, tariff changes, and legal challenges. Unlike North Sea states, France built a regulatory framework for offshore wind from scratch and there has been strong opposition from local fishermen and other groups.

Government authorities have managed to shorten the process to around seven years, but this is still longer than in neighbouring countries, Hirt noted. Meanwhile other nations are streamlining permitting further as they accelerate renewables to improve energy security and mitigate soaring gas prices.

Last month, the UK government pledged to shorten the offshore wind approval process from four years to one year and the European Commission is expected to publish legislation that accelerates renewables permitting in the coming weeks.

France has faced less pressure to deploy renewables than many nations as it generates around three quarters of its power from nuclear plants. France also has a limited sea area suitable for fixed-bottom technologies and is already better positioned in the emerging floating wind market where it can capitalise on deep-water sites.

Forecast offshore installations in Europe in 2022-2026 Complex permitting procedures have been compounded by legal actions against permit authorisations, he said. "The operators cannot launch the construction with the risks of cancellation induced by pending legal decisions."

For example, Iberdrola’s Saint-Brieuc project has faced a number of legal actions from local campaign groups. In December 2020, the company won an appeal in France's Council of State against legal action which was reportedly filed in opposition to a switch from Adwen turbines to Siemens Gamesa models.

"The main issue here is also the long time needed," he said.

Offshore wind grids become increasingly important as more projects are brought online and grid operators in Europe and the U.S. are planning offshore networks to reduce development costs and minimise the impact on coastal regions.

The government aims to quadruple the number of offshore wind workers to 20,000 by 2035 but France will need to offer competitive terms to companies as other offshore wind nations like the UK also seek to secure foreign investments.

"In particular, the adaptation of ports and the supply chain require long term investments,” Hirt noted.

“On the local content requirements France should tread carefully," Giles Dickson, CEO of industry group WindEurope, said in a statement. "It is good the requirements are not legally binding – that would risk leading to higher costs and slowing down investment."

"On the contrary, developing French and European industrial capacities, like has already been the case for example for wind turbines...is a way to reinforce competitivity and to limit the risks created by a too high dependency on certain countries," Hirt said. The impact of the war in Ukraine on global supply markets has highlighted these risks.

France is also scaling up its floating wind farm tenders and this could lead to separate supply chains on the Atlantic and Mediterranean coasts .

Separate supply chains would likely be developed in France to serve the Atlantic and Mediterranean projects as well as "other markets in [the] respective sea basins,” he said.