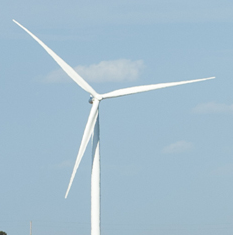 Wind power is increasing its time in the spotlight in recent weeks when it comes to new power generation in the US. Specifically, five wind farms in Colorado, Kansas, Michigan, Nebraska, and Texas came on line last month, accounting for 574 MW of new capacity.

In addition, seven "units" of biomass (102 MW) and five units of solar (31 MW) came into service accounting for 12.16% and 3.69% of new capacity respectively. The balance came from three units of natural gas (132 MW - 15.73%).
Moreover, for the eighth time in the past ten months, renewable energy sources (i.e., biomass, geothermal, hydropower, solar, wind) accounted for the majority of new U.S. electrical generation brought into service. Natural gas took the lead in the other two months (April and August), according to FERC.

"Congress is debating whether to renew the production tax credit for wind and other renewable energy sources," noted Ken Bossong, Executive Director of the SUN DAY Campaign. "The continued rapid growth of these technologies confirms that the PTC has proven to be a very sound investment."