The winners for the 2015 Inaugural Wind Energy Update (WEU) O&M Excellence Awards were announced at the 7th Wind Operations and Maintenance Summit in Dallas last week. 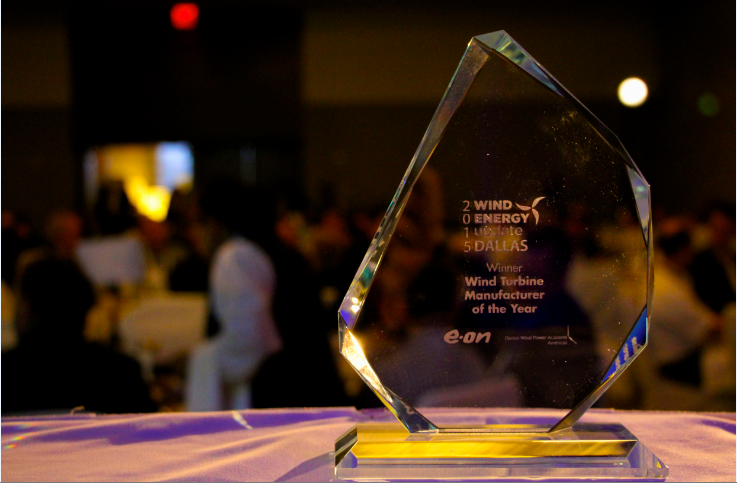 For the first time, the WEU O&M Excellence Awards, sponsored by E.ON and Danish Wind Power Academy (DWPA), bought together the wind energy industry to celebrate excellence, outstanding achievements and contributions in the evolving O&M sector.

Nominations opened to the wind energy industry in February encouraging all industry players to take part – over 100 nominations were submitted in total for the 6 different categories. The entries were put to an expert panel of industry judges including decision makers from UVIG, Sandia National Lab, Make Consulting and DNV GL.

The judges selected the top 3 entries for each category that became the 2015 finalists, the 400+ Wind O&M Summit attendees then cast their votes at the event and winners were announced at the dinner and awards ceremony in Dallas.

Keith Day, President of E.ON Energy Services said in his opening speech; “when thinking about the purpose of tonight’s awards it’s not just about the plaque or the chance to make an acceptance speech – it’s about perseverance and lifting the wind industry to new heights of reliable and optimum performance in the increasingly competitive generation market that we all face”.

Carsten Lind Anderson, CEO of DWPA, added that “we supported this event because it is important that we mature the industry and that we present results and ability – so this is really a chance to celebrate the winners that have been selected by the North American wind industry and recognized as providing an excellent service.”

For more information on how to gain access to presentation materials and the 2015 Asset Management Report please visit the website: http://windenergyupdate.com/operations-maintenance-usa or contact the project director Elizabeth Demestiha at elizabeth@windenergyupdate.com