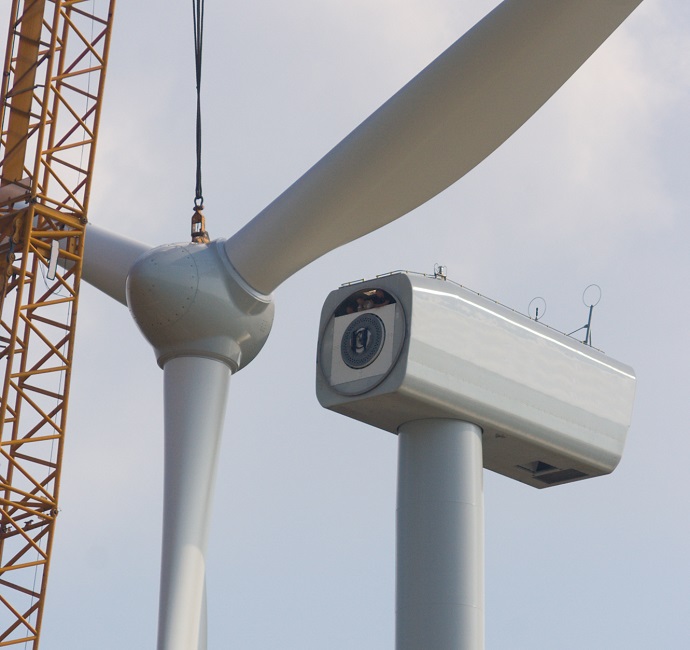 US first-quarter wind installations at highest level since 2009

New installed capacity was higher than in the entire January-September period of last year, AWEA noted. The U.S. installed 8.7 GW of utility-scale wind generation in 2016, accounting for 60% of total capacity additions.

Texas installed the most capacity in Q1 2017, adding 724 MW for a total installed capacity of 21 GW. Kansas was in second place last quarter, installing 481 MW. Deployment was widespread, with new installations in states such as Rhode Island, North Carolina, Oregon and Hawaii, AWEA said.

Total U.S. wind capacity was 82.1 GW at the start of 2017 and wind turbines provide 8% of U.S. generating capacity, more than any other renewable energy source.

The wind industry is currently on track to supply 10% of US electricity by 2020, according to AWEA.

The U.S. now hosts around 500 factories supplying the wind power industry supply chain. By the end of President Trump’s current four-year term, American wind power will support over 248,000 wind-related jobs, according to a recent study by Navigant Consulting.

DONG Energy submitted six projects in Germany's offshore wind tender and won three project allocations for a total capacity of 590 MW. The zero price bids applied to the 240 MW OWP West and Borkum Riffgrund West 2 projects, while the company won a concession for the 110 MW Gode Wind 3 project at a bid price of 60 euros/MWh. ENBW won the concession to build its 900 MW He Dreiht project, also at unsubsidized prices, the company said.

DONG Energy plans to combine OWP West and Borkum Riffgrund West 2 into one large-scale project and could add additional volume in next year’s German auction to further increase the total size of the project, the company said in its statement.

The zero bid prices will expose the projects to wholesale market prices when they are completed. DONG Energy plans to complete its projects by 2024 and will make a final investment decision (FID) in 2021. ENBW plans to build its He Dreiht project by 2025.

DONG Energy has assumed offshore wind costs will fall as larger turbines become available, which will require fewer individual installations and array cables. The economies of scale gained from combining the German projects will also lower costs and the German authorities have also approved the possibility of extending the operational lifetime of the assets to 30 years, DONG Energy said.

"It’s important to note that the zero bid is enabled by a number of circumstances in this auction. Most notably, the realization window is extended to 2024. This allows developers to apply the next generation turbine technology, which will support a major step down in costs. Also, the bid reflects the fact that grid connection is not included,” Samuel Leupold, Executive Vice President and CEO of Wind Power at DONG Energy, said.

"Compared to German power price forecasts available from leading research firms, we consider our price forecast to be relatively conservative. We have applied a higher cost-of-capital than in previous projects to reflect the potential increase in market price exposure," the company said.

Emmanuel Macron's victory in France's presidential election on May 7 is set to usher in a new wave of renewable energy development, according to his campaign pledges.

Macron pledged to double wind and solar capacity and close all of France's coal-fired power stations by the end of his five-year term in 2022. He has also pledged to retain laws introduced in 2015 which aim to cut the share of nuclear power from 75% to 50% by 2025. This could equate to the closure of 25 GW of nuclear power capacity and shutdown dates will depend on growth in wind and solar capacity.

French wind capacity currently stands at 12 GW while solar capacity is around 7 GW. Wind and solar development has been hampered by regulatory and administrative hurdles and Macron plans to simplify the authorization process.

The closure of 25 GW of nuclear power capacity would require around 75 GW of new renewable energy capacity, Jefferies analysts Ahmed Farman and Oliver Salvesen said in a research note April 24.

"That looks quite challenging given that in the last 10 years only 18 GW of wind and solar was installed in France," the analysts said in their note.

Market analysts have highlighted the challenge of shutting down an estimated 25 GW of nuclear power capacity over such a short timeframe while maintaining grid stability. While Macron supports the 2025 nuclear phase-out law, he has not set out a firm position on the phase-out date.

"The lack of a firm position on this issue may be because Mr Macron is well aware that the 2025 target is highly ambitious," Farman and Salvesen said in their research note.

Some 34 of EDF's 58 reactors will soon reach 40 years of operations and the ASN will publish its safety report on the proposed lifespan extensions in around 2018.

Macron has said he would decide on the future of these reactors following the ASN's report.

Separately, the European Commission (EC) has approved France's proposed price support mechanism for small-scale wind farms which could see 15 GW of additional capacity installed in the next 10 years, the EC said in a statement May 5.

The ruling allows France to pay operators a premium on top of the wholesale market price, for wind farms consisting of less than six turbines or 18 MW of capacity. The EC also approved a support scheme for small-scale solar and sewage gas energy projects.

"These measures will help France achieve its 2020 target of producing 23% of its energy needs from renewable sources. They are fully in line with the Juncker Commission's priorities to support investments in renewable energy sources and to ensure that the energy transformation enables [European Union] industry to reach a leading position in low-carbon technologies, thereby fostering green growth and jobs," the EC said.