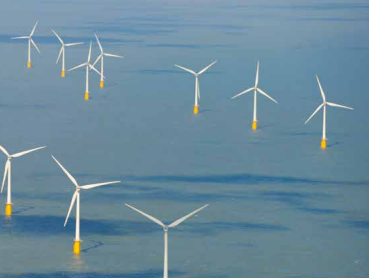 The Crown Estate’s Offshore Wind Operational report 2015 shows there has been a gradual increase in the load factor for the UK fleet since 2004 on the back of more productive wind turbines, wind farms being built at windier sites and improved plant availability.

The Crown Estate manages UK sovereign assets such as offshore territory and closer inspection of the data shows load factor increases have accelerated in recent years when discounted for wind variability.

Globally, some 5.3 GW of offshore wind capacity is expected to be installed in 2015 and annual additions are set to rise to 7.5 GW by 2020, according to the latest World Offshore Wind Market Forecast from consultancy Douglas-Westwood.

The UK had 5 GW of installed capacity at the end of 2014 and, according to Douglas-Westwood , will install more than 11 GW over the next 10 years with most of this capacity expected in place by 2022 following the Round 3 concession process.

“Capital costs have reduced recently, predominantly due to the larger sizes of turbines installed, resulting in less infrastructure (such as support structures) being required. This upsizing presents new challenges for installation contractors but should result in lower operational expenditures once wind farms become operational,” the consultancy said.

As growth accelerates in the UK, The Crown Estate is looking at how it can get the most out of the country’s seabed assets by also publishing more detailed wind measurement data sheets for new and existing wind projects, aiding OEMs, developers, operators and investors.

The table above shows load factors have increased in the last decade using actual production figures. The UK wind index, which measures wind speeds across the country, is shown by the red line. This index varies either side of a mean of 100% but the actual annual load factor, shown by the blue line, can be clearly seen, on the whole, increasing from left to right.

The table below shows how wind speeds can deviate significantly on a month on month basis.

Across the UK, wind speeds varied significantly last year, with February 2014 recording windiness 50% above the long term average and September 49% below the average.

Over the year as a whole, however, windiness was in line with the long term average.
This wide variability in monthly wind resource, leading to only a small deviation from the long-term average over the whole of the year, is typical.

In order to give a clearer annual picture and eliminate the opaqueness from variations in annual mean wind speeds, the Crown Estate also gave the results of a correlation analysis between actual operational data and long-term wind speed data over the last 10 years.

In the table below, these long-term load factors of individual sites have been plotted against the first power date for each project to create the mean trend. The trend is clearly one of performance improvement over time, particularly in the past five years.

However, the Crown estate does not expect this rate of performance improvement to continue in the coming years. Some future UK projects adopting emerging technologies may exceed a 50% load factor, but “whilst further performance improvement is anticipated, realistically it will be at a slower rate than in recent years,” Pritchard said.

Improvements in operational performance have been a key driver of higher load factors.
“Much has been done, and continues to be done, to optimise the performance of existing operational turbines,” Pritchard said.

Pritchard believes that UK will continue to make advancements in a number of areas, but this will result in more marginal gains in efficiency.

The Crown Estate also published in June a newly modelled dataset for the UK’s offshore wind resource, in conjunction with the Met Office. The report created a clearer picture of the UK’s offshore wind resource over a 30 year period, produced at 110 m above sea level at horizontal resolutions of 4.4 km (over the Renewable Energy Zone (REZ) Waters).

The dataset is based on modelled data from between December 1984 - November 2014 and the Met Office’s Numerical Weather Prediction capabilities were verified against on-site wind measurements to provide confidence in the figures.

The higher level of detail provided by the wind speed data is not, on its own, sufficient to make decisions in relation to the design and deployment of O&M services.
However, Pritchard said that it does improve the broad understanding of wind resource within the UK REZ.

“The inherent uncertainty around long term weather forecasting makes forward planning of O&M campaigns difficult. Future work should be directed towards the current re-analysis data to reduce uncertainty and improve modelling.” he said.

Balance payments resulting from intermittency are an increasing cost for turbine operators and this will lead to further energy storage investment. But this is not just an issue for the offshore wind sector.

“Cross-sectoral effort is required to improve the chances of a game changing technological breakthrough,” Pritchard said.