A taxing proposition: onshore wind to be 6 times cheaper than oil for transportation by 2035 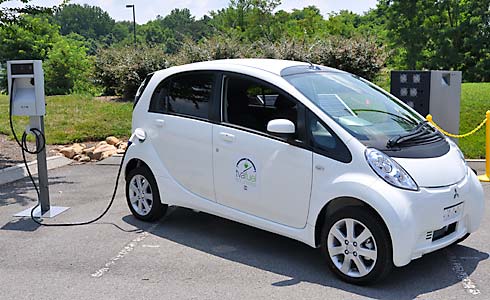 Well known inefficiencies in combustion engines mean ICE vehicles lose over 75 per cent of the energy value of oil, while EVs lose only up to 30 per cent, including transmission losses of 5 per cent on the grid, and losses converting electricity to...

The study, Toil for oil spells danger for majors, by Kepler Chevreux analyst Mark Lewis is based on a more realistic Energy Returned on Capital Invested (EROCI) that compares the efficiencies of various renewable energy sources with that of oil, by looking at the journey all the way to their end use in transportation.

There are several assumptions that underlie the results: a presumed drop in wind capital-costs and a rise in oil prices by 2020 and 2035 and comparisons of transport efficiency.

Well known inefficiencies in combustion engines mean ICE vehicles lose over 75 per cent of the energy value of oil, while EVs lose only up to 30 percent, including transmission losses of 5 per cent on the grid, and losses converting electricity to battery storage and back in the EV.

This results in net energy yields of 25 per cent from oil, versus 70 percent from onshore wind powered electricity.

His conclusion is that by 2035 onshore wind will outstrip oil in net energy produced by a factor of 6 to1.

Of course, the world has been designed for oil-based transportation and would need to be completely revamped for EV transportation, replacing gas stations with charging stations, for example. But Lewis believes that “the balance of competitive advantage will shift decisively in favour of EVs over oil-powered cars over the next two decades.”

“The question is not just for how long and to what extent improving technology can stem the relentless ravages of the natural geological process of decline, but for how long debt and equity investors will be willing to continue funding the insatiable appetite for capital of the drilling-treadmill process,” says Lewis.

His paper cites a comment by Ivan Sandrea, a research associate at the Oxford Institute for Energy Studies in the UK. “Who can, or will want to, fund the drilling of millions of acres and hundreds of thousands of wells at an ongoing loss?” he wrote in a report on the junk debt fuelling the US shale boom. “The benevolence of the US capital markets cannot last forever.”

But that assumes a rational investment market.

Oil investment funded by tax breaks for the rich?

For the accredited investor, oil investment provides unprecedented tax benefits, win or lose. Oil offers one of the best tax incentives available for trusts and the wealthy.

The oil industry offers investors “very nice tax aspects,” says former petroleum engineer Mark Goldsmith of investoil.com. “Generally 80 to 90% of an oil project is expensed in the year of investment as "intangible", so they usually get to write most of the investment off.”

For example, investing $50,000 in a project that had 85 per cent of its costs in Intangible Drilling Costs (IDC)s means the investor can deduct $42,500 from their own taxable income for that year.

These “working interest” deductions treat the investor as if they were actually running the business as the owner. The investor can reduce their own (completely unrelated) taxes by deducting nearly all the IDC costs like a business owner, literally using a self-employment tax form.

“You could be on the other side of the world and you could have absolutely nothing to do with it except write a check and then receive checks in return,” says oil investment advisor Mark Cussen. “Most tax experts that I’ve talked to say oil and gas is the most tax-advantaged type of investment.”

And if the oil project fails, then it’s even more of a tax shelter.

“I have not heard any real talk about it happening anytime in the foreseeable future. It's not an issue that I'm aware of,” says Cussen. “And I get enough oil and gas news bulletins that I would know something to that effect if that was going to happen.”

No matter how much money the investor might ‘lose’ through investment in drilling of hundreds of thousands of wells at ongoing losses, the oil industry is the perfect tax shelter.

Unlike the IDC, wind will never pull in investment dollars, win or lose. The wind industry Production Tax Credit (PTC) pays only for production of energy.

The oil industry IDC has been around in some form for 100 years. Unlike the wind PTC, the oil IDC benefits the investor, win or lose, and is a permanent part of the tax code.

“There is not a lot of danger of them being changed,” says Cussen. “Because frankly the country needs to develop its energy infrastructure and the tax incentives have done a lot to help that happen and in fact we are the second largest producer of oil in the world because we have developed our internal infrastructure. I've heard nothing about them being revoked.”

But if energy tax incentives were not so perverse, clean energy would deliver the benefits suggested by the study.