The South African government has managed to provide a bankable legal framework via its REIPPP initiative for wind energy projects. We assess the current status and the sustainability of this emerging market's growth prospects. 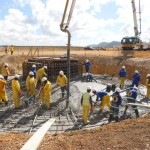 All 60 of Siemens’wind turbines are now in place at the 138MW Jeffreys Bay Wind Farm, one of the first projects to be developed under the government’s Renewable Energy Independent Power Producer Programme (REIPPP). Photo: Turbine foundations being...

The South African Government’s innovative Renewable Energy Independent Power Producer Programme (REIPPP), has been the key piece to the puzzle that makes everything fit into place. Now that projects are making their way towards grid connection, that key puzzle piece is showing the bigger picture of South Africa’s wind sector capabilities as well as that of the greater renewable energy landscape.

Progress is already under way, namely with the February announcement that all 60 of Siemens’wind turbines are now in place at the 138MW Jeffreys Bay Wind Farm, one of the first projects to be developed under the government’s Renewable Energy Independent Power Producer Programme (REIPPP). The project, located near Humansdorp in South Africa’s Eastern Cape, is expected to start supplying electricity into the national grid by mid-2014.With this news in hand; the first results of the programme are coming to into the spotlight.

The initiative has provided a bankable legal framework for projects. The government has fully supported the process and established a transparent mechanism with clear guidelines, ensuring the best technical, legal and project finance advisors were assigned to the programme – providing clear and easily understood rules.

To ensure power was competitive, affordable and sustainable, South Africa opted for a competitive bid process over a feed-in tariff. In addition, the provision of standardised bilateral agreements included a long term PPA with the national utility, backed by a Government guarantee through the Implementation Agreement. Karlsson adds that social and economic development targets were built in to the deal ensuring local rural communities’ and South African workers benefit from each renewable project.

So overall, as Karlsson points out, the REIPPP initiative has so far has been a “successful programme” and within a very short time period has created many opportunities for large scale renewable energy in the country, which did not readily exist prior to its launch.

Burnett says the competitive bidding process has forced prices down more quickly and further than many expected, and this is forcing the whole industry to become more efficient and to re-evaluate their positions in the market.

“We are also seeing increased consolidation amongst developers, which I expect to see continuing over the next year, and through the rest of the value chain. The leading developers and turbine suppliers are also strengthening and refining relationships with suppliers as they seek to entrench a winning formula for future bidding windows,” adds Burnett.

“We are about to see some of the 28 renewable projects come on line in the next few months, including Globeleq’s majority owned projects, the 138MW Jeffreys Bay Wind in the Eastern Cape. These projects will help to diversify the country’s reliance on coal fired power plants, increasing competition in the industry by allowing private power producers to enter into the market using cost-reflective power tariffs and ensuring sustainability of the private sector,” he says.

"At the moment, a lot of the expertise has to come from outside the country due to the industry’s infancy, but it is expected that in time this will change as more education and training can be provided. All mechanical facilities require maintenance, so there is also the opportunity for manufacturing equipment and spare parts to service the plants,” says Karlsson.

Michael Holm, head of marketing and communications at K2 Management, says generally the wind industry in South Africa is in a healthy state with a lot of new projects coming on line and the recent Round 3 had IPP’s offering very competitive rates for power. For the short term, the REIPPP will be concluded as scheduled and if wind can stay at the competitive level and increase localisation efforts, then wind will play a role in the future energy mix here.

He says, “The general social development of South Africa is creating a strong power demand and due to lack of investments in generating capacity; South Africa is experiencing power shortages. Renewable energy can add power capacity within a very short horizon and have proved with the right regulatory and business environment at a competitive price.”

Burnett says the REIPPPP provides a transparent set of rules for all participants – it is onerous, but generally the requirements for submissions are clear. Preferred Bidder scores are made public, so it is a credible process that gives participants and investors confidence.

“South Africa’s shortage in electricity generation capacity makes it an attractive environment to be an independent power producer, especially with Eskom’s troubles in completing the Medupi and Kusile plants. Wind energy is the ideal solution to boost South Africa’s generation capacity in that it is the cheapest form of new-build power currently available here - Window 3: 74c/kWh.

"It is one of the quickest to install (1-2 years), it creates jobs and wealth in remote communities that otherwise see little economic activity, it is plentiful, it diversifies South Africa’s energy mix away from an over-reliance on one technology, and of course supports South Africa’s international commitment to reduce greenhouse gas emissions,” adds Burnett.

There is always scope for improvement, especially in the context of the learning curve, which will eventually have an influence on market dynamics, such as the pace of tariff reduction.

When it comes to the topic of tariff, Burnett is a “little concerned” about the pace of the tariff reduction (Window 1: R1.14, Window 2: 89c, Window 3:74c – a 35% revenue decline in less than two years). He says the bidding process has been extremely effective in getting the best energy price for the tax payer, but it has very quickly created a lot of competitive pressure more often associated with a more mature industry.

“So far I think the industry has dealt extremely well with this, but I hope that quality does not suffer in the process. A decline from Window 1 tariffs was always on the cards, but a more gradual decline may have developed a more sustainable base for the industry over the long term,” he says.

When it comes to the topic of policies, Karlsson says wind generation facilities are obviously not possible if the right climatic environment does not exist, so the country’s current lack of policies is not a big issue.

Obviously, due to domestic coal mining, South Africa has traditionally been building its own power generation on coal and has an established and’ long coal experience’. For the wind industry to thrive and survive here, projects will have to increasingly have a stronger local element to them; through supply chains, skill sets and jobs to justify the ongoing investment into the industry.

Overall Karlsson thinks that the government through its REIPPPP has helped to create a balance of generation diversification and going forward needs to continue to support and encourage this energy mix.